Hiking in Patagonia: TNT treks to the rugged, wild and remote Dientes de Navarino – the world’s most southern trail

Only this bustling port of Ushuaia, Argentina, is a jumble of North Face shops and Irish pubs. My boyfriend Michael and I feel a bit cheated. Shouldn’t the end of the world be more remote?

We cross the majestic Beagle Channel to Isla Navarino, Chile, and get chatting to a couple of Israelis who are taking on the Dientes de Navarino, a five-day trek at the southern tip of South America.

“There are no refugios [mountain cabins] or facilities,” one tells us excitedly. “You have to drink from the streams and camp in the rugged wilderness.”

It sounds unbelievably special. And on a whim, we decide to go for it. 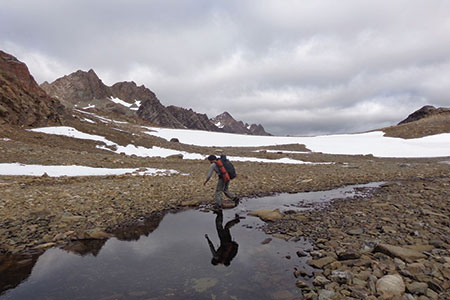 Arriving in the Chilean city of Puerto Williams, we hurriedly purchase gas and supplies. The southernmost town on earth is home to 2000 residents and the Micalvi, a yacht club built on an old iron steam ship. Here, after a few pisco sours (a potent local cocktail with grape brandy), anything can happen. You might even blag your way to Antarctica.

But we have some serious tramping to do. First, we register our departure with the local police station, where we hear tales of trekkers getting snowed in and losing their tents to the howling winds. The weather is unpredictable because of the island’s proximity to Antarctica. Still, we are confident. Naively so.

“Suerte,” the friendly locals call, as we set off for the trailhead. It means good luck.We clutch one rudimentary map, and I’m already feeling a bit clammy under my pac-a-mac. As we set off I think perhaps we are a tad underprepared.

We run into Annie, a petite French-Canadian, venturing out alone. Michael and I exchange concerned glances. Will she be OK? She soon loses us in the thick beech forest of Cerro Bandera. 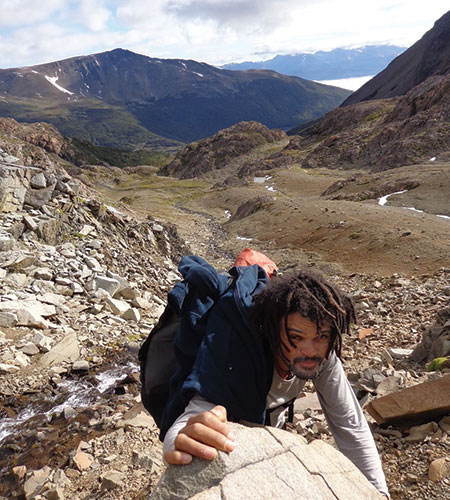 Cliffhanger: Michael’s fingertips decide whether he falls or not

Soon the track comes to an abrupt end. “Do you reckon those piles of rocks mean anything?” I ask. Michael shrugs.

We take the punt, and edge precariously along a narrow mountain pass. My heart is in my mouth as I gawp at the pristine, slate-coloured lake below. It’s as stunning as it is terrifying. “This can’t be the way,” Michael says doubtfully.

We spend the next two hours scaling the peak for an alternative route. There isn’t one. “Just follow the cairns,” a day hiker advises. “Sorry, the what?” I ask, baffled.

It turns out these piles of rocks are, in fact, trail markers. This is useful information. 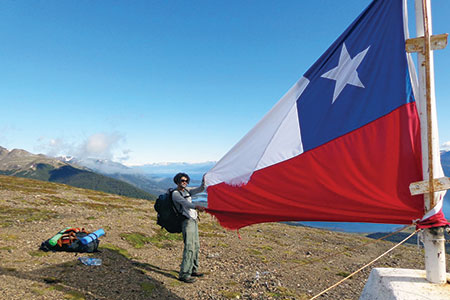 Finally, three hours and one tearful prayer later, we reach the first camp spot. We pitch up on a terrain of mossy pillows and trickling streams, beside Laguna del Salto. We spot Annie, who has woken from her nap after arriving four hours ahead of us. Clearly our concerns were misplaced – she is a machine!Kiwi couple Amanda and Tone have also set up camp – along with two dogs that have followed them in from town. It’s time for dinner.

“What the hell is that?” Amanda asks, eyeing our chunky glass-lidded saucepan. Our kilo of cheese alone weighs more than their entire stash of dehydrated meals and, once again, we feel distinctly amateurish.

We kick off day two by clambering up a gushing waterfall and are rewarded with a spectacular view of the Dientes or ‘teeth’ – the mountain range that gives the trek its name. The jagged toothy spires make a fantastic backdrop as we trudge through thick, icy snow.

At the main ridge, it’s possible to see the Wollaston Islands and Cape Horn in clear conditions, but today mist obscures our view. It’s a similar story when we reach Lago Escondida, or hidden lake, our camp spot for the night. It lives up to its name, playing peekaboo behind thick cloud. 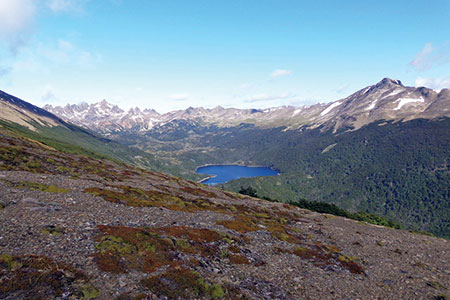 That night as the temperature plummets below freezing, we huddle deep into our sleeping bags. By morning, our tent is covered with ice crystals and we can feel it in our bones.

Soon we are scaling a mountain in biting, buffeting winds. Below the valley is dotted with sparkling, fairytale lagoons. Just one wrong step could send us plummeting to our deaths and at one point Michael is dramatically clinging on by his fingertips. “That would make an awesome photo,” I say, reaching for the camera. “Do I look like I want my fucking picture taken?” Michael snaps. Well that told me.

After that we hop across boulders and side-step beaver ponds and dams. This rodent was introduced to the island as game to be hunted for their pelts, but has had the last laugh, devastating entire areas of forest. 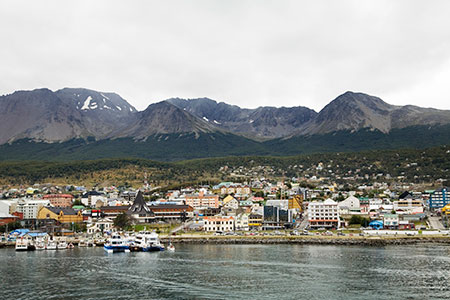 Ushuaia: ‘the end of the world’

Strangely eerie, they are like giant tree graveyards. “This is a world away from Torres Del Paine,” Michael remarks. I nod. Torres is probably the most famous hike in Patagonia, and is overrun with Gore-Tex clad middle-aged Americans, keenly thrusting their trekking poles. Here it’s completely unspoiled and deserted.

We’ve muddled through so far, but on day four it all goes horribly wrong. We haven’t spotted a marker for a while, but we blindly pick up a trail of footprints. Rather than admit our mistake, we traipse further off track. Then we hit forest, bushwhacking through thick lenga branches and roots. We know we’re lost, but we’re just too stubborn to turn back – 10 hours later, we’re quickly losing the light.

“We have to pitch up,” Michael says dejectedly. I agree, reluctantly. Our friends will have crossed Paso Virginia by now and set up camp. They’ll worry if we don’t show, but we have no choice. As I cook pasta on the gas stove, I’m already mentally rationing out our supplies. We suddenly feel very foolish. We don’t have a mobile phone or even a compass between us. The police, and our fellow trekkers, know we are here but I’m still pretty freaked out. 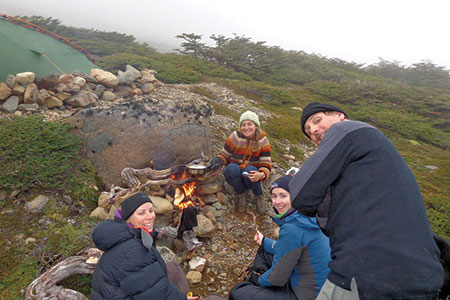 The next morning, after a fitful sleep, we’re ready to retrace our steps. Our limbs are scratched and bleeding, our weary calves screaming in agony. I have a hunch I know the way, but Michael is understandably sceptical – after all, I find shopping malls a navigational challenge. Incredibly, after trudging over yellow, orange and rust-coloured tundra for an hour, we spot a post. “We’re saved!” we cheer, hugging each other joyously.

It’s a strenuous uphill slog to Paso Virginia. At times we’re knee-deep in gloopy, foul-smelling mud. Finally we reach the summit and the highest point of the trek.

Nearly a thousand feet below us, Laguna los Guanacos nestles in a basin of cliffs. The barren landscape looks like the surface of the moon. ”Er, where’s the path?” I ask uncertainly. Michael points straight down.

Every instinct is telling me no. The mountainside is a mass of loose rock debris, and every step triggers another landslide. I take a few deep breaths. Then I clock other trekkers sliding down on their boot heels. 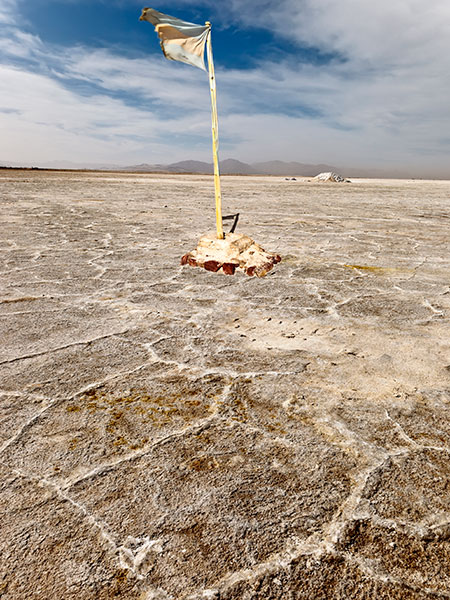 It’s surprisingly fun, like skiing. Afterwards, we trudge through endless boggy meadows and cow pastures and, exhausted, I keep tripping over. At one point my pack gets wedged under a fallen tree trunk, my legs in the air. I don’t know whether to laugh or cry, so I do both.Finally, it’s an 8km schlep along the coastal road back to Puerto Williams and after 10 hours of walking, we’ve finally completed the 53km circuit. First stop, the police station.

“Sus amigos,” an officer says, handing us a note from Amanda and Tone. After sluicing off the mud in a hot shower, we join them at one of the few local restaurants, El Resto Del Sur.

“You’re alive!” Amanda whoops, wrapping us in a hug. “The police were going to send out a search party if you weren’t back by morning,” Tone tells us.

Thankfully it hasn’t come to that and we celebrate with more pisco sours. Michael and I agree – Dientes has been the most challenging and rewarding experience of our lives. But next time we should probably borrow a couple of wise words from the Girl Guides and Scouts – “be prepared”.

Getting there Fly from London Heathrow to Buenos Aires from £644 return with KLM, via Amsterdam and Sao Paulo. A one-way flight from Buenos Aires to Ushuaia costs from £214 with LAN.

When to go: December to February is the best time to tackle the Dientes de Navarino on foot, when the weather isn’t as cold and unpredictable.