Holders Wigan pull off FA Cup upset and down City

In truth, the home side were their own worst enemies with errors gifting Wigan goals. First, Gomez put the Latics ahead with a penalty and an error from Gael Clichy allowed Perch it make it 2-0 after half-time.

A triple substitution from an angry Manuel Pellegrini soon after saw City look to mount a comeback and they hit the post and put Scott Carson’s goal under immense pressure which told after Samir Nasri pulled one back after 68 minutes.

Despite more of the same for the remainder of the game, City failed to find an equaliser, thanks largely to Emmerson Boyce’s brilliant block to deny Edin Dzeko, and a spirited Wigan, managed by former City hero Uwe Rosler, held out.

They’ll play Arsenal in the semi-finals at Wembley and the winner of that tie will face the winner between Sheffield Utd and Hull in the final on May 17.

“Is this my greatest day in management? Probably. This was my chance to partially replicate what Roberto Martinez did last season,” Rosler told BT Sport. “When you play Man City you have to keep your discipline because they see so much of the ball, but we put pressure on them. At the end City had nothing more to lose and they pushed everything at us.

“I felt City’s goal was offside, Joleon Lescott was interfering with our goalkeeper. It should have been offside. But I spoke a lot about bravery, and we also had lady luck on our side.

“Overall I am so delighted. I am so happy for the chairman and the players. And what a block from Emmerson Boyce.” 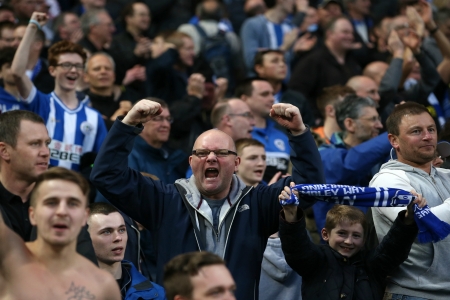 London is full of c*nts, apparently

Video: What a tit – Madonna exposes her breast at gig in Turkey, crowd react disproportionately