Holiday in the Arctic – reindeer-trekking in Finland

We speed through the forest, and I feel like an Arctic pied piper as more reindeer gather in our wake. Suddenly we’re out the other side and into a vast flat clearing; a frozen lake under about a metre of ice and 30cm of snow.

I look around; from all directions reindeer are appearing out of the forest. It’s an extraordinary sight. They’re not tame, but I’m within five metres of them, and they seem happy for Petri and I to wander among them.

Petri Makkus is a Sami reindeer herder, like his ancestors for thousands of years before him. The Sami are the Arctic’s indigenous people and live across a region they call Sapmi, within the Arctic Circle of Norway, Sweden, Finland and Russia. Although descended from a nomadic people that moved with their herds and lived in laavu (teepees), Petri and his family now live in a wooden house in Inari, the largest Sami region in Northern Lapland, Finland. Here, there are 6800 people and 42,000 reindeer.

Petri wastes no time in lighting a fire and cutting off hunks of smoked reindeer meat from his leather pouch. He spears them on the end of a sharpened stick and warms them over the fire. It all seems to happen in one smooth movement; years of habit following centuries of tradition.

“My best moment is when I see the first baby reindeer in May. New life,” he tells me. But there’s a lot more to the herder’s life than calving. There’s rounding up, slaughtering, skinning, hunting predators such as bear and wolverine, and ear-marking, the yearly ritual of cutting the new calves’ ears with a unique herder’s pattern, so each can identify his own animals. Petri explains: “You can see a little of my life in one day, but to really understand the life of a reindeer herder, you must be here one year, through all the seasons.”

Sadly, the Sami no longer wear their brightly coloured traditional clothing, except on special occasions. But Petri still uses curled-toe reindeer-fur shoes, a leather-embossed belt hung with his invaluable knives and a calf-skin hat. 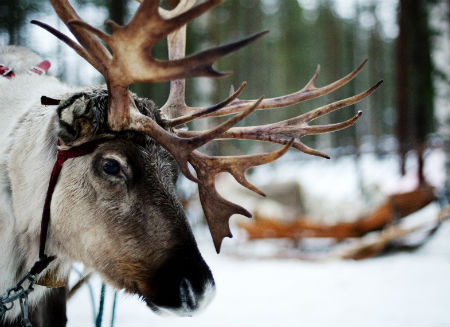 The reindeer are beginning to wander off or lie down to rest, so it’s time for us to go. I bid goodbye to this tranquil spot and we take the jolting journey back through the forest, where glittering snow crystals dance and shimmer on the freezing air.

When we arrive back at the house, the sky is a pale shade of blue, fading towards the horizon into pink and orange, in what seems to be a permanent sunrise or sunset. Petri introduces me to his wife, Kirsi. “The sun only came back two weeks ago,” she tells me, “so I love to go out to admire it.” After the polar winter, even just a few hours of this magical pinkish-blue light must be glorious.

Far removed from the Samis’ traditional teepee, Petri and Kirsi live in two-storey digs with a fireplace and all the mod cons. I ask Kirsi what it’s like being a reindeer herder’s wife. She laughs and tells me: “It’s not just a job, it’s a way of life for the whole family.” She gets involved in the round-ups and their two sons already have their own earmarked animals.

We don’t have long before night sets in so we hop back on the skidoo and hurry to the lake where there are fishing nets that Petri’s father has lain. It’s an ingenious but simple method of ice-fishing which Petri tends three times a week – two holes drilled in the snow about 50m apart, with a fishing net strung between them. Petri begins to pull the net out of the water. He asks if I’d like to try, but I consider my bare hands, at -17ºC, in freezing water and politely demur. “A good catch!” he exclaims. “Perch, pike and my favourite, trout. I will salt it tonight and eat it tomorrow with bread.”

The moon is up now, and the snowy expanse of the frozen lake looks beautiful in the half-light. I have the option of staying a night in the traditional laavu, but am keen to go on a snow-shoe trek, so I thank Petri and ask him if he wasn’t a reindeer herder, what would he be. He smiles, opens his arms wide, looks around and says: “There is no other job for me. Look, I have the best office in the world!”