Holiday on the beach islands of Samoa: Where the body art is as eye-popping as the scenery

Tears spring to his eyes as a team of villagers support his limp body, firmly holding him in place.

Around them, a group of children slap the water to keep a frenzy of butt-flesh-hungry fish at bay.

“At this point I was pleading to god to give me a heart attack so I could die,” Chris Solomona tells me, recalling the scene from more than 15 years ago. “A lot of men commit suicide after the first section of a full-body tattoo.”

Nearby, women weave intricate coconut leaf baskets while men rub sticks together to make fire. Chris is devoted to teaching visitors about Samoan customs and his culture runs deep.

The 45-year-old absent-mindedly rubs his buttocks as he continues his story. The memories of his painful tattoo are obviously as clear to him as the blue waters which surround his Samoan Islands archipelago.

Chris endured the gruelling process in 1998, aged 31. The 12 sections of his complex body art took up to six hours each to complete and, despite warnings from his grandfather, Chris went through four weeks of “agony, pain and pure hell”. 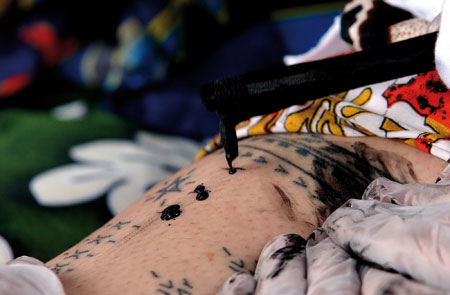 The traditional tattoo covers approximately half of his body – crescent moon shapes run from the hip bones down to the pelvis, his bottom is covered and it extends to his kneecaps, and he has intricate patterns all the way down his right arm.

As he whips out the implements used to mark his body, I grab my own posterior in sympathy.

There’s not a needle in sight. Instead, he shows me sharp tattooing combs made of boar’s tusk and turtle shell plate, and candlenut soot used for the tattoo pigment.

The combs are hit like a chisel with a 23-inch-long mallet and the pain, Chris reiterates, is intense. Once inking begins, there’s no looking back; failure to complete the full dozen sections results in shame so great that death might seem an easier option.

Six strong assistants had to hold Chris down while the revered tattoo artist went to work. “It was the worst decision of my life,” admits the strapping Samoan. 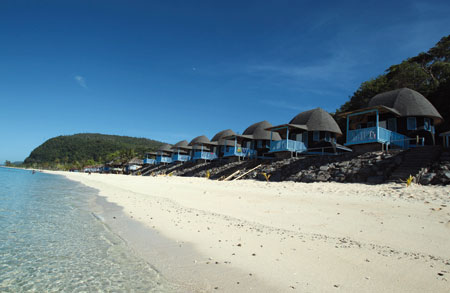 But with its bloody completion came his transition from boyhood to manhood, and a vow of dedication to his family, village and country.

This, in a nutshell, is the beauty of Samoa. Traditional tattoo torment isn’t for everyone, but a strong sense of local pride, family and culture is.

So too is a slow-paced way of life, as I find out the day before when I’m met at the airport by my talkative guide, Anthony, and briefly introduced to local road rules.

So laid-back are the cheery island drivers, the change from driving on the right-hand side of the road to the left, ordered by the Samoan government in 2009, didn’t cause the mayhem you might expect.

Anthony chuckles: “Accidents? Nope… we’re too relaxed for that!”

Despite his insistence that island motoring is a seaside breeze, the 45-minute journey from the airport to Apia seems wild and unpredictable to me. 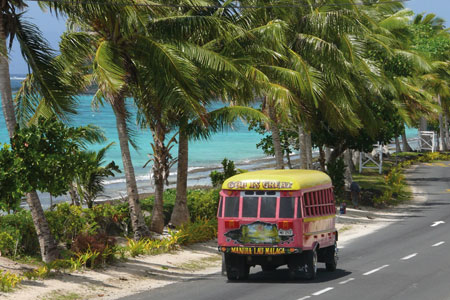 Kamikaze chickens, roaming pigs, daredevil domestic dogs and the occasional human spring from the overgrown roadsides, darting across the road without a sidewards glance.

It’s like Super Mario Cart without the point system. No wonder the Samoans stick to the 55kmph speed limit. Surprisingly, roadkill is rare – a swift toot is apparently enough to keep beasts at bay.

Even the hairy roads don’t stop me from taking in the scenery we pass.

Artists would have a field day painting the vibrant Samoan landscape – if they had the palette for it, that is.

While Apia provides Upolu island’s biggest spread of restaurants, bars and nightclubs, I find the real optical smorgasbord off the beaten track.

My retinas are overwhelmed by an onslaught of colour as Anthony steers his 4WD through backroads filled with vivid red and green tropical plants, fruit stalls and eye-poppingly bright clothing hanging on washing lines.

There’s pride in his voice as Anthony points out his home and, like all young Samoans, shows beloved devotion to both his parents. It’s enough to make a traveller feel guilty about not calling her own more often. 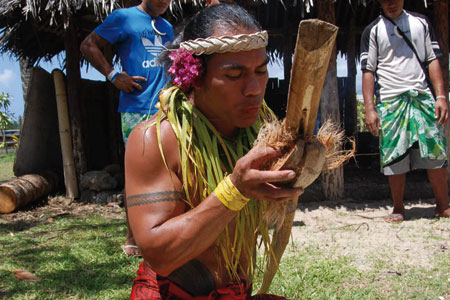 There are 366 villages in Samoa, each with a chief and usually at least two churches. Religion is extremely important and, for this reason, the place shuts down on Sundays.

“If you ever have a one-day stop in Samoa make sure it’s not a Sunday!” Anthony chuckles.

“We like colour,” Anthony says, stating the obvious. Elaborate gravestones sit in front of homes, shrine-like in their size and grandeur.

Family members buried a stone’s throw from the front door is both a sign of respect and a show of generations of property ownership.

The rainbow abodes are a spectacular sight. Our destination, however, is a more European affair. Robert Louis Stevenson’s towering white mansion is now a historic homage to the late Scottish author of Treasure Island. 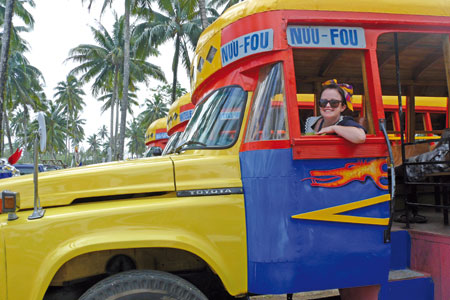 The sickly writer and his family moved to the island so the climate would ease his tuberculosis symptoms. The Samoans fell in love with the good-natured white man – and he with them.

Anthony lures me up the neighbouring Mount Vaea, on top of which Stevenson was laid to rest. “How did the… village people drag… that coffin up here?” I gasp.

Pure willpower and adoration, it seems. But once we’re at the top, the urge to vomit from exhaustion is suppressed by the view – exotic plants and trees that stretch as far as the distant blue sea. No wonder Stevenson loved this joint so much.

Our next stop is on the far side of Upolu island’s south east coast, where expats Wendy and Chris Booth run the Seabreeze Resort (seabreezesamoa.com; double rooms from £166pn).

Like Stevenson, the pair fell head over heels with Samoa and set up their high-end lagoon-fronted resort in 2007. 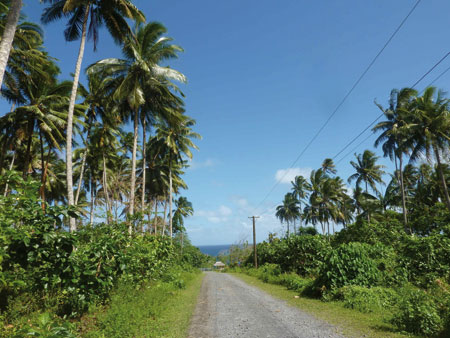 Australian builder Chris and his wife Wendy’s dream nearly came to an end in 2009, when a wave of earthquakes cause a devastating tsunami which decimated the island.

“We were here in the honeymoon suite when it hit,” Chris says. “We held on to trees to stop [ourselves] from washing away.”

The suite, award-winning restaurant and adjacent rooms weren’t so lucky. Standing in the newly rebuilt deluxe suite, it’s hard to imagine the extent of what happened here, but Chris says he and Wendy were determined to stay put: “Leaving didn’t cross our mind – it could be a thousand years before the next one – and we love it here.”

Further along the coast, I chat to Koroseta Legalo, the owner of family-run business Faofao Beach Fales (chalets from £19pn; wsamoa.ws), who also lost much of her livelihood.

“We didn’t have any warning… we saw the water sucked out to sea and ran,” she says. But in spite of the painful memories, today she is all smiles, the disaster far behind her.

Fales, the traditional Samoan huts, are encased only with banana leaf thatching.

I’m to spend the night in one and I can’t lie, I’m petrified about having little but foliage between me and the waves.

But despite an offer to bed down in the alternative multi-storey accommodation block, I decline. This Samoan experience can’t be passed up and so I bunker down in the open air.

It’s such a refreshing night’s sleep that with first light comes a fear conquered, a crab in my trainers and a vow to do it again.

A chance comes sooner than expected, as fale dwelling is the sole form of accommodation available on Manono Island, a tiny dot between Upolu and Samoa’s other main island Savai’i, accessible only by a 20-minute ride in a small tin boat that I catch from the Manono-uta jetty the next day.

This place is the epitome of simple, Samoan living – there are no dogs, no cars and a minimum of technology. It’s even tough to find a shop selling bottled water, but red cordial-filled plastic bags seem to generally suffice for hydration purposes. 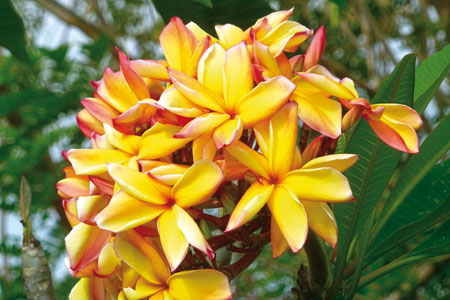 A stroll around the island takes 90 minutes – longer if you stop and oblige the endless stream of children pleading “Pue-ata” (“capture my smile!”). As I explore, I find myself almost overwhelmed by this sleepy, remote world.

Their boat is moored a few hundred metres out and they’ve decided to swim ashore. Islanders welcome them without hesitation, and we all sit around a star-lit table to dine together.

Generosity seems to come naturally to the Samoans we’re eating with and, when it comes to physique, big is beautiful here, so there’s no option but to abandon concerns about your girth and go with it.

We all dig into a feast of fresh lobster, battered tuna steaks and local delicacy oka (raw fish in lemon and coconut milk), which everyone shares.

Maybe it’s the stunningly fresh food, the cheerful company or just the picturesque island setting, but this is definitely one of the most memorable meals I’ve ever had.

I return to the mainland the next morning to catch my flight home, feeling a little heartbroken to have to say goodbye. 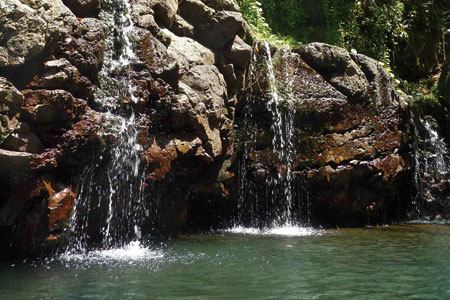 As the plane takes off, a pair of fishermen abandon their hooks, look up and wave at my plane.

By this stage, such a farewell doesn’t even seem remarkable.

Genuinely enthusiastic from “talofa” to “tofa soifua” (Gagana Samoan for hello and goodbye), these people are beyond welcoming and happy to share their world with the rest of the globe.

I look forward to my next chance to revel in its simplicity.

When to go: It’s best to visit Samoa between May and October’s dry season – this is also when most of the major festivals are. Christmas and New Year gets busy as many Samoans who live abroad return home for the festivities.

Accommodation: Find modest, closed beachfront fales at Taufua Beach Fales, or an open option for a night with the breeze in your hair (samoabeachfales.com).

From £18pppn based on three or four sharing. Overnight stays include dinner and breakfast.

Virgin Atlantic flies from London Heathrow to Sydney from £1270 return. Catch a connecting flight from Sydney to Apia with Virgin Samoa from £192 return.

Looking to plan a trip? Head to TNT Tour Search where you will find some incredible deals. What are you waiting for?!

Rugby: All Blacks’ Sonny Bill Williams to start against Tonga

The best of Ireland