Honeymoon man killed by shark in Seychelles as wife watched

A British man was killed by a shark while on his honeymoon on the island of Praslin, in the Seychelles. The attack was witnessed by his new wife, who was sunbathing on the beach.

The couple had married 10 days before and headed to the Seychelles resort – a favourite for honeymoons.

Ian Redmond, 30, was snorkelling 30ft off Anse Lazio beach when he was attacked by what is suspected to be a 6ft tiger shark.

According to reports, Redmond lost one arm, had the flesh stripped from his thigh and had holes in his chest and stomach from the shark’s teeth. 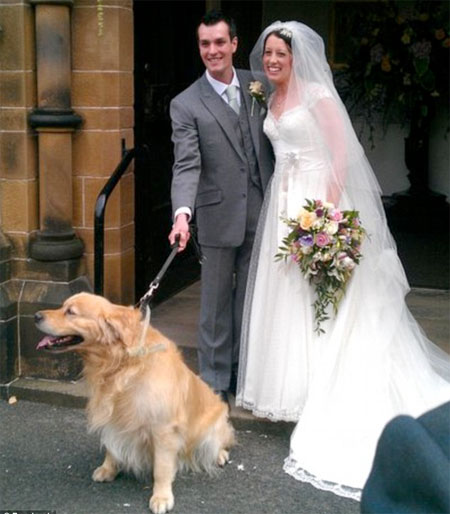 Ian Redmond was attacked and killed by a shark while on his honeymoon in the Seychelles. Pictures here on his wedidng day with wife Gemma Houghton. (Facebook)

Redmond’s new wife Gemma Houghton, 27, was sunbathing on the beach when she heard her husband’s screams and realised he was being attacked by a shark.

Houghton and others on the beach could only watch in terror as Redmond was mauled by the shark; unable to respond to his cries for help.

Eventually, two men on a catamaran were able to help the injured man and he was taken to hospital, where he died from massive blood loss.

The shark attack is the second to happen on the Seychelles island in less than a fortnight. On August 2nd a French diver was killed in a similar way.

On the day Ian Redmond was killed the Seychelles government was holding an emergency meeting to plan what to do about the earlier shark attack.

Last night specialist shark hunters were being flown in from South Africa to track down the killer shark.

The Seychelles government has closed at beaches in the area and banned swimming in the waters near where the shark attack occurred.

According to a witness, others on the beach tried to keep Redmond’s wife from seeing the injuries inflicted on her husband.

"I saw the swimmer, who was missing a huge chunk of flesh from his left leg, so much so that I could see the bone of his thigh. He was sickeningly pale, but still had his flippers on both feet,” the witness said.

"At this point a woman ran over and started screaming. She said: ‘That’s my husband!’

"Someone grabbed her and tried to keep her away. People all over the beach were just hugging whoever was close to them or trying to keep any children from witnessing what was going on."

"The damage was too great. We kept his wife away from the body because it was too horrific for her to see."

Another beachgoer described how Houghton was too shocked to cry, appearing not to register that her new husband was dead.

It is thought that the attack was carried out by a tiger shark, a species which is common around the central Pacific waters.

Tiger sharks – which can grow to over five metres and weigh more than a tonne -have been responsible for a large proportion of shark attacks on humans.

However, the attack was a freak occurrence in the Seychelles, where sharks are rarely seen due to a protective coral reef.

It has been suggested that global warming, along with damage cause din the tsunami, may have eroded the reef, making shark attacks in the area more likely.

Whitsundays win it at the Australian 2014 Golden Backpack Awards

Roll up! Roll up! The TNT team runs away with the circus and puts their physical limits to the test