How to get the best out of Sofia in a weekend

09:00  There’s a strong sense of East-meets-West in Bulgaria’s capital, with Ottoman architecture round the corner from shiny new bars and clubs. Start with the East, and head to Banya Bashi, on Maria Louiza Boulevard – it’s the only remaining mosque in the city. The typically Ottoman architecture – its bathhouse, red minaret, huge dome and hot-water drinking fountain – dates back to 1576.

11:00  To get your bearings, take a free Sofia walking tour run by volunteers. They meet twice a day, every day, at 11am and 6pm at the Palace of Justice, which has an impressive columnated exterior. The city is easily walkable and you’ll get to check out most of its big landmarks – via the ornate Ivan Vazov National Theatre and Holy Synod Palace, plus the imposing former communist party headquarters – and end up at the National Assembly.

13:30  For lunch, chow down on some traditional Bulgarian food at Pri Yafata, decked out with farming tools, patterned rugs and rifles hung on the walls. Pick meaty dishes of rabbit and duck from the menu, or opt for one of the many veggie dishes. Sofia is ludicrously cheap, and here you can get main meals from £2.50.

15:00  Time to get creeped out at the Peyo Yavorov House-Museum on ul. Rakovski. It was the home of the Romantic poet and revolutionary (1878-1914) and the apartment’s three rooms have been restored to their former state. Items on show include Yavorov’s death mask, some unhappy-looking photographs of him and his wife, Lora, and the dress she was wearing when she killed herself in the study. Entry costs about 41p.

18:00  After that bombshell, lift your spirits with a visit to Pl Bulgaria park in the city centre. There you can pick up a beer from one of its kiosks and kick back on the grass to soak up some evening rays. Or pay a visit to the northern end, where you’ll find the 1300 Years Monument, built to celebrate the first Bulgarian Empire, and the nearby memorial chapel dedicated to the 10,000 victims of the communist regime. Just next to it is part of the Berlin Wall.

19:30 Start your night out on Shishman Street, where drinking venues abound. Grab some drinks and a cheese plate from One More Bar – the trendy hotspot is in a restored old house and perfectly described by the words ‘shabby chic’. There’s also a chilled-out garden there for the summer months.

23:00 Find your clubbing fix under the neon lights at the swanky Chervilo. The venue, which is a huge hit with students, hosts live music, R&B club nights, parties and has a kick-ass terrace.

02:30 Get some kip at the cheap but comfy Red Star Hostel. Beds cost from £7 per night and there are both private rooms and a dorm. 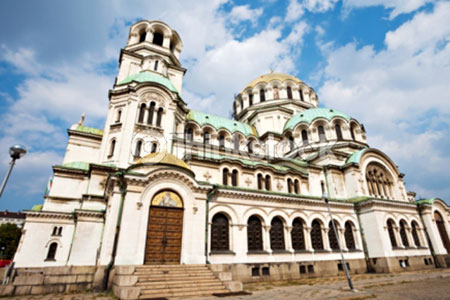 09:30  Carb up after a heavy night at Sladak Svyat on ul. Alabin. The bakery serves bread rolls and cakes, but you can’t go to Bulgaria without trying banitsa – the national dish is a mix of eggs, cheese and filo pastry and costs about 25p from here.

10:30  Hit the Mineral Baths on ul. Triaditsa, also known as the Turkish Baths. Not only will this be a good spot to try and soothe a hangover, but the ceramic representations of medieval churches inside are amazing. Just outside is Aleksander Nevski market, which is good for a browse – artists sell their paintings alongside souvenirs, jewellery, embroidery, plus real and fake Soviet memorabilia.

13:00  For a mega-cheap lunch, go to the travellers’ oasis of sustenance that is Dream House. The veggie eatery, found in a small shopping arcade, has an all-you-can-eat buffet on Sundays for £2.

14:30  Leave the centre of the city for some adventure in the fresh air at  Kokolandia forest amusement park, with rope climbing, tree-top courses and rock climbing walls, as well as miniature golf and a bar. Do you dare to try the tougher ‘over 18’s’ zone of the woodland obstacle course? Harnesses are provided, and admission costs £1.20. The park is open from May to October.

21:00  End your trip sitting among the copper vats at Pri Kmeta. The microbrewery serves its own Kmetsko beer by both the litre – and metre. Brewing courses are available for about £4 on the last Monday of every month, and they involve tasting, too. It’s pretty cheap to drink here, with beers costing from 90p.