Everyone’s talking about the Olympics, but London 2012 sure ain’t the only UK-based sporting event worthy of your time this year. In fact, we’ve discovered an ‘alternative Olympics’ taking place around the villages (and, mostly, pubs) of England this summer. Take a tour of these fringe tournaments – from shin kicking to toe wrestling – and discover a whole new side to British sportsmanship.

If rolling around in a paddling pool of Lancashire gravy weren’t excitement enough, contestants in these bonkers bouts are required to wear fancy dress, too. Held at the Rose N Bowl pub in Stacksteads, Lancashire, wrestlers grapple for two minutes and achieve a handful of points for various moves, with the highest scores being awarded for ‘fun factor’ – loudest applause, best costume, etc. A further sign that the ‘wrestling’ part of gravy wrestling isn’t taken enormously seriously comes in the form of penalty points for ‘roughness’. If you turn up to the event on August 29, be aware that ‘bawdy behaviour’ is frowned upon, too.
worldgravywrestling.com

Scoff if you will at the concept of a shin kicking tournament, but this sport has more to do with today’s Olympics than you might think. The British Olympics Association stated in its bid to host the 2012 Games: “In 1612 in the tiny village of Chipping Campden, Robert Dover opened the first ‘Cotswold Olimpicks’ … The sports included … jumping in sacks, dancing and even shin kicking.” Today, this 400-year-old tradition lives on at Dover’s Hill, near the Gloucestershire village. Competitors grab each other by the shoulders and pound at each other’s shins until one falls to the ground in pain – though they can stuff their trouser legs with straw for protection. Catch this year’s shin kicking tournament at the Olimpicks on June 1. olimpickgames.co.uk 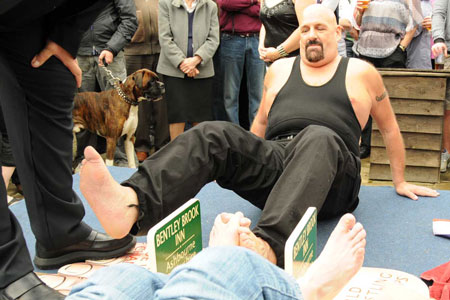 Far from being grumpy about our lack of sporting prowess on the world stage, Staffordshire landlord George Burgess good-humouredly invented the World Toe Wrestling Championship in 1976, in the hope that England could become world-beaters in at least one sport. A Canadian won the inaugural event. Undeterred by this small humiliation, the championship has continued annually ever since, now taking place at the Bentley Brook Inn of Ashbourne, Derbyshire. The sport entails locking toes with an opponent and attempting to force their digit to the ground over three rounds. Seven-time champion Paul ‘Predatoe’ Beech is returning for another stab at the title at this year’s championship, on August 25.
bentleybrookinn.co.uk

Resurrecting the War of the Roses for the modern day (that’s Lancashire vs Yorkshire, not Turner vs Douglas), competitors hurl black puddings in an attempt to knock a collection of Yorkshire puddings from their perch on a 30ft-high plinth. Held outside the Royal Oak pub on Bridge Street in Ramsbottom, Lancashire, the event has drawn sportsmen from as far afield as New York and South Africa. Anyone can join in this year’s contest on September 9. Whoever knocks down the most Yorkshires goes home triumphant.
calendarcustoms.com 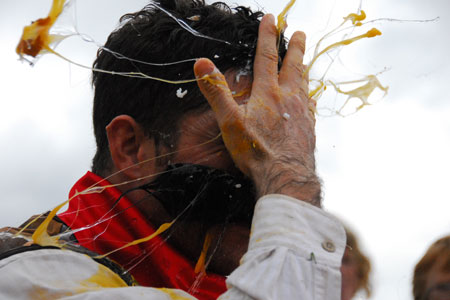 Oddly, the World Egg Throwing Federation reckons that the ‘sport’ has been “enjoyed by millions of people since early humans discovered the delight of watching a failure of another to catch a tossed egg”. This year’s world championships on June 24 in Lincolnshire demand teams create egg-hurling devices that will launch eggs at speeds of up to 120mph. To score points, a team member must either catch the launched egg without breaking it, or get hit by it.  Competitors and spectators alike are served by a mini beer festival with 12 types of ale from nearby Swaton, Heckington and Sleaford microbreweries, helping everyone remain focused.
eggthrowing.com

More on travel around England at visitengland.org

The five types of job hunter