In Reykjavik, the wetter the better: From geysers and waterfalls to blue lagoons, Iceland’s array of geological wonders is dazzling

When you’re not watching geysers spurting 30m-high jets of boiling water from deep within the earth’s core, you’re gazing at fog rolling over the lava fields, clouds curling around the snowy top of Mount Esja, spray kicking up from tremendous Gullfoss waterfall or vapour rising from the geothermal Blue Lagoon.

When I catch my first glimpse of Reykjavik’s ever-present mist, on the drive from Keflavik Airport to the city centre, I have to admit it looks bleak.

The wintry sky is a swirl of brown and grey clouds, split by only a few streaks of pale light.

All I can see through the coach windows are endless muddy, rocky plains.

But a couple of kilometres into the drive I get a sudden jolt when I spot a series of dark, sinister figures standing motionless on the hills.

As I get closer I can see they’re just piles of rocks, small stones at the top to represent heads and huge ones underneath for bodies. 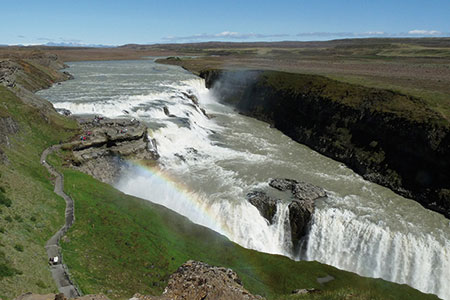 I get it: beautifully simple, their presence transforms the damp landscape from dull and grim to a starkly beautiful work of art.

Icelanders seem to have a knack for producing incredibly inventive artworks that bridge the gap between people and their environment.

Later on that afternoon I take a walk to the Hallgrimskirkja Church, which sits at the heart of the city centre.

Shaped like a volcano, it has swooping ridged walls that resemble flowing basalt lava, but also look a little like the pipes of an organ.

At the top of the church is an observation deck from where you can see the North Atlantic Ocean on one side, mountains in the backdrop, and down below, hundreds of Reykjavik’s idiosyncratic small white houses, the roofs all painted in the blue, red, green and yellow palette of a cheerful suburban leisure centre.

The following morning I’m keen to see some of the region’s geological big hitters, so I join a Golden Circle bus tour. 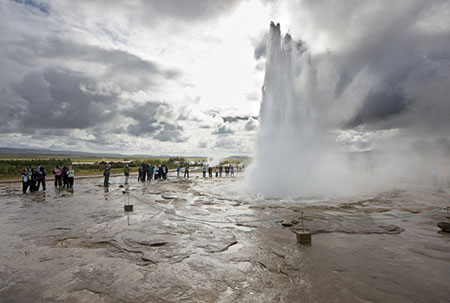 Our first stop is at Thingvellir, where Iceland´s first National Assembly was held in 930AD – and you couldn’t dream up a more imposing place to lay down the law of the land.

Thingvellir is part of a fissure zone that runs through Iceland, on the tectonic plate boundaries of the Mid-Atlantic Ridge.

Next up is the geothermal geyser field.

This zone is covered in hot springs, some of which bubble like a murky witch’s cauldron, and others of which fling torrents of boiling water into the air.

The main attraction is the Strokkur geyser, which has powerful gushes every five minutes or so that reach up to 30m high. A weird, eggy smell of sulphur hangs over the whole site, which comes from the minerals in the water. 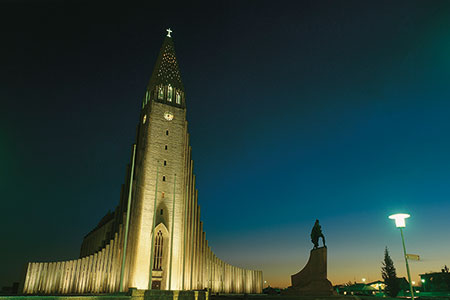 As the air is heavy with water vapour, the whole effect would be utterly otherworldly if it wasn’t for the ring of visitors standing eagerly in the puddles, all with cameras held aloft to capture the moment.

It starts to drizzle, so we make a quick final stop of the day at Gullfoss, Iceland’s dramatic waterfall.

The cascading waters fall over a three-step ‘staircase’ and apparently, on sunny days, rainbows form over the top.

Today, sadly, is not one of these days, so through the increasingly heavy rain, I retreat to the bus. 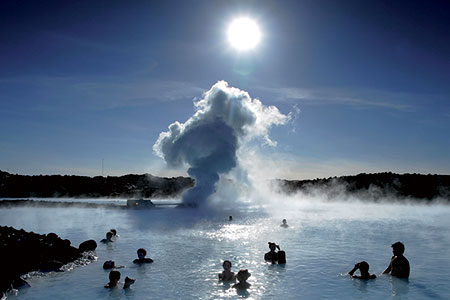 The last place on my itinerary is the Blue Lagoon, a geothermal spa set in a lava field. Gentle mist hangs over the mineral-rich, milky-blue waters – inviting isn’t the word.

Swimsuit-clad, I scamper as fast as possible through the icy air and plunge straight in to the hot water.

It’s an incredible sensation and as I look around, everyone else in the lagoon looks just as blissed out as I feel, luxuriating in the hot water, floating on their backs, and smearing silica mud from huge wooden buckets onto their skin.

After a few minutes – of course – it starts to rain.

Freezing droplets fall on my scalp, steam swirls around my face, and the rest of my body is toasty warm under the water. In a land of ice, fire and water, this must be as good as it gets.

Fly from London Gatwick to Reykjavik with Iceland Air from £217 return. 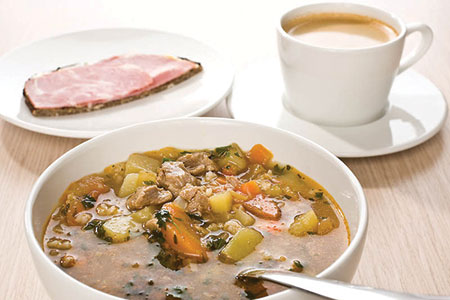 Budget:  The best value place to get dinner in downtown Reykjavik has to be Noodle House, where you can get a huge bowl of tasty Thai-style noodle soup made with fresh ingredients. Mains from £4.

Midrange: Want a taste of real Icelandic cuisine? Head to Cafe Loki, which serves up dishes such as mashed fish and sheep head jelly. Got the stomach for it? Mains from £6.50.

Luxury: Fish Company has a popular ‘Around Iceland’ set menu with taster dishes from across the country, including Icelandic lamb and plaice. It doesn’t come cheap though, at £50 a head. 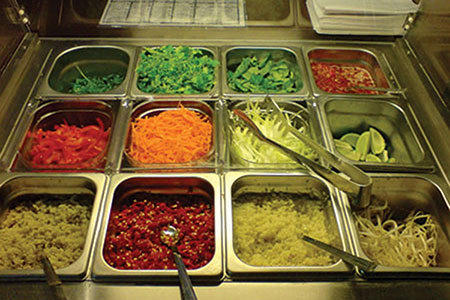 Budget:  Drinking isn’t particularly cheap in Reykjavik but you can get a good happy hour deal on beers in Íslenski Barinn between 5pm and 7pm each day when beers start from £2.30.

This low-key spot is decorated with old pictures and artefacts from 20th-century Iceland.

Midrange: Koffin displays an ambitious sign saying ‘Sushi and Disco’ outside, but inside there’s more of a cafe vibe, with people lounging on cushions, chatting or working on laptops. A pint of beer is £4.Laugavegur 2 (tel. +354 551 1855)

Luxury: Kolabrautin is on the fouth floor of Reykjavik´s Harpa concert hall, an ultra-modern glass building looking out to sea, and attracts an especially well-heeled crowd. A bottle of house wine is £29. 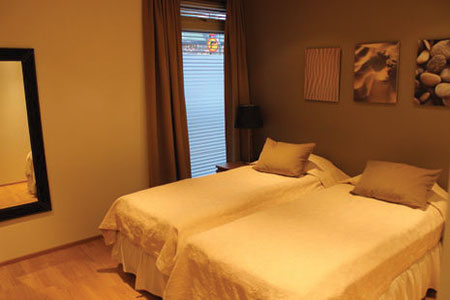 Budget:  Housed in an old biscuit factory in downtown Reykjavik and furnished with salvaged materials and second-hand odds and ends, KEX is a quirky place to stay. Dorm beds from £13pn.

Midrange: If you want to stay slap bang in the middle of all the action, book a room at Hotel Fron, which is located on the main shopping street of Laugavegur.

The rooms are simple, but come equipped with basic cooking facilities, perfect for if you’re trying to cut costs. Single rooms start from £60pn.

Luxury: The super-sophisticated Hotel Borg has won a handful of awards, and is set in the beautiful square of Austurvöllur across from Althingi, the Icelandic parliament and the cathedral. Rooms from £94pn.