He was there on the ground floor when Twenty20 cricket took over 50 over one-dayers as the shortest format. In June 2003, the year T20 took the sport by storm, the swashbuckling Gloucestershire batsman demolished Warwickshire’s bowlers to all corners of Edgbaston to score Twenty20’s first ever top level century from just 50 balls.

A decade on it’s an integral, lucrative and hugely popular fixture on the international calendar with Tests and ODIs.

For almost just as long, Last Man Stands cricket has been doing for social sloggers what T20 has been doing for the pros in an even more condensed form, with rule amendments that maximise each player’s chance to contribute and the speed of play – a game clocks in at little more than two hours.

Now, since it was formed in London in 2005 by Bjorn Briggs and Wayne Greve, more than 30,000 people play in LMS competitions around the world – there are 1700 franchises in five countries and 7500 players in England alone. Harvey has signed on as an LMS ambassador, and who better to endorse the form.

“It’s a fantastic concept,” he says of the largest amateur cricket league in the world. “I didn’t realise how big it was. One of the great things is that it takes just two hours. People who don’t have the time on their hands to play on the weekends or even a full Twenty20, they’re in and they’re out – it’s a great way to keep people in contact with the game.” 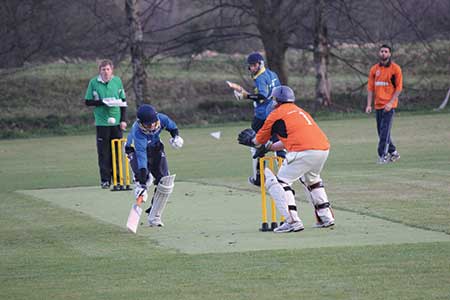 Not worried that ‘fast food cricket’, as some critics call it, will take over the game as a whole, Harvey, who also played in the first Indian Premier League in 2007, believes all forms can work together simultaneously.

“The purists of course love the long form of the game, the Tests – I wasn’t lucky enough to play them, but it’s the ultimate in cricket,” he says, with a career of 73 ODIs for Australia, an average of 31.93 in T20s and the distinction of having one of the best slower balls in cricket to his name.

“T20 has transformed the game, right the way up through all forms,”Harvey says. “The range of shots we now see in the IPL and Big Bash, and the range of deliveries bowlers need to come up with to counter those skills, is great for the game. And at a social level, the more people who are encouraged to play in formats like LMS the better.”

Harvey will show he’s still got it when he lines up against his old England foe Darren Gough at Lord’s Nursery Ground on May 24 as part of a LMS celebrity match to mark the start of the new summer season this week. LMS is giving players who register before Friday, May 17 (see details on opposite page) the chance to play with them at the home of cricket.

“It’s a great chance for a social player to have a run at a place about as special as it gets in cricket,” Harvey says, adding a wrap for his opposing skipper. “Goughy definitely got me out a few times and hit me for a few sixes, so whoever’s on my team will have to keep an eye on him.“

Just like T20s, ODIs and from next year Test matches have their own world championship, LMS has its own, this year in London, with 96 teams from all countries entering and the final to be played at Lord’s on September 4 for £10,000. 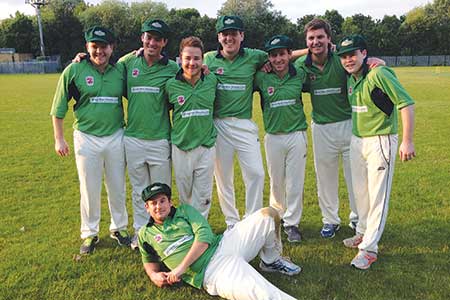 Andrew Williams with Southwark’s The Wombats

But the bread and butter of LMS is those keen to get bat on ball after a hard day at work. Andrew Williams, star opening batsman for a team of mostly Aussies called The Wombats, says it’s an ideal format for busy City workers.

“Most of our team works in the City, and we have a couple of teachers, and most just don’t have the time to play at the weekend,” he says. “But after work for a couple of hours is fantastic.”

Another unique aspect of LMS is the stats database which means all players everywhere in the world can see their bowling and batting figures online, just like the pros.

Williams, who moved to London from Brisbane, goes into this year’s competition as the top-ranked batsman in England after the incumbent, Russell Collett of Wandworth’s Old Seagullians, returned to South Africa.

Wombat Williams, who in 14 innings has been retired 10 times on 50 runs (see box), takes the distinction with a pinch of salt. “The figures can be skewed, depends on the quality of the comp, size of the field etc, but it differentiates the comp from others,” he says. “Everyone says they don’t care about the stats but if they aren’t updated online 100 per cent correctly they’ll notice and let them know. It’s good fun.”

With smaller teams on a full field, fast and true playing synthetic wickets and other variations on the game, tactics come into play, but they mean everyone plays a part. “When it comes to batting there’s nowhere to hide,” he says.

“I don’t know that I’ve ever been in a game when everyone didn’t get a hit. And because there’s only eight-a-side there’s a lot of gaps in the field, so bowling with accuracy and to your field is a lot more effective than raw pace. There’s never a moment you’re not involved.”

To be in with a chance of playing in a team captained by Harvey or Gough, quote TNT when you register your LMS team online before May 17. For your nearest competition visit  lastmanstands.com 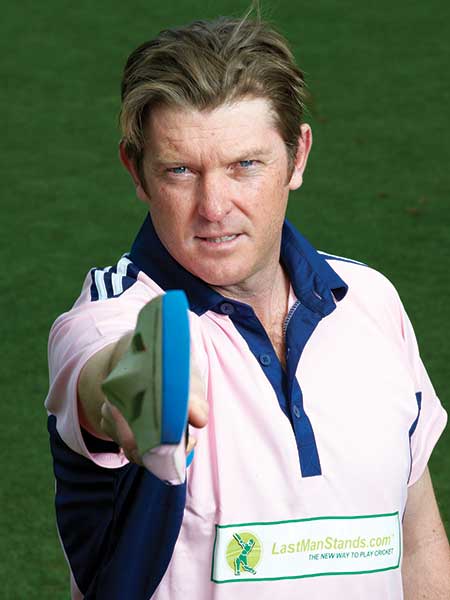 Michael Clarke’s Australians go into both the ICC Champions Trophy (from June 6 to 23 with games at London’s Kia Oval, Birmingham’s Edgbaston and Cardiff Wales Stadium) and the Ashes (starting July 10 at Trent Bridge) this summer as rank underdogs, says former international Ian Harvey. The ODI and T20 legend gives TNT his predictions.

Who are the favourites for you? “You can’t go past the Saffas at the moment in any form of the game. They have the best squad going around. Great depth.”What about England? “They’re going great in one-day cricket and are of course the other team to beat. Playing at home you can’t discount that.”

And the Aussies, the holders of the trophy after beating New Zealand in the 2009 final? “Australia’s always in the running, especially in limited overs. But on current form, it’s hard to know which version of them is going to turn up.”

Was the drawn series in NZ a blip or a sign of weakness for the English? “England deserve the great run they’re having for what they’ve done behind the scenes over a period of time. I don’t take too much from NZ, they were pretty flat tracks. All credit to New Zealand for the way they got into winning positions.

Brendan McCullum is a real pressure player and a class leader.” Does Australia have a chance of not being embarrassed over five Tests? “Australia looks unsettled. There’s a really good group of young bowlers, but they have to keep them fit on the field. The batting line-up must do better.

”What did you take from the squad announced, including two 35-year-olds? “Chris Rogers is a terrific selection, a player who’s performed over a long period and earned his shot. Brad Haddin will do a good job too. I don’t care how old a player is, you have to pick the best ones available and give them a chance to perform.” 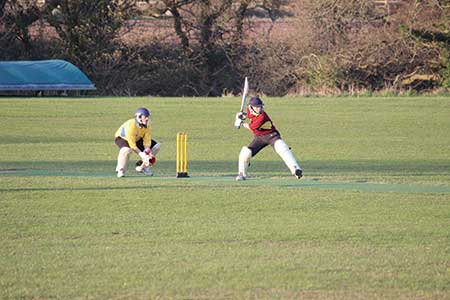 Length: 20 overs a side, 65 minutes only per innings. Penalties apply

Last Man Stands: A team is out at the fall of the eighth wicket. The ‘last man standing’ after the seventh wicket bats alone

Double Play: Two plays can be out from one delivery, ie. when one batsman is caught the fielder can run out the other

Five Ball Over: Five balls per over, with a max of six (except in last over). The first wide or no ball is one run, more are three runs

Free Hit: Every no ball or wide is followed by a free hit

Home Run Rule: A six off the last ball of an innings is 12 runsRetiring: Batsmen retire at 50 but return when all others are out

To be in with a chance of playing in a team captained by Harvey or Gough, quote TNT when you register your LMS team online before May 17. For your nearest competition visit  lastmanstands.com

The Pogues and ?the Buzzcocks, Old Royal Naval College

The Artist leads the Bafta pack with 12 nominations