How does it feel to be playing Jesus?
It’s been an ambition for so long and it’s a part I’ve always wanted to play. I don’t think it will ever get old for me. As long as they keep asking me to do it, I’ll play Jesus. For me it’s the perfect part, there is massive high drama, there’s an amazing opportunity to act and sing, and within that, we’re performing it in arenas, which had never been done in the UK. The show is just beautiful and to be part of it is phenomenal. I would do it until my dying day.

Tell me about how you got cast in the role of Jesus?
Well basically, at the beginning of last year, I saw an opportunity come up for an Andrew Lloyd Webbers and ITV show called Superstar. It’s kind of like an X Factor -style, talent competition and basically I put my name online and got an audition and queued up with thousands of people. I fought my way through nearly five months of competition and somehow won which was really good, then went straight into rehearsals. It was brilliant, but absolutely terrifying.

Was that your first time on reality TV?
I had been on X Factor around four years ago and got down to the final 12 boys, but it was a different process and looking back I am so pleased that I didn’t get further. I found it’s a completely different show to what you’d expect, it isn’t just looking for an artist, it’s looking for a personality and someone with a story that will make people vote, whereas this process [ITV’s Superstar] really was just looking for Jesus and someone who was suitable and capable of playing the role. So it was a better TV show in that sense, for me, because it related to talent. It wasn’t about whether I could make someone cry with my story, so I was really pleased i didn’t make it onto the live show – in retrospect.

How is this production different to the ones we’d be used to?
Well the biggest difference is that it’s set in the contemporary world so when you meet everyone it’s in an environment that everyone will know and recognise. There’s a recession all over the world and there have been riots and demonstrations. So in that respect it’s the most relatable that the show can ever be. It’s hard to relate to Jesus and the other characters if i was to stroll on with a loin cloth and sandals. It’s hard to imagine what it would be like all those years ago when Jesus is healing a leper, yet in this production I am wearing jeans and a really nice shirt and coat. And instead of healing a leper I am healing a HIV victim or a prostitute. It makes it more relevant and I can kind of get into the role a bit more, and for the audience it makes it a bit more exciting.

How do you prepare for a role like Jesus, what do you draw upon?
When we first sat down and talked about it, we talked about how easy it is to fall into a part where it becomes almost an ethereal chandelier that is supposed to walk on stage and sparkle, but not really move. I am not playing Jesus ‘the God’ or the Jesus who everyone believes in, I am playing him as a human, when he was alive and when he was trying to get people to believe in him. You know, humans have flaws, they make mistakes, they have feelings and so I wanted to play all of those emotions. I play him as a human and I am happy because it gives me more of a contemporary part to act out.

Are you still strapped to the cross half-naked?
Well yes, but it’s done so beautifully at the end, it’s amazing. I’m not in a loin cloth. Yes, I am half-naked and I do have a crown of thorns, but it’s barbed wire and I am strapped to a very big cross. 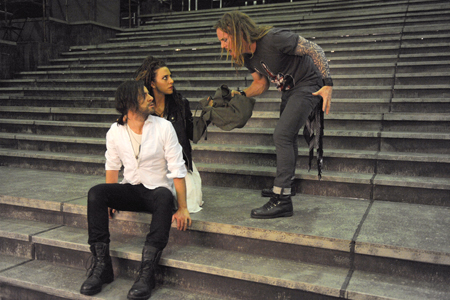 How was it working with Tim Minchin?
Amazing, he’s really famous in the UK and when I heard that he was playing Judas I thought what a genius piece of casting. When I met him it literally went to a new level of how much I admire him. He’s one of the most amazing people I have ever met, he is so intelligent and cool and different, he is really inspiring. He plays this part so well, Australia is going to be so shocked at how well he plays this role, because you think of him as a comedian, or someone who is just really funny but actually he is going to take you to places that you have never been theatrically.

And what about working with Mel C, where you a Spice Girls fan?
Everyone was a Spice Girls fan! Yeah, I definitely was, I was about 15 when the Spice Girls were out and I was definitely a Spice Girls fan. But Mel is just the most lovely and down to earth person, she is one of the biggest superstars in the world and she could be such a diva and walk into rehearsals and be like ‘i need this and I need that’ but she gets in there and has a really honest way about her and she is so down to earth. I adore her. we’re all friends really, I mean Tim was texting me at the airport yesterday and I was around at Melanie’s for lunch the other day, it’s a lovely team to work with, they’re so nice.

Any other roles you’d like to play in the future?
Oh god, loads, there’s one, I am a bit too young for it but I would love to be Jean Valjean from Les Mis, in five to ten years. I have always loved that musical. I would love to do Galileo, there are so many amazing male parts. But I suppose I am playing the most epic.

Have you always wanted to play Jesus?
Oh yeah I was like this crazy 12 year old crying in his room into my mirror trying to pretend I was Jesus. My mum was probably downstairs thinking ‘what is he doing? What have we created?’ But I have always been a fan of vocalists and real singing and i think this show possesses everything you require to be a great vocalist, it gives you so much of a chance to really show your voice off and a chance to give all that you can possibly give. That’s what I love about this show and Andrew’s work, he is such a genius.

Driver caught wanking on the M40