Isle of Wight: Climb a tree, stay in a yurt

Once upon a time, tree climbing was second nature: if there were branches within reach, their temptation was irresistible.

But, for most of us, those days are now in the misty past.

Personally, aside from the fact I now have trouble lifting my own body weight, I’d feel weird trying ?to shin up a tree in my local park.

So it’s with mild bewilderment I find myself dangling from one of the hefty branches of a 200-metre-tall, sturdy oak tree, harnessed and clinging on for dear life.

Wearing heavily rose-tinted glasses, I had remembered my tree-climbing years with fondness – and nostalgia spurred me into reliving that adventurous time.

Since childhood, however, things have become more complicated in the world of tree climbing: for a start, I’m wearing a helmet and there’s a safety talk before our group of four is allowed to begin.

We’re then taken to a huge field where several yellow-eyed goats watch us from among the wild flowers as we learn essential knot-tying skills. 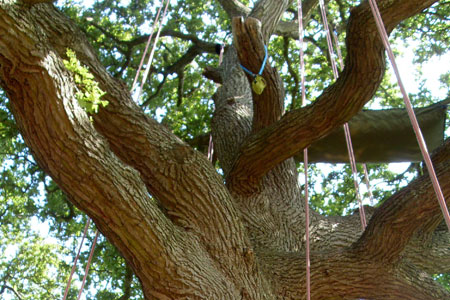 Soon it’s time to begin our climb. Strapped tightly into ?a harness (leave your vanity at the tree stump, as this is not ?a good look), we use a series of loops and knots to ascend.

Between branches, there’s a fair amount of swinging around by my friend and I as our hangovers kick in, causing the ground to spin beneath us.

We rest on the first branch and giggle: there’s something satisfyingly childish about perching in a tree for the first time in 20 years.

The only genuine child in the group, however, 10-year-old Rory, allows himself no such frivolities, and spiders his way higher up the tree in minutes.

Of course, as a kid you rarely get to the top, but under the guidance of New Zealander Paul McCathie (who set up the tree-climbing business GoodLeaf in 2005), it’s possible.

In the highest branches of the oak, a hammock has been strung – and lying back in it at the height of the ascent is incredible.

I look across the Isle of Wight to the ocean and, above, the cotton-wool clouds drift peacefully. The ground below now seems very dull, and I seriously contemplate not returning to Earth. 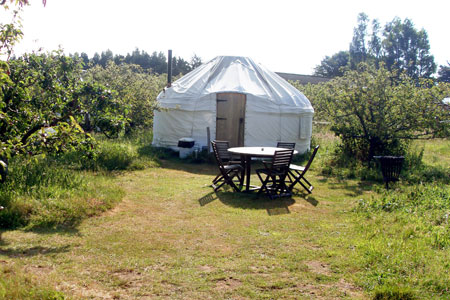 My food could be winched up to me, perhaps, or I might learn to catch insects.

I’m finally persuaded to abseil down by the sight of the group sitting idyllically on a picnic blanket eating Mrs McCathie’s homemade flapjacks.

I join them and ask McCathie if the trees like being climbed. “Yes,” he says. “I think they like the attention.”

He should know. McCathie has worked as an arborist for more than 10 years and is passionate about trees and their importance to the environment.

As we leave, he’s sitting on a picnic hamper, dwarfed by the huge oak. The yellow-eyed goats watch us suspiciously as we drive off.

That night we stay at Afton Farm in the middle of the island. The Really Green Holiday Company has five five-metre yurts interspersed throughout an apple orchard, each with its own picnic area.

The setting is stunning and the interior of these eco-friendly, fully furnished tents is equally impressive.

Curved wooden beams meet in the middle of the ?roof, creating a star over the roomy living area. There ?are a large double bed and a pull-out futon; cooking ?equipment stands on shelves; piles of cushions and ?blankets wait invitingly.

Later, sitting outside by the light of solar lanterns in the orchard, a wood-burning stove heating the yurt up for bedtime, we let the tree vibes work their magic.

I won’t leave it another 20 years.

Hire a car for £15 per day with rhinocarhire.com

Frankie Mullin stayed in a five-person Yurt at The Really Green Holiday Company which costs from £175 a yurt for four nights. Treeclimbing sessions can be booked with GoodLeaf from £35pp.