Grillo’s Five Star Movement is unlikely to win the election but seems likely to take over the Upper House of Italy’s Senate with a predicted 20% of the vote.

However, 64-year-old Grillo is barred from standing in parliament due to previous convictions for manslaughter.
“Honesty will be fashionable again,” he announced on Twitter.

Grillo has risen to popularity by attacking corruption in Italy and Europe’s elite and political classes. 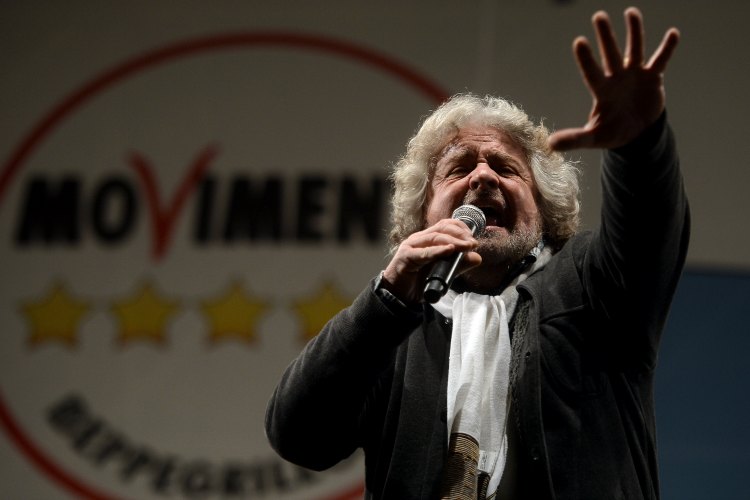 He has attracted huge crowds to political rallies, and angrily attacks leaders for corruption and the effects of the recession.

Grillo isn’t afraid to upset those in power and point the finger – he controversially called for priests to be allowed to have children “so they don’t touch other people’s.”

Grillo’s hugely popular blog – the headline banner of which shows the comedian offering a two-fingered ‘vaffanculo‘ (fuck off) salute – led to his political rise. He uses the blog to name and shame corrupt politicians and ruffle the feathers of the establishment, and also has a major following of close to 1 million on Twitter.

“It’s hard to think of any political party or politician who’s managed to secure such an influential position off the back of social media.” wrote Ian Steadman in Wired magazine.

David Weigel of Slate wrote “Today, the fate of the world economy rests with an Italian stand-up comedian.”

“Italy has turned its back on its political class and a new language of community, identity and honesty is filling the gap,” Grillo told The Observer.

Why the reverse London commute is a growing trend