Italy flogging means nothing if Wallabies don’t back it up in Ireland, says Cummins

Australia have won just three Tests of the nine helmed by coach Ewen McKenzie, with victories over only Argentina and Italy.

“We need to get some wins on the board and these next few games aren’t going to be easy,” said the wildcat winger known as the Honey Badger.

“While it was a good performance, we need to get some wins on the board and these next few games aren’t going to be easy at all,” he said of the Wallabies’ upcoming clashes with Ireland, Scotland and Wales.

“You don’t count your chickens before they hatch. Everyone has to pull tight together and focus on these next few weeks because these sides are going to be tough.” 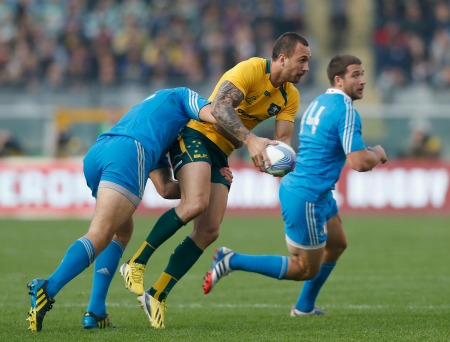 Australia got the autumn tour off to a losing start against England, before taking down Italy 50-20 in Turin.

They face Ireland at 5.45pm on Saturday (BB2), then Scotland and Wales the following weekend.

Cummins wrapped the Aussie halves pairing, in particular Quade Cooper who was on fire in Turin and had a hand in most tries.

“[Cooper] confused some of their blokes, some of our blokes and definitely me,” Cummins said.

“They had a huge game tonight, you could tell the Italian blokes were very frustrated that they weren’t getting that over us,” Mowen said.

Video: Eight minutes of people falling over on an icy pavement