It’s all over! England fall to 5-0 Ashes series defeat on day three of the final Test in Sydney

It took just 32 overs for the tourists to be dismantled, with four of their wickets disintegrating in 11 balls and Mitchell Johnson adding three more scalps to his tally for a series of 37.

Ryan Harris took his turn to take the lion’s share, finishing the innings with 5-25.

Not one England batsman topped 50 runs in the innings, with Michael Carberry going closest with 43 and Stuart Broad not far behind on 42 – the series will be marked by the failure of any of them to build more than 300 runs 10 innings (those who survived the distance).

Before a ball was bowled in the five-Test series England were favourites having won the previous three Ashes battles, but this one was a totally dismal mismatch and just the third clean sweep in more than a century of the famous rivalry.

This SCG Test started well for Alastair Cook’s side when he won the toss for the first time and chose to send Australia in to bat on a green top. It seemed a wise decision but within a couple of days they were set an unrealistic total of 448 runs for victory. 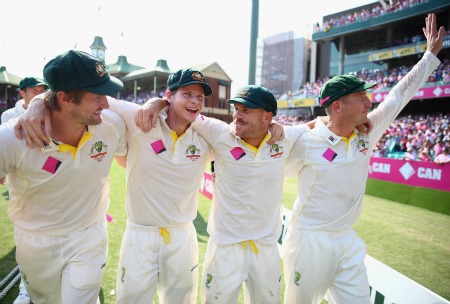 England handed out three Test debuts in the final match of the series which had previously seen loses of 381 runs, 218 runs, 150 runs and eight wickets but new blood didn’t bring anything new for the scorers.

For a draw England would have had to bat for more than two days and stand up in a way they hadn’t gone close to all series – instead it took less than three hours for them to roll over.

After a hit and giggle in the morning session, Chris Rogers compiled another excellent century while his partners came and went looking to push the pace.

In the chase, Cook was the first to fall for 7, caught behind off Johnson, before Ryan Harris knocked over England’s saviour of the series in England, Ian Bell (16) when he guided a cut into the safe hands of David Warner.

Kevin Pietersen failed again with just six courtesy of a stellar George Bailey catch at silly mid-on off Harris’s bowling and England were 3-57 at tea.

Any notion that a cuppa could solve any problem for the English was quashed after the break as the capitulation was completed. 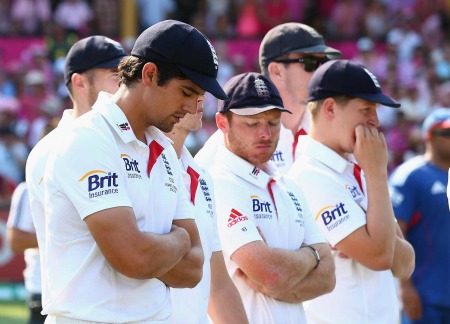 Carberry went top-edging Johnson before one of the debutants, Gary Ballance, was done LBW by Johnson, the destroyer who’d earlier posted images of himself with a pink moustache in honour of Jane McGrath day which saw the whole of the SCG in pink.

Nathan Lyon continued his fine, understated series with the wickets of keeper Jonny Bairstow for nought and they were into the bowlers.

Debutant leg-spinner Scott Borthwick, who snagged three wickets when the Aussies were giving them away in the morning session, returned the favour edging to Michael Clarke off Lyon to put England at a hardly defiant 7-95.

As has been the case throughout the five Tests, all-rounders Ben Stokes (32) and Stuart Broad (42) refused to go down without swinging – but the paper bag they were fighting out of was drenched and after some noble slogging they were back working out what to do with two extra days of sunshine.

Rogers’ earlier century was his second of the series and took him ahead of opening partner Warner as the series’ top run-scorer. 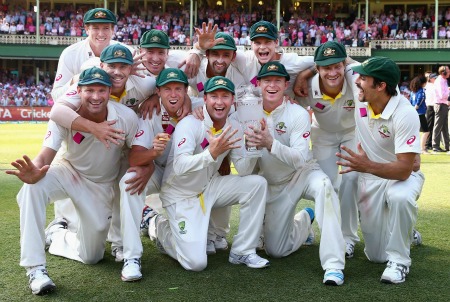 England’s tormentor Brad Haddin for 28, but not before breaking a host of records for keeper-batsmen that don’t do justice to his timely contributions that were as important as Johnson’s thunderbolts.

Australia’s dominance with the bat was underlined by the fact the hosts had six of the top scorers in the series on average and 10 centuries scored to England’s one.

Harris’s 22 wickets at an average of 19 would look impressive were it not for Johnson’s Man of the series effort of 37 at 13.9.

England are now reeling, with the places of senior figures not dropped or retired from the series coming into question and some youngsters left to pick up the pieces under a whimpering skipper as out of form as any of them.

History will record the series as an irresistible 5-0 win to Australia, but it was even worse than that for England.

Go to a Hen Night and hook up with Ashley Cole