Jig on over: top Irish festivals

Not only is Galway rich in historical, scenic and cultural attractions in its own right, it is also the setting of choice for some of Europe’s most inspiring and surprising festivals. It’s a city with a constant buzz of excitement.

Festivals (fleadhanna) are a Galway speciality. There is something about the famously warm Irish welcome, the non-stop craic and the idyllic scenery that makes Galway the setting of choice for countless cultural, religious and sporting enthusiasts with interests ranging from Oscar Wilde to Oysters and from St Patrick to Father Ted. Here are five of the bigger ones to whet your appetite and to give you a flavour of what Galway has to offer, but there are plenty more to choose from.

The Galway film festival is a long-standing fixture in the European movie industry’s calendar. 2015 will see the 27th staging of an event that allows film goers to mingle with film makers in celebration of all things cinematic. The festival will run between 7th and 12th July. For details check out galwayfilmfleadh.com

One of the most prestigious events in all of Europe, the Galway International Arts Festival (July 13th-26th) celebrates all things dramatic and visual. It is a spectacularly colourful meeting of creative minds and is the spur for a host of fringe events, including the Galway Fringe Festival which focusses more on the work of local artists. 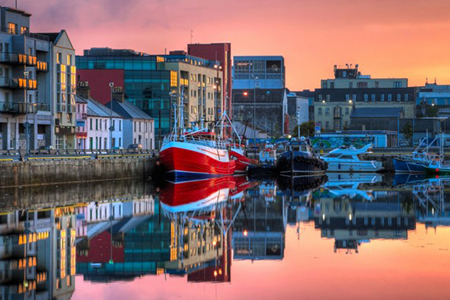 Last year saw the first ever Full Tilt Galway Poker Festival, which attracted some of the sport’s leading proponents as well as thousands of happy card players. The largest event of its kind anywhere in Europe coincided with the arts festival and a horse race meeting to ensure that whatever went down on the tables, everyone went home a winner. No wonder it was named European Poker event of the year.

As if Galway wasn’t fun enough, the famous comedy festival is getting bigger and better every year. Since its humble beginnings in 2005 it has grown to become one of the must-see events of the comedy calendar. Sponsorship by Vodafone and the presence of a regular host of TV stars make this a guaranteed five star event. Check out vodafonecomedycarnival.com for the dates and details of the 2015 line up.

Galway is the setting for a range of music events for all tastes, throughout the year. These range from the Clifden Traditional Irish Music Festival and the FleadhnagCuach (Cuckoo Festival) celebration of early Irish music in the spring to the more contemporary Currafest in July, as well as August’s Sugar Beat. It is in the nature of Galway itself that these are all marvellously mixed and welcoming occasions. Just like the city as a whole, there is invariably something for everyone.

It is difficult to put your finger on what exactly makes Galway such a perfect stage for these events, and literally hundreds of others – some big, some small. But that little touch of mystery may be part of the magic. A full list of Galway’s main events for 2015 can be found at galwaytourism.ie/pgalway-events-calendar.html.

Teaching – Taking it day by day

Met commissioner: A new era of “disorder” on our streets