A monster tornado in Joplin, Missouri, the biggest since 1947, has left at least 116 people dead. Shocking new pictures and video have emerged showing the tornado’s devastation of the US town.

Joplin’s tornado death toll is expected to rise as emergency workers pick through the rubble of destroyed buildings.

Local emergency management director Keith Stammer told the Sun: “People are just telling us where they have seen bodies and adding them up in their heads. We have to go through every building, every house. It’s going to take a long time.” 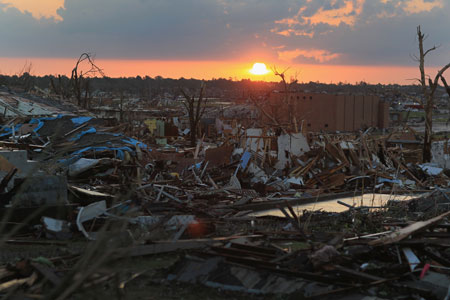 Joplin residents had only minutes to find shelter before the tornado, with winds up to 198 mph, bore down on them.

In this amateur video, a family can be heard bracing themsleves for the tornado to strike as they shelter in the back of the shop. When the tornado hits halfway through the video – smashing the glass from teh front of the building – the sound is deafening.

Rescue crews have been sifting through shattered houses and crushed vehicles to reach survivors. The massive tornado flattened the Joplin high school, slammed into the hospital and left a trail of felled powerlines, shredded trees and gas leaks from broken pipes in its wake.

In this video the sheer force of the tornado can be seen.

Fire chief Mitch Randles – whose home was razed said: “The tornado cut the city in half.”

Joplin High School principal Kerry Sachetta said: “You see pictures of World War II, the devastation and all that with the bombing. That’s really what it looked like. “I couldn’t even make out the side of the building. It was total devastation in my view. I just couldn’t believe what I saw.”

Below is aerial footage of Joplin in the wake of the tornado, shot from a chopper.

Governor Nixon declared a state of emergency while President Obama, currently on a state visit to the UK, offered residents his condolences and said the Federal Emergency Management Agency (FEMA) would be working closely with state and local agencies to assist emergency workers. 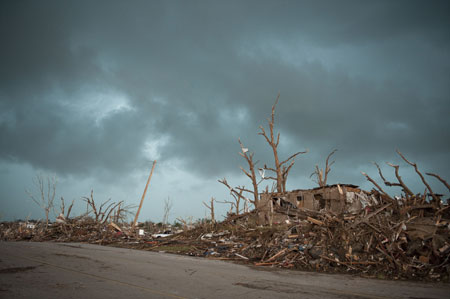 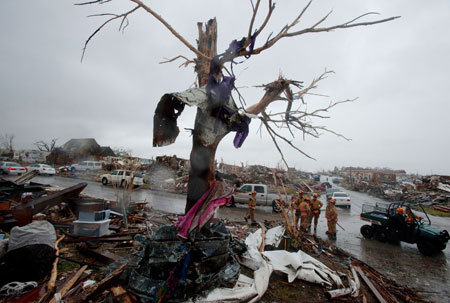 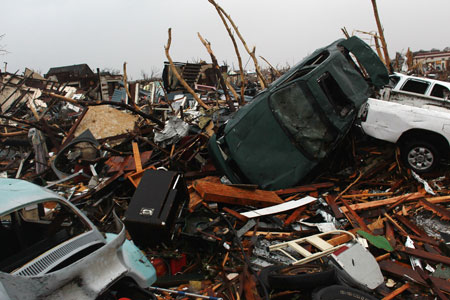 UK hotter than the Mediterranean as temperatures soar