The 18-year-old singer has penned a track for his forthcoming record Believe which reveals his feelings about Mariah Yeater, a fan who claimed last year that he was the dad of her son, Tristyn, before she dropped a paternity case against him and confessed her ex-boyfriend was the child’s real dad.

Justin – who always vehemently denied her accusations – said: “There’s a song about that girl that said she was going to have my baby, Mariah Yeater.

The teen pop sensation – who is a Christian – has described his new album is “like a mix between Fergie [singer from the Black Eyed Peas, we assume, not Sir Alex] and Jesus.”

Justin – who has been dating singer-and-actress Selena Gomez for more than a year – recently took to Twitter to direct a tweet at Yeater, on which he attached a video clip of Sacha Baron Cohen’s Borat character constantly saying: “You will never get this.” 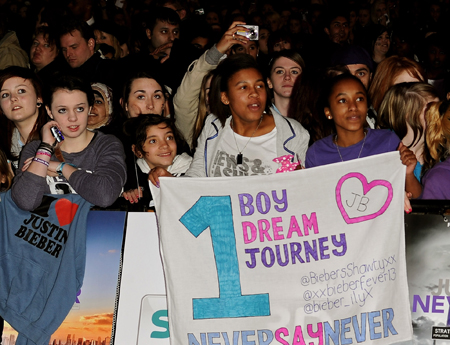 He wrote: “Dear mariah yeeter … we have never met … so from the heart i just wanted to say… [sic)]”.

The Never Say Never singer had previously agreed to take a paternity test in an attempt to rubbish her claims and also insisted he had never met her.

Darwin: Around the town

Edan and Paten Locke to headline in Blackpool

What’s going on this month?

Elephants caught in -40C temperature saved after being fed vodka