“As of today asylum seekers who come here by boat without a visa will never be settled in Australia,” said Rudd.

“I understand this is a very hard-line decision,” said the PM who recently displaced Julia Gillard as leader of the Labor party in the run up to the general election Down Under.

“Australians have had enough of seeing people drowning in the waters to our north. Our country has had enough of people smugglers exploiting asylum seekers and seeing them to drown on the high seas.”

The announcement to send all refugees arriving by boat to Papua New Guinea is a major overhaul to asylum policy, a key vote-winning political issue, in the run up to the election.

Refugees will be sent to a processing centre on Manus island which will hold up to 3,000 people at a time.

According to the BBC, the majority of the refugees arrive from Afghanistan, Iraq, Iran, and Sri Lanka. 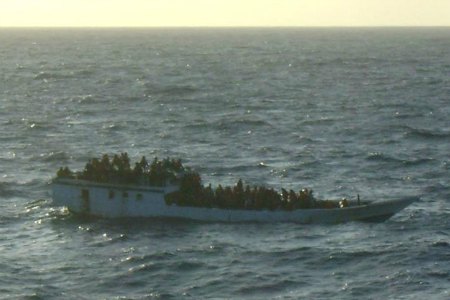 “The new arrangements will allow Australia to help more people who are genuinely in need and help prevent people smugglers from abusing our system,” explained Rudd.

“Who would have thought a prime minister who said that under Julia Gillard the country would lurch to the right on asylum seekers would…lurch so far to the right that he has leap-frogged Tony Abbott in terms of cruelty and just how far he’s prepared to go with the treatment of people who are seeking asylum in our country?”

“It’s a day of shame for our nation and it says to the rest of the world Australia is a very rich country prepared to pass the buck to a very poor country.”

Labor senator Glenn Sterle recently suggested to The Australian that Rudd, post-ballot, would likely make a tough move on the issue of asylum-seekers.

“Kevin said to me he will not be taking a lurch to the Left. He understands that it is a major issue in Western Australia and in western Sydney.”

A Lion in the Meadow author Margaret Mahy dies in Christchurch, aged 76

Adele beats Britney and Radiohead in the charts