Kisses amongst the violence: Lawless director John Hillcoat on his new gangster-western film

Australian filmmaker John Hillcoat has, in the space of five directorial offerings, become known as a purveyor of vivid, visceral yet emotionally honest movies.

The Proposition and The Road were both heartfelt but unmistakably brutal, and his latest offering, 1920s-set outlaw thriller Lawless, is no exception.

However, it was not the violence of Lawless that attracted Hillcoat, but the chance to make a film in one of his favourite genres.

“The appeal was wanting to do a gangster film,” the 51-year-old Queenslander says. “I love gangster films and Westerns, but the problem with those genres is keeping it fresh.

But then coming across this book, it felt it was a Western that became a gangster and I realised, historically, it was almost the tail end of the west and the birth of the gangster period, so that attracted me, too.”

The book in question is 2008’s The Wettest County In The World, a part-fictionalised tale of the notorious US trio of Bondurant Brothers, written by their grandson Matt Bondurant.

The siblings were purveyors of an in-demand moonshine in Depression-era Franklin County, Virginia. 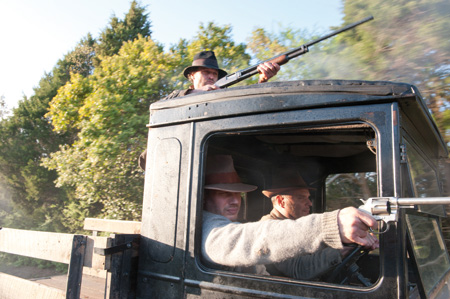 They were a hard bunch who found their business under threat with the arrival of Chicago mobster Floyd Banner (a sparingly used Gary Oldman – “it’s best to leave you wanting more,” Hillcoat says) and brutal Chicago lawman Charlie Rakes (an almost unrecognisable Guy Pearce who’s “usually so invisible, but here brings a James Cagney-type energy”), sent to quash the brothers by any means necessary.

Hillcoat cast Shia LeBouf as the youngest, physically weakest yet intelligent and highly ambitious brother, Jack; Tom Hardy as Forrest, the bruising, protective yet maternal middle son, “a wound-up force of nature, lethal like a snake”; and Jason Clarke as eldest Howard, a disturbed war veteran.

“We felt because Forrest was the matriach and the patriach of this family, we should make him the oldest,” Hillcoat says. “But in those days, it was tradition for the eldest to be given the respect, and Jason Clarke made a compelling case to restore their ages to how they were in the book, with Howard as the oldest. He was absolutely right.

“You have the older brother with his war memories he’s not been able to deal with, he drinks a lot and is unreliable. He hasn’t got the control whereas Forrest has got too much because he was left with the family when his brother was overseas. It made it more dynamic.”

Upsetting the expected dynamic was something Hillcoat and screenwriter Nick Cave (in his third collaboration with the director) gunned for from the start. 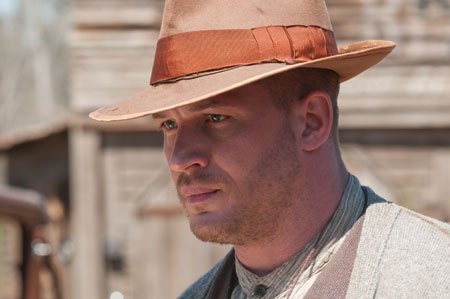 “Traditionally in gangster films, these characters go out in a blaze of bullets, we go on the adventure, and we feel good that they’re punished for their sins,” he says. “We wanted to subvert that.”

Indeed, the film is full of contradictions, both in terms of genre expectations and for Hillcoat aficionados.

The Australian’s films aren’t known for their female characters: The Road was a post-apocalyptic father-and-son tale and The Proposition was an Aussie western centred around a band of outlaw brothers.

”What me and Nick loved here were the things that turned the genre on its head, one being the female characters,” he reveals.

“In gangster films, they’re usually the throwaway molls that hardly get a look in. In this story, the strongest person is Maggie [Jessica Chastain].”

Mysterious big city girl Maggie is stronger than the awkward Forrest and ends up taking over part of his role in the family.

“He doesn’t know how to deal with women, especially strong women, and she ends up protecting the whole family and bearing harder truths than they do,” Hillcoat explains.

“We loved that the brothers start believing their own legend but that she sees right through it.” 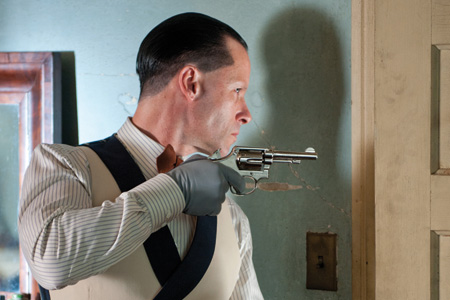 Mia Wasikowska’s Bertha, an Amish girl who catches Jack’s eye, is another female to have an impact, albeit of a different kind. “The innocence and sweetness of their first love was a great contrast to the brutality and complexity of the mature Forrest and Maggie relationship,” he says.

Humour, too, is a new addition to the Hillcoat canon. Anyone who’s seen The Road will know respite of any kind was in short supply. However, Lawless’s tonal complexity gave Hillcoat the opportunity to branch out.

“Despite the public perception of Nick, he has one of the best senses of humour of anyone I have ever come across, and Tom was very audacious in trying to tease out more humour to Forrest.” One scene, in which a dose of harsh realism is dealt to him by Maggie, is particularly memorable, for his monosyllabic shrugging and grunting response.

This is a Hillcoat film, though, and the lighter moments are counterbalanced with sporadic but exceptionally harsh violence. The Bondurants mete out a furious punishment on urchins intent on harming them or their business, and Guy Pearce’s Rakes is especially nasty. Hillcoat remains unapologetic, citing a responsibility to portray life as it is. 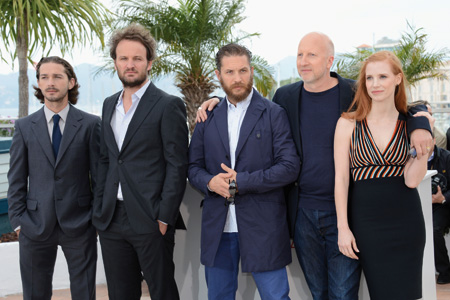 “I prefer to make violence the disturbing, scary thing it is,” he says. “To see the physical toll, whether it’s a bullet, knife or a fist, and then the emotional aftermath. For me the key is to make it very messy and chaotic.”

With Lawless, Hillcoat is hoping for a smoother route to the screen, after the infamous wrangling that saw The Road sit idle on the studio shelf as the suits pondered how to sell an end-of-the-world tale lacking CGI-spectacle.

“I am always anxious at this stage. I am very happy with the film, but the marketing campaign can be unpredictable. I have had a rocky road with my past work on that front,” he reveals, seemingly unaware of the pun.

While Lawless is sure to find deserved commercial and critical success, it seems to have left an impression on Hillcoat that may shape his future work.

“Nick and I are now looking for a story that has a female lead – we’ve had our fill of alpha males!” Prisoner Cell Block H, may we suggest?

Lawless is out September 7 through Momentum Pictures