Barcelona’s diminutive talisman Lionel Messi was confined to the bench, and forced to watch his beloved team flounder without his dynamic presence.

The tie looked to be over at halftime after Barca failed to create a single meaningful chance in the first 45 minutes, and three minutes into the second half Arjen Robben put the tie beyond doubt, cutting in from the right and curling a beautiful shot into the side netting.

Barcelona were left needing six when they hadn’t looked like getting one.

For many before the match this was a pride-saving exercise for Barca, and the Catalan giants’ pride seemed exhausted as Bayern cut them apart at will at the second half wore on.

Gerrard Pique, one of Barca’s better performers on the night, was unlucky to shin a Franck Ribery cross into his own net, before a towering header from the irrepressible Thomas Müller completed the rout.

The 7-0 aggregate scoreline was the biggest two leg defeat in Champions League history.

The result will be all the more difficult to bare for fans of Barcelona whose beloved former coach Pep Guardiola will take up a role coaching the German champions next season.

While in the previous semi final Real Madrid managed to at least give Borussia Dortmund a scare, netting two goals in the dying minutes, Barcelona rarely threatened the Bayern goal.

Munich’s emphatic victory sets up an all-German final at Wembley, to add to the all-English, all-Italian and all-Spanish finals that have happened since 2000.

Bayern will go into the final as favourites having defeated Dortmund in their last encounter in the Bundesliga 1-0.

However much of the football chatter today will no doubt be speculating as the future of Barcelona: Are the team who’ve brought us some of the most mesmerising football ever on the slide? 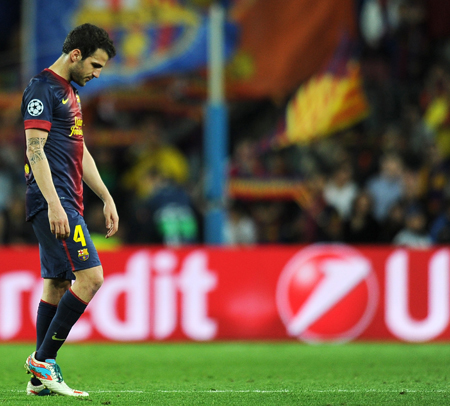 Bayern dramatically exposed their apparent lack of strength in depth, and in particular the questionable defensive qualities of their two attacking wing-backs Dani Alves and Jordi Alba.

Barcelona coach Tito Vilanova, who was this year treated for cancer of the saliva gland, said his team “do not need a lot of changes”.

“Every squad needs to be changed to some degree, but we have a good squad,” Vilanova said. “We don’t need a lot of changes.”

Gerrard Pique said: “We have to make some decisions in the summer. We are not the best any more. Other teams are. Perhaps we need to work harder. That was hard out there – a bitterly disappointing night.”

On a clear day you can see forever