It’s late on my final night in Austin and I know I should go back to my hotel. For once, I think, it would be nice to get on a plane without a hangover. But this is not to be. East Austin’s dive bars are far too beguiling for that.

This once-Hispanic neighbourhood of small, one-storey buildings is now one of Austin’s hippest enclaves; eclectic, sometimes-shabby bars, cafes, restaurants and food trailers line a street that is, by day, a laid-back place to drink a coffee and, by night, a music-filled playground.

In the no-frills live music bar Hotel Vegas, I watch post-punk band Crooked Bangs, the female frontwoman all tousled hair, tattoos and eyes rolling back in her head. They’re followed onto the tiny stage by Los Vigilantes, whose beer-spitting, cape-wearing energy turns the front of the crowd into a stumbling mosh pit. 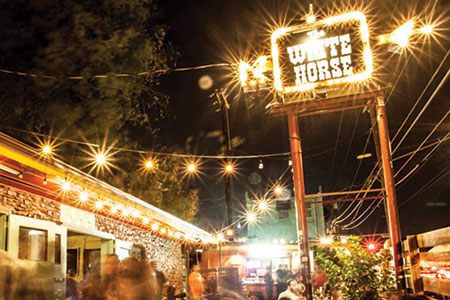 Down the road, in the brilliantly named Cheer Up Charlies – which with its pastel, rainbow-painted exterior, looks like a childrens’ nursery where your kids just might be fed acid – electro act Brute Force play an ear-splitting set while outside, under a parachute strung with coloured lights, people sit and drink beers.

I leave and follow my ears around the corner to the cavernous White Horse, packed with folk of all ages, many in rockabilly ensemble, dancing or boozing to Americana band The Bellfuries.

It is music, of course – diverse, varying wildly in quality but always on offer – on which Austin has built its reputation, exemplified by the epic annual South By Southwest music festival in April, at which upwards of 2000 acts play at venues across the city.

“Live music capital of the world” is one of Austin’s self-awarded tag lines (the other is “Keep Austin Weird”) and, after a few days here, rarely finding myself more than a stone’s throw from live music in some form or other, I’ll go with that. 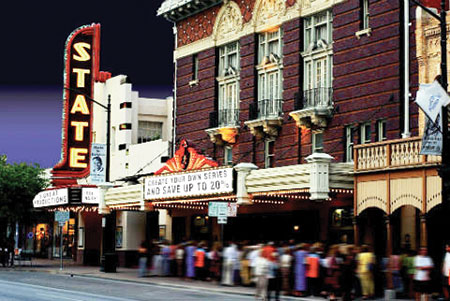 Austin is small (population about 820,000) and it’s easy to find your niche. Further along 6th Street, on the other side of a freeway flyover, Magaluf-esque student madness reigns: girls dancing with glow sticks, bucking broncos and commercial dance music entice (or otherwise) patrons into shoulder-to-shoulder venues and people spill out of the bars onto the street.

In Austin’s centre, the beautiful, historic Paramount Theatre is definitely worth a visit and I spend one night listening to the exquisite Kat Edmonson, a critically acclaimed jazz singer who launched her career here in this very city.

He is understandably proud of the venue and, with his lifetime career in rock’n’roll (that he once drove Slash down the central reservation of a motorway on the way to a Guns N’ Roses concert seals it for me), he should know. A constant roster of big name bands play ACL (from Al Green to Jay-Z), but up-and-coming acts are also given a platform and at any given gig you might just be hearing the next big thing. 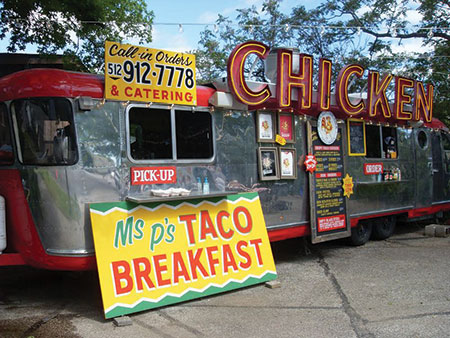 Music may be Austin’s first love, but it’s not the only reason to visit. Amazing street food, quirky shops and characterful neighbourhoods are among the other earthly delights this city offers and it’s the city’s enthusiasm for small, independent businesses on which the ‘Keep Austin Weird’ slogan is based.

A good place to begin your tour of general left-of-centre-ness is South Congress (or SoCo as the natives call it). Like East Austin, SoCo attracts a hip, creative crowd and the bars, food trucks and stores are suitably eclectic.

Don’t miss the incredible Heritage Boots, which sells handmade cowboy boots in a dizzying array of designs. Nearby, antique emporium Uncommon Objects sells everything from Indian arrows to lamps made of armadillos, while South Congress Books has a rare, browse-worthy collection. 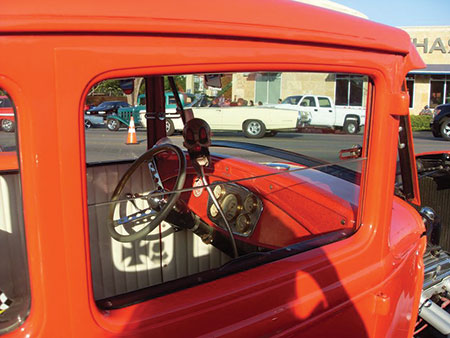 The week I visit Austin, the Annual Lonestar Round Up is taking place and spectacularly vamped-up vintage hot rod cars congregate in SoCo. The event is a window into the melting pot that is Austin, attracting a mixture of Texas country folk, hip residents, older Austinites and tourists from across the globe.

I check out the cars and drink tequila with Beth, a braces-trousered, shaven-headed California native, now settled in Austin. We get hungry and wander down Congress to a collection of food trucks parked beneath a patch of trees.

Over the past few years, the food truck scene in Austin has exploded and pretty much every neighbourhood has a collection of brilliantly scenic trailers and trucks that serve diverse menus.

By night, East Austin’s food truck parks, with their fairy lights, picnic tables and potted plants, resemble mini fairgrounds in which you can chow down on creole stews, Mexican tacos, vegan health food, burgers, sandwiches, Thai food and even fish and chips. 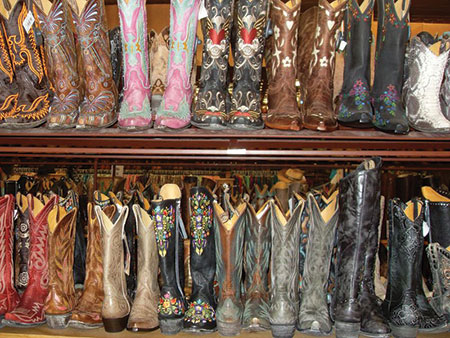 Here in SoCo, Beth and I sit in the sunshine outside Indian streetfood seller Nomad Dosa, a gleaming silver Airstream trailer from which drifts heavenly smells of spices. I eat one of their veggie dosas and it’s delicious. “As with life, so with food trucks,” Beth says. “There are so many damn choices but, if possible, try everything once.”

In this spirit, we work our way through several more bars, a couple more food trucks and a coffee shop before jumping in a taxi out to brewery Hops and Grain, at the far end of 6th Street. Outside the industrial-looking building (only open to the public on Fridays from 2pm to 6pm and Saturdays from 12pm to 4pm), casual Austinites mingle and drink pints. We grab beers and join in a tour.

Hops and Grain’s tag line, ‘Environment, Community, Craft’ is not a marketing gimmick, owner Josh Hare tells us, and it seems he puts his money where his mouth is. The substantial grain waste that is a by-product of brewing is used to make dog food (it’s full of fibre and protein), employees are paid more if they use environmentally friendly transport and a percentage of the company’s annual profits go to green projects.

Righteousness aside, however, the small but tasty selection of beers keep us going until we decide our livers and stomachs need a break. Heading back down 6th, we duck into the Twenties-themed Ritz theatre to catch a screening of the original Evil Dead. 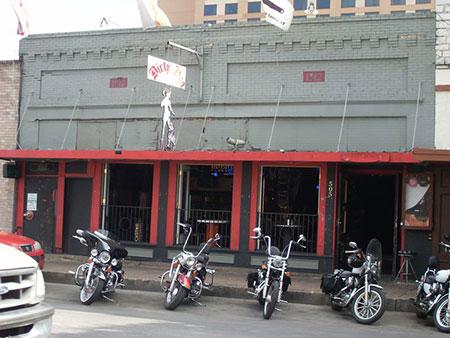 Unfortunately for our livers, the Ritz’s screening room is called the Alamo Drafthouse Cinema, an inspired venture that combines movie-watching with food and drink, provided by in-theatre waitresses. I surrender and drink margaritas throughout.

Stepping out of the Ritz, I am struck again by Austin’s distinctly village vibe – even the city’s busiest streets have a small town feel to them. Perhaps it’s the grackles, glistening blue birds whose crazy whizzing whistles follow you from the tops of trees across the city. “People in Austin hate them,” Beth tells me.

Grackles may be out of favour with the locals but the city’s other distinctive flying colony – the bats – are beloved and, every dusk, a crowd gathers on the Congress Avenue Bridge to await their appearance. Spanning the Colorado River – on which you can canoe, kayak and, further upstream in a hot spring, swim – this is a scenic place to take in the city. And when the bats arrive in a great cloud from under the bridge, it’s impossible not to be charmed by Austin’s country-city combo magic.

So, on my last evening, it’s far later than planned when I drag myself home. Yes, I’ll be cursing myself as I throw things in my suitcase tomorrow morning. Yes, I’ll have tinnitus for days. But Austin is completely, utterly worth it.

Frankie Mullin travelled to Texas courtesy of American Airlines and stayed at the W Austin hotel. 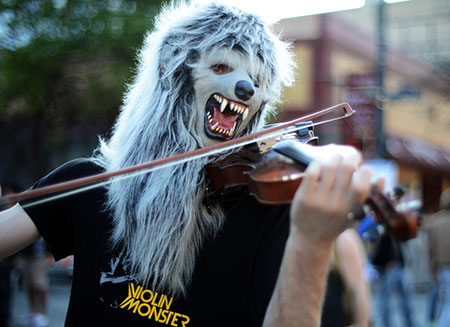 When to go: September to November and March to May, when temperatures are cooler than the scorching summer months.

Accommodation: The Firehouse Hostel has rooms from £18.50pppn and is centrally located. Includes free breakfast, free coffee and tea and free wi-fi.

The W is adjacent to the ACL music venue and is definitely worth splashing out on to give yourself a treat. Rooms from £166pn.

Getting there: Fly from London Heathrow to Austin from £810 return with American Airlines.