Legendary Londonderry: Why this Northern Irish destination is one of the top cities in the world to visit in 2013

If there’s one city really set to feel the spotlight this year, it’s Londonderry.

This Northern Irish destination is packed with sights, arts, history and more, yet for a long time no one’s been paying it much attention.

A reputation as a battleground during the Troubles unsurprisingly put tourists off, but the city is the UK’s City of Culture for 2013, and Lonely Planet has also been singing its praises, calling it the fourth best city in the whole world to visit this year. Let’s have a look at why … 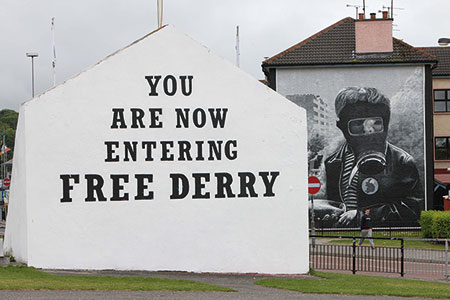 The name: Derry or Londonderry?

Let’s get this part out of the way first: the city’s name is still very contentious.

Most Irish nationalists prefer to use the name Derry, while unionists use Londonderry.

Legally, the city and county are called Londonderry (the local government district is called Derry), but you’ll still see the ‘London’ part of the name scrawled out on road signs. Want to avoid the debate altogether?

The history: a raw conflict

The conflict between the mainly Protestant unionist community and mainly Catholic nationalist community was over what constitutional status Northern Ireland has in relation to the United Kingdom.

Much of the Troubles, as the conflict is known, was focused here along with the capital, Belfast, and during the early Seventies the city was heavily militarised.

From the city’s landmarks to artworks, today reminders of the violent years are everywhere. 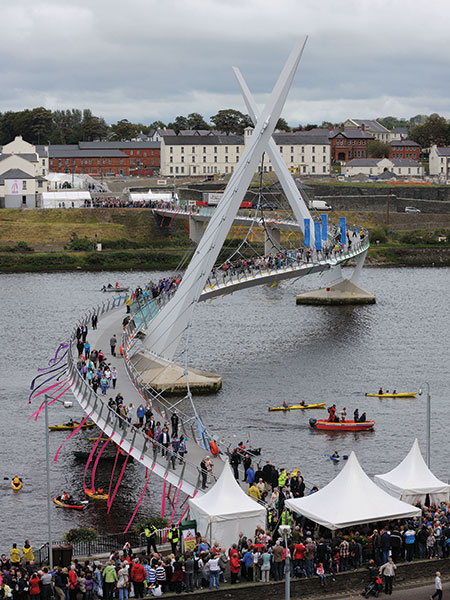 The landmarks: bridges and walls

Opened in June 2011, the Peace Bridge is a sweeping structure that crosses the River Foyle, and links the largely unionist east of the city to the largely nationalist west – the intention being to symbolise peace between the communities, as well as link them practically.

It’s a spine-tingling sight by night, when the bridge is illuminated in purple, blue and green.

Londonderry is also famous for its 1.5km of medieval walls, which surround the city and were designed to keep the English and Scottish out.

They’re still intact and you can make a complete circuit of them, making a stop to check out the 24 huge restored cannons, and four original gates along the way. 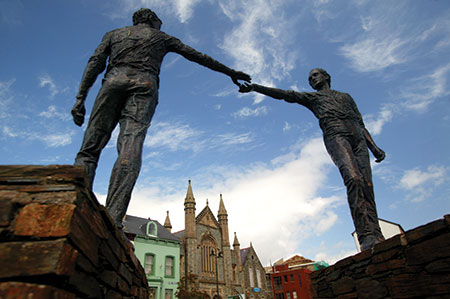 A moving series of murals depicting the violence of Northern Ireland’s Troubles can be seen on Rossville Street in the Bogside neighbourhood.

The murals, called the People’s Gallery, show images of the 1981 hunger strikes, a petrol bomber and commemorate the victims of Bloody Sunday, among other pictures.

A similarly poignant work is the Hands Across The Divide statue on the west side of the Craigavon Bridge.

The iconic bronze sculpture of two men reaching out to each other was unveiled in 1992, 20 years after Bloody Sunday, when unarmed civil rights protesters were shot by British Army soldiers. 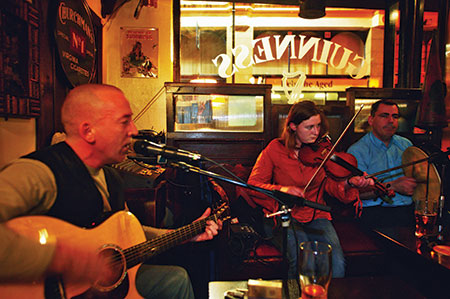 The craic: folk music and drinking

Heart-warming stuff, even more so after an Irish whiskey or three.

Paedar O’Donnell’s Bar is said to be one of the best for catching a session (peadars-gweedorebar.com).

The events: festivals, pageants and all that jazz

There’s a whole programme of events planned for 2013, so make sure your trip coincides with one of them to see the city at its liveliest.

There’s a jazz fest in May, a huge parade called The Return of Colmcille takes place in June and a 10-day All Ireland Fleadh celebrating all things Irish will kick off in August. It’s certainly going to be a busy year. 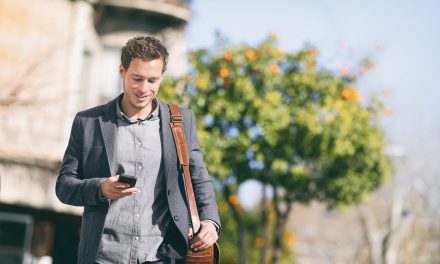 How to Get a Work Visa for Spain