Nat Geo WILD today unveiled the first ever hyper-realistic animatronic leopard, which has been created to raise awareness around serious threats to the species, as the channel launches its seventh annual Big Cat Week, in association with charity the Big Cats Initiative.

The lone leopard, created by leading animatronics designers John Nolan Studio, has been seen roaming urban landscapes, rummaging through bins and gnawing on carcasses at night, giving Londoners the shock of their lives in locations including Brick Lane, Chinatown and Mudchute Farm.

Created over two months by the team behind some of Hollywood’s most impressive animatronics including the Harry Potter films and the BBC’s recent Spy in the Wild, the first ever fully animatronic leopard is being used to raise awareness about serious threats to the habitats of big cats, as leopards are faced with up to 90% habitat loss, resulting in regular human-cat conflict.

Wildlife Photographer of the Year winner Sam Hobson, from Bristol, has been following the lifelike animatronic around the city, capturing stunning images that highlight the plight of the species in cities like Mumbai, where habitat loss is forcing leopard and man to coexist with dangerous consequences. 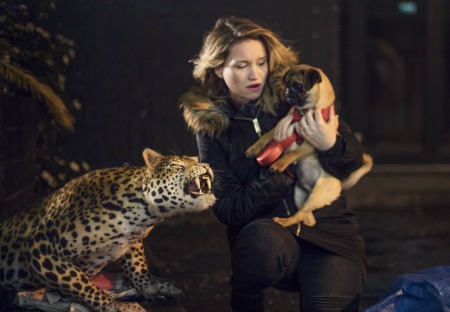 Hobson said: “I am used to photographing urban wildlife in the UK, from foxes to badgers, but it has been a fascinating and thought-provoking challenge bringing the plight of the leopard to London. It’s hard to comprehend that in India’s busiest city hundreds of leopards are literally roaming the streets at night, resulting in shocking conflicts. I hope that my images and the many people that encounter the leopard will raise awareness of this serious issue asking if it was on our own doorstep would we do more to prevent it.”

The stunt has been inspired by the Big Cat Week episode Mission Critical: Leopards at the Door, which airs on Nat Geo WILD on Thursday 9th March at 8pm. The episode features photographer Steve Winter and British cameraman Bertie Gregory as they follow the deadly predator at night in Mumbai. Hobson consulted both Winter and Gregory to prepare for his London shoot and his poignant images evoke Winter’s work.

Cricket: Black Caps skittled out for 45 in first test against South Africa