Let’s get naked! We dare to bare on nudist beaches in Sopelana, Spain

Free yourself from the fetters of fashion and get an all-over tan ?on a nudist beach – you'll also save on airline luggage costs. Words by Janine Kelso.

Strolling along a mountain path to a beach, my boyfriend and I are faced with an eye-popping scene.

“Everyone's naked!“ I shriek, as I cop an eyeful of exposed bottoms and bosoms baking in the sun. “So they are, “smiles my boyfriend, spying a trio of raven-haired twenty-something girls slathering sun cream on to their nude bods.

So, what to do? The shining waves are surf-perfect, the sand soft and silky, the vibe is chilled and there's no chance of bumping into our neighbours. But as naturist novices, do we dare do the Full Monty?

I'd never fancied a 'nakation' and if we hadn't stumbled across Barinatxe nudist beach, in Sopelana, while on a surf safari of Spain's rugged northern coast, I never would have sought one out. After all, aren't nudist beaches full of wrinkly grannies and gawping perverts?

I'd always imagined them to be packed with a throng of people I wouldn't want to see naked. But, while there are ?a few oldies here, there are plenty of buff young dudes and pretty girls, too.

We find a secluded spot on the grass by the cliffs and quickly shed our clothes. Like removing a plaster, ?I decide that it'll be a lot less painful if I peel off my bikini ?as fast as possible.

I arrange my towel carefully to minimise the chance of sand getting where it shouldn't and start applying suncream, wishing I'd brought another bottle: I'm going to need more than I was expecting. At least it will be a good opportunity to toast those lily-white bits that never see daylight.

Peaceful Barinatxe beach, untouched by mass tourism and sheltered by craggy cliffs, is a 752-metre-long dreamscape, frequented mostly by locals – as such, it's blissfully free of ?the crowds of Brits you'll find in the sun-baked south. It's also the setting for an annual 5000km nude race, which takes place every July to promote naturism. 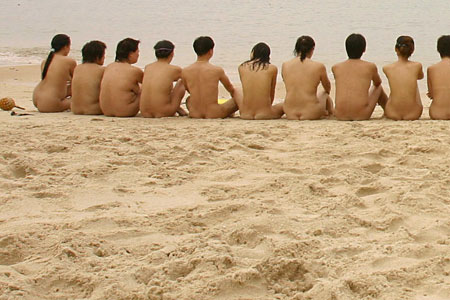 The beach is just ?a 10-minute drive from Bilbao – famed for its dazzling ark-like Guggenheim Museum, a shiny titanium creation, and its atmospheric Old Town, chocka with pintxos (Basque tapas) bars.

When it comes to bare beaches, Spain was one of Europe’s late starters, introducing its first one in 1979. But according to nudists' bible, The World Guide to Bare Beaches, Spain is “now amongst the most enthusiastic and progressive advocates of the bare beach lifestyle”.

Even in a nation as prudish as the UK, stripping off now seems to be the activity du jour. Hip models such as Daisy Lowe and Lily Cole have posed starkers in recent years and events like the Naked Bike Ride held in Brighton and London amass much media attention and are hugely popular with people that appear to have been just desperate to strip off in public.

With this in mind, I start to feel less self-conscious about being naked; until my boyfriend announces he's off for a surf (with a wetsuit on, ?I might add)Alone and unclothed, I suddenly feel vulnerable. But ?once I notice that no one’s staring at me (should I be offended that they’re not?) I relax and read my book.

Among the bathers are families with children and, ?in many ways, it's just an ordinary beach with ordinary ?bathers, sans swimwear. True naturists like to be at one ?with nature, not be exhibitionists.

There is one couple ?in their fifties, however, who spend the day parading up ?and down the beach – are they exercising or are they flouting their bits?

I can't help but stare at everyone, as I'm not used to ?seeing such a sea of genitalia. The longer I sit here pretending to read my book, the more I learn about ?male and female anatomy. 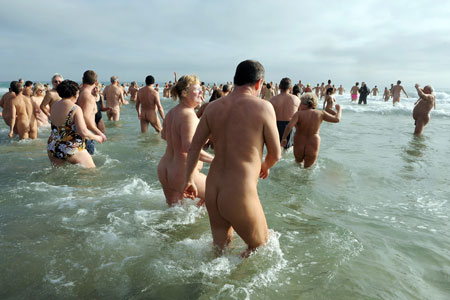 By the end of the day, being naked feels normal and ?it almost feels like a chore to get dressed again. But at ?least I get to go home with the perfect no-strap-marks tan.

Fly to Bilbao with easyJet or Vueling. Return flights from £72. Sopalana is a 10-minute drive from Bilbao. Hire a car with Avis from £97 for three days, or take the metro from Bilbao to Sopelana (35 minutes)

London event: Tribute band The Get Back Beatles at Floridita – March 28

Sesame street, or beat street? learning from the ghetto