Let’s stick together: Paraplegic surfing made possible with duct-tape

It’s not a simple matter of slipping on a wetsuit and jumping into the drink for Pascale though. In order to surf Pascale needs the help of local surfer, Tyron Swan.

Pascale is helped into a backpack with leg holes cut into it, Tyron puts on the backpack and with a little help from a friend a whole roll of duct-tape is wrapped around the two.

The idea came about, as most great ideas do, after a few drinks in the pub. Despite having accepted that she would never walk again, Pascale was determined to try surfing. Tyron, a good friend of her sons, thought he’d be a good contender to surf with Pascale on his back. 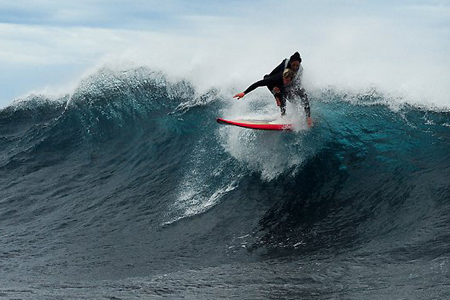 Despite disbelief from just about everyone who heard the idea, Pascale and Tyron managed to catch their first wave with the help of a tow-in from a jetski.

Since then they’ve been practicing together and perfecting their technique. They’re currently planning a trip to the West Australian Coast in an old mini bus with a wheelchair lift.

Pascale and Tyron are hoping for a duct-tape sponsor in the future.

The Best Holiday Locations In 2017