The 26-year-old Uruguay international apologised after the match on Sunday and the next day was issued with a fine by his club.

Liverpool has said they were “shocked and disappointed” by the heftiness of the suspension, while Suarez thought he deserved the standard three-match sentence for violent conduct. 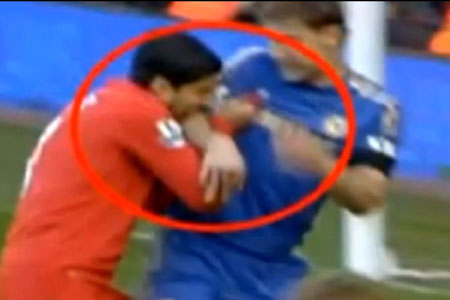 The FA didn’t agree and Liverpool has until midday Friday to appeal.

“A three-person independent regulatory commission today upheld the FA’s claim that a suspension of three matches was clearly insufficient and the player will serve a further seven first-team matches in addition to the standard three,” an FA statement read.

“The suspension begins with immediate effect.

“The Liverpool forward had accepted a charge of violent conduct but had denied the FA’s claim that the standard three-match sanction was insufficient for the offence.

“The incident was not seen by the match officials and has therefore been retrospectively reviewed.”

Suarez will miss the final four games of the season and the first six of next.

He was suspended for a similar incident in 2010 when at Ajax after biting PSV Eindhoven’s Otman Bakkal on the shoulder.

In December 2011, he was banned for eight matches and fined £40,000 by the FA for racially abusing Patrice Evra.

Despite disciplinary issues, Suarez is on a the short-list of six for the Professional Footballers’ Association player of the year award, which Tottenham star Gareth Bale is the hot favourite to take out.