The scene: The Bank Hotel hasn’t taken the same route as other renovated Newtown pubs, there are no coloured fairy lights, no astro turf and not a single piece of Tiki themed paraphernalia in sight.

Instead the revamp in the beer garden is purely for the foodies. Although Licensee Jake Toivenen tells me they’re going to work on the front bar to make it “less shiny”. (If you’ve ever visited the hotel, off grungy King Street you’ll know what he means.) A little smeared grease on the bar wouldn’t go amiss. 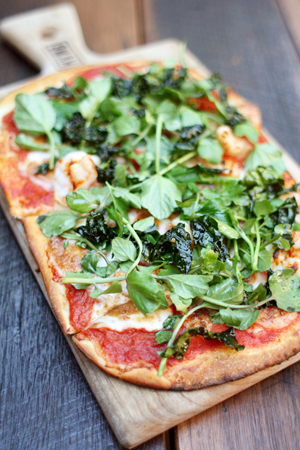 The grub: It’s pub food with a modern twist. Sticky lamb ribs $13 are messy (and sticky) but don’t look like dinosaur bones. They’re small but incredibly tasty with their lemon yoghurt dipping sauce.

Smoked oyster tin $12 is exactly what it says on the tin, yes they come in a tin, and with crackers and creme fraiche, they’ll be perfect for balmy summer evenings when you don’t want a meal, but you do want cocktails.

For something a bit heavier, the pizzas are huge, try the roasted prawn with harissa $19. With the chopped black cabbage on top it almost has a Japanese flavour to it.

If you’re feeling dusty, or you’ve just happened to sleep all day, try the baked eggs with Tuscan beans $14; coupled with a schooner of Young Henry’s Real Ale, consider your hangover cured – or your breakfast made.

If the most exotic word you know is coleslaw, don’t despair, there’s a glossary on the side of the menu for all the bloody foreign words, mate. Things like speck, porchetta, galette (yeah me neither). 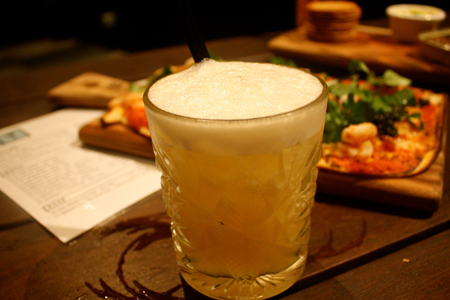 Behind the bar: As mentioned, Young Henry’s is on the taps, a locally brewed craft beer, but you should also give the cocktails a shake. In particular the Whiskaretto $14, a whiskey and amaretto sour. I can’t work out if it’s a ladies’ drink or a blokes, so let’s just say it’s for the androgynous Newtown-folk and be done with it.

The Berry High $15 is also worth a mention, it’s fruity and fun and reminds me that summer might be over but there’s still a glimmer of hope through the grey times. Now if I just stay drunk for three months…

Bill please: Grab some mates and share everything for a reasonably priced affair.

Verdict: Finally some respite from all the Thai. A great place to start your afternoon, or end your night, or make like the Hotel California and never leave.

Other traveller reviews on Panama

Be ‘Dammed in Amsterdam: Swap toking for boating for a genuinely laid-back experience