Boxing star Taylor looked focused but exhausted as the bout wore on, under no illusions about her tough opponent, Russia’s Sofya Ochigava.

The Bray boxer was on track to win after battering jikistan’s Mavzuna Chorieva 17-9 in yesterday’s semi-final.

The ExCel boxing arena turned into a sea of Irish flags and chaos as Taylor burst into tears when her win was announced.

“This is what I dreamed of all my life and now I have the chance to box for a gold medal,” Taylor said yesterday.

“The support out there is unbelievable: I feel like I’m boxing at home in Dublin, really – 10,000 Irish people screaming for me, this is what dreams are made of and hopefully I can make everyone proud.” 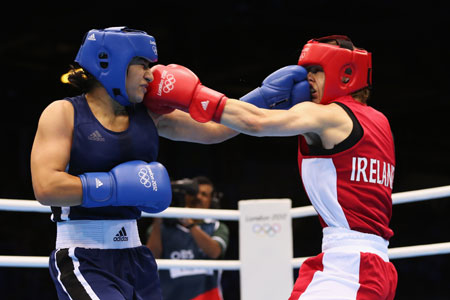 As well as thanking her loyal fans, devout four-time amateur world champion Taylor will be offering some words to god. She said after yesterday’s win:  “It was a great victory. Glory to God.”

The only bitter words after Taylor’s win came from her opponent, Russia’s Ochigava, who claimed Taylor is favoured by the judges.

Here’s what happened in Taylor’s home town, Bray, when she won yesterday.

Praise for Taylor has come from all quarters.

Irish president, Michael D Higgins, said in a statement: “Taylor has lifted the spirit of the nation with her magnificent gold medal winning performance at the London Olympics today. I want to offer my sincere congratulations to Katie, who has represented this country with such courage, skill and pride over many years.”

Taoiseach, Enda Kenny, added praise, saying: “Katie Taylor is not only an Olympic champion, she is a force of nature whose pioneering spirit and boxing brilliance have seen her realise her personal dream of winning Olympic gold.”

TNT vs Food: Where to go for the biggest, hottest and most extreme meals in London

Sport opinion: Quit getting in a spin over rotation polity – it’s reality, and Lance Armstrong’s Admission means nothing