As Irish fans waved Tricolour flags and chanted his name, Barnes gave the boxing match all her had, drawing in the semi-final with Zou Shiming 15-15, but bowing out 45-44 after a countback.

Barnes last took bronze in the Beijing Olympics, again defeated by Shiming at the semi-final stage.

The Irish boxer’s sense of humour was not diminished by the fight and he tweeted soon afterwards:

“Journey ends here, thanks for all the support people, Zou Shimming if you are reading this LEAVE ME ALONE! #devastated.”

After some minutes, Barnes returned to Twitter, adding: “I’m proud of it, because he beat me 15-0 in Beijing, so to bring it back to 15-all is not bad.” 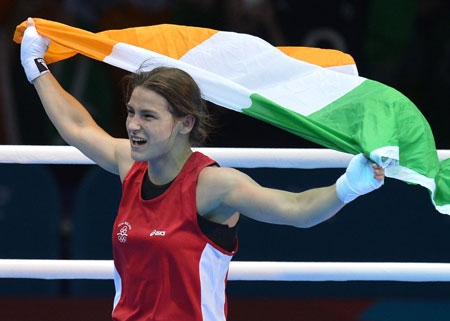 Ireland’s focus is likely to remain on Kate Taylor, the 26-year-old boxer who brought home gold yesterday in an Olympic bout that was celebrated in the London 2012 ExCel Centre by the most exuberant, passionate fans of the London 2012 Games.

In Taylor’s hometown, Bray, 7,000 people in Tricolour flags and facepaint, packed the streets to watch her fight on big screens.

It has been revealed that demand for electricity in Ireland dropped by six per cent as Taylor’s fight was on as a result of a mass exodus from work to watch the fight.

My London: Genesis Cinema owner and director Tyrone Walker-Hebborn on why he loves London