Daniel Thomas, a football player for Welsh club Port Talbot Town FC, is being investigated for a rude Twitter post about Daley and his diving partner Pete Waterfield.

Daley appears to have been subjected to a barrage of rude tweets after he came fourth and missed out winning a medal at the 2012 Olympics in the 10m synchronised dive on Monday.

Among the hate-tweeting was this vile offering from Thomas: “if there is any consolation for finishing fourth at least daley and waterfield can go and bum eachother #teamHIV” 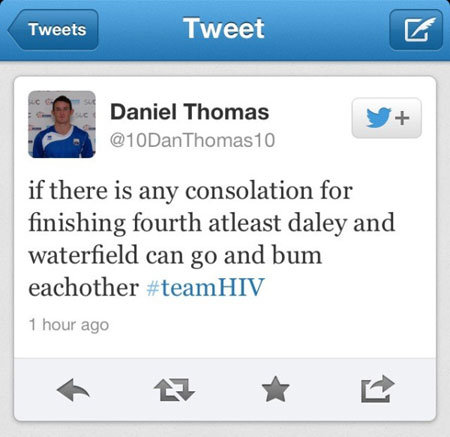 Port Talbot FC officials are claiming that their player was the subject of a prank after he left his phone lying unattended. However, Thomas has been suspended.

A club spokesman said: “Port Talbot Town Football Club can confirm Daniel Thomas has been suspended from all involvement with the club until we have carried out a full internal investigation.

“We were made aware to an offensive comment appearing on the Twitter feed of one of our players.”

Meanwhile, a 17-year-old whose Twitter name was Riley69 was arrested over a malicious tweet relating to the death of Daley’s father.

The teenager has been given a harassment warning and was bailed pending an investigation into other communications on his Twitter account.

Both the 10DanThomas10 and the Riley69 Twitter accounts have now been deleted.

Out-of-body experiences ‘all in the mind’

The Grey Outdoors of Tasmania