For most, Jamaican runner Usain Bolt is already a legend. He won three gold medals in the Beijing Olympics and defended his 100m title with disdainful ease at London 2012 on Sunday.

However for the fast man himself, only the parallel defence of his 200m gold will infer legendary Olympian status upon him.

The pressure is on and half the world will be watching the Athletics track at 20:55 this evening when Bolt races the 200m final. The Swedish handball team-loving Jamaican however is undaunted.

Bolt has declared that not only is he aiming to win the final, beating his fellow countryman Yohan Blake, who is both a friend and rival, but he will also break his own speed record.

“It is a possibility, definitely,” Bolt said when asked about breaking his record of 19.19s, set in Berlin in 2009.

“The track is fast and there are a lot of great competitors. I am looking forward to it. If I put it on my mind you never know if it is going to happen.” 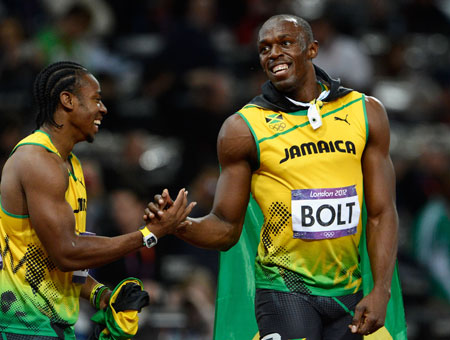 Bolt and Blake: Friends, but not during the 200m final

It seems almost certain that Bolt will win his race tonight. The 25-year-old looked relaxed as he won his qualifying last night, cruising in at 20.18 seconds.

However, Blake will certainly be giving his compatriot a run for his money after finishing his own qualifier in 20.01.

Bolt has dismissed the competition.

“No doubt whatsoever,” Bolt said when asked if he would win tonight’s race. “I’m ready. This is my favourite event, so I’m looking forward to it. I really pushed myself in the first 70 metres and then I tried to take it as easy as possible. I ran harder round the corner than I have in a long while. The execution was probably 90%.”

While Blake has been cautious about predicting a win against Bolt, he has by no means ruled it out.

“Anything is possible in the final tomorrow. It’s going to be a good race,” he said after winning his 200m qualifier yesterday.

If Bolt defends his title tonight, the OIympic legend tag will have been earned. The last time an athlete defended two individual track titles at successive Games was when Lasse Viren won the 5,000m and 10,000m in Munich and Montreal in 1972 and 1976.