Recycling bins in the City of London are monitoring the phones of passers-by, so advertisers can target messages at people whom the bins recognize.

Renew, the startup behind the scheme, installed 100 recycling bins with digital screens around London before the 2012 Olympics. More recently, though, Renew outfitted a dozen of the bins with gadgets that track smartphone by a unique identification number, known as the MAC address.

That allows Renew to identify if the person walking by is the same one from yesterday, even their specific route down the street and how fast they’re is walking. 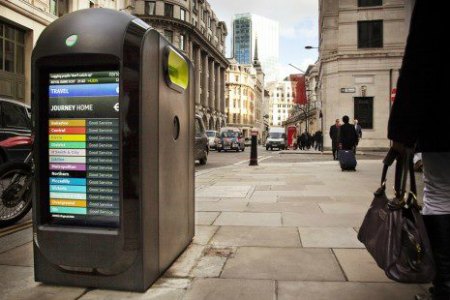 The technology—famously envisioned in the movie Minority Report, is supposed to help advertisers hone their marketing campaigns, except, in this real-life example, brands are scanning iPhones instead of irises.

In the first month after installing the trackers, Renew says it picked up over a million unique devices. On July 6, a record day, its bins identified 106,629 people, taking note of their presence 946,016 times, according to the company.

“From our point of view, it’s open to everybody, everyone can buy that data,” Renew CEO Kaveh Memari told Quartz.

”London is the most heavily surveillanced city in the world…As long as we don’t add a name and home address, it’s legal.”