It’s a world away from the hustle of central London, with beautiful parks and just the odd tourist toting a large camera. However, you know you’re in the capital, as there are plenty of suits.

Pimlico is bounded at the south by the Thames, bumping up on Belgravia to the north, Chelsea to the west and Westminster to the east. Its draw is that it’s a leafy, quiet area.

And, as such, there’s a wealth of professionals living here who want to leave their hectic lives at the office.

Why Pimlico?
Very similar to Kensington and Chelsea in appearance, Pimlico is a more affordable version with all the same luxury.

“You’re walking distance from Belgravia Street and Sloane Square, but without the Chelsea prices, so you get a lot more value for your money here,” says Louise Verrall from Douglas & Gordon estate agents on Wilton Road.

The convenience of the location, as well as the obvious appeal of living near the Victoria line is ideal for commuters.

“Obviously being so central and with the good transport links, we get a lot of people going to the City everyday and the Mayfair, Greekpark areas,” Verrall adds.

Filled with private gardens and the public St George’s Square, there’s no shortage of places to stretch out on the weekends.

A short walk will land you at major tourist locations, such as Buckingham Palace and Green Park, or the banks of the Thames.

You are on a really tight budget, although if you look hard enough, you can bag a flatshare for about £80pw (at the cheapest).

And Pimlico’s not for you if you want to party around the clock and expect wild nights mid-week. The nightlife scene in here is much more sedate. 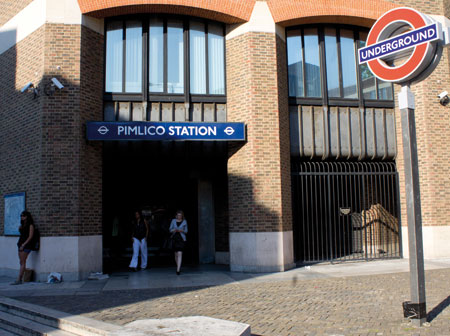 Where to hang out
The blessing of being a lovely, quiet neighbourhood brings with it a shortage of pubs and restaurants.

Places to check out are Pimlico Spice, an Indian restaurant on Lupus Street, and Cask on Charlwood Street, which offers a dazzling array of ales from around the world.

On Saturday mornings, the Pimlico Farmers’ Market opens up in Orange Square. With a great array of seafood, bakery items, organic vegetables and fresh fruit, this market is a great place to stock up on the ultimate hangover breakfast.

The connections
Pimlico falls on the major London transportation hub of Victoria, making it a key area to live for commuters. The two major Tube stations connecting it to the rest of London are Victoria and the Pimlico station on the Victoria line.

National Rail services can be accessed at Victoria station. Many outward buses can be picked up at Victoria, but the 24, 360 and C10 run through Pimlico itself.

You’ll find a load of flats on offer – with houses harder to come by. But it retains its character, even though many of the Victorian townhouses are being converted.

#355 Cook the snags at an Australia Day Barbecue