London Marathon 2011: The runners, where to watch

The London Marathon 2011: Witness tears of joy, faces twisted in pain, displays of pure elitism and absurd costumes as runners hit the capital this April.

At least 36,000 runners will descend upon London on April 17 for the Virgin London Marathon – a wearisome 26.2-mile route that traces a path along the south of the Thames to the north, crossing over Tower Bridge and past the capital’s iconic sites.

Witnessing this stampede as a spectator is both poignant and exhilarating. The 31st race will see some of the best endurance runners in the world pound the pavement alongside celebrities (model Agyness Deyn is running, as are singer Will Young and glamour model, Jordan) hobby runners and marathon virgins.

Some will do it for prizes, others for personal achievement and many in the memory of loved ones who have died.

In the crowds will be competitors decked in outrageous fancy dress, including Lloyd Scott, 49, raising money for Action Kids, who will crawl the length dressed as Magic. Roundabout character Brian The Snail, with a periscope camera so he can see where he is going.

Whoever they are, all participants agree the support of spectators is vital in helping them get over the line.

We dare you not to get choked up as they pace triumphantly to the finish. 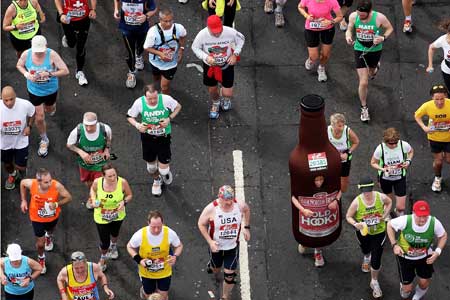 The London Marathon 2011 begins between 9am and 9.45am at Greenwich, with the fastest runners expected at The Mall by St James’s Park at around 11am.

Some great viewpoint include the top of the hill at Greenwich Park for the start, Cleopatra’s Needle, Embankment, for Thames views, The London Eye, where you can see just about the entire marathon as it unfolds, and St James’s Park for the finish.

Runners appreciate support around the Isle of Dogs, between miles 14-21, which can be desolate. There will be 88 pubs along the route which will host bands and official all-round marathon-style revelry.

After you’ve mastered unscrambling a Rubik’s Cube in just 21 seconds, no challenge, surely, is insurmountable.

So that’s why Kilian is going to solve 100 of them successively – and run a marathon at the same time. For his effort, if completed within five hours, he’ll hold a Guinness World Record.

“Nowadays, you have to come up with pretty different ideas to get attention,” said the German graphic designer.

The gambit, however, poses a logistical conundrum. Helping him work through it, will be friends stationed at four points along the route to hand him scrambled cubes and take the solved ones to the finish line for him. Runner Julie Burong will also be by his side.

Kilian will run with at least 2kg worth of cubes in a rucksack the whole way, too. There’ll also be a camera strapped to his chest to prove to the GWR judges that he is worthy of their books.

“I recently did a training run in full costume and people were honking
and and high-fiving me. It was really nice,” he said.

Kilian is running for Prostate Action as his father battled prostate cancer in 2009. Sponsor him at rubiksrun.com.

Should the weather turn inclement, Hewer’s Guinness World Records campaign to knit the longest scarf, beating her own record of 1.62 metres, gets very difficult.

Wool gets very heavy when wet, and a marathon is long enough without being bore down by soggy yarn. However, luckily, Hewer, is old hat. It’s her 20th marathon since 2005. So where did such a zany idea come from?

“I was discussing ideas to get attention for my run with a friend one day and she said to me ‘why don’t you just stay at home and do some knitting?’, and an idea was born!,” says Hewer, from Robertsbridge, who last year crocheted the longest chain (77.4 metres).

Hewer is running for Alzheimer’s Research UK in memory of her mum. Go to extremeknittingredhead.blogspot.com

Like most genius ideas, this one was conceived in a pub.

While O’Connor’s mates bottled it when they woke up sober, he stuck to his guns. A music teacher from Cardiff, many a fellow runner will set pace to O’Connor’s 52 tunes (two per mile).

Having wielded a trumpet in both the London and New York marathons previously (his time was 4hrs 14mins in NY), he roughly knows the stages of a race which call for a motivational melody. That’s when he’ll blast Chariots Of Fire and Benny Hill’s ‘chasing song’.

“I used a miniature trumpet last time, but this year I’m playing the big boy and it’s going to get heavy,” he said. Much to the delight of his neighbours, O’Connor has not been training with a trumpet

O’Connor is running for Bowel Cancer UK in memory of his mother. Go to justgiving.com/Frank-O-Connor

Twomey, a PE teacher living in Lewisham, should run with a warning sign.

The Irishman has identified potholes and street furniture (by crashing into it) along his route, but he can’t prepare for the moving targets. The most recent was an unsuspecting granny.

“The poor woman!” said Twomey. “She was proper old and almost had a heart attack. She genuinely thought someone was mugging her.”

A fellow runner in a Dublin race was also a Twomey casualty, falling into a heap when Twomey clipped him. Thankfully, the backwards runner will do his maiden marathon with cohorts, Jo Collins and Nick Morgan, to ensure no one else gets hurt!

Twomey is running for UK Cancer Research in memory of his father. See backwards4cancer.com

For more information on the 2011 Virgin London Marathon,  visit virginlondonmarathon.com