So prolific are London’s Christmas markets and fairs, even the biggest miser will have difficulty resisting a spot of browsing.

One of London’s most vibrant markets, Old Spitalfields, will go into Yultide mode, extending its opening hours for Christmas and hosting a programme of entertainment (See oldspitalfieldsmarket.com).

Columbia Road, which is one of the few streets in London composed entirely of independent shops, will extend its trading hours to 9pm each Wednesday in December for your Christmas shopping pleasure. There’ll also be food and entertainment between 5-9pm. (See columbiaroad.info).

Greenwich Market, always a trove of unique wares, will be bedecked in tinsel and holly and host a Santa’s grotto and carol singers. (See greenwichmarket.net).

Pucker up for a visit to Covent Garden, because, as well as its Real Food Market each Thursday, a giant Christmas tree will light up only with the power of two people kising. There will also be reindeer petting in the east piazza each Saturday (See coventgardenlondonuk.com).

Nothing says festive like little German stalls and, erm … schnitzel. Throughout December, Southbank will host a Cologne Christmas market crammed with treats.

Alongside it, the Christmas Real Food Market, between December 3-5 and 17-19, will sell gourmet, locally sourced food.

Or, just gorge on a guilty treat. The Southbank Chocolate Festival, between December 10-12, will include chocolate-making workshops and truffle-making demonstrations from the masters. (See southbankcentre.co.uk).

Winter Wonderland, a traditional German market, is the mother of London’s Christmas markets and occupys a swathe of Hyde Park where you can sip on a gluhwein and down a bratwurst. Glistening chalets will sell a host of quaint stocking fillers and tree decorations (See hydeparkwinterwonderland.com) 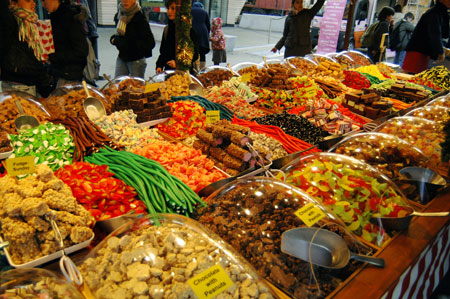 In the unexpected tranquillity of Norfolk Square Gardens, the Paddington Market will sell crafts as carols are piped through the air, between November 29-December 3. Poise your cameras on December 1 when Paddington Bear turns on the Praed Street lights.

The Ethical Just Got Fabulous pop-up market at the 20th Century Theatre, Notting Hill will sell boutique ethical goods from December 4-5, where you’re bound to pick up something for a fussy friend. Organisers will help you warm up with some mulled wine and live jazz.

Also sate your ethical conscience at the theatre between November 25-26 in the Homeworks Christmas Sale, which will sell handmade and upcycled ethical gifts.

Along the same vein is the Fairtrade shopper’s market in the Salvation Army’s Regent Hall in Oxford Street on December 5. You’ll find some unusual stocking fillers from the world over, plus craft workshops and a clothes swap.

At the Bust Magazine Christmas Craftacular in Bethnal Green on November 28, you can learn how to crochet a moustache. If you fail to see the use, there will also be workshops on crafting your own gifts, plus DJs to dance to and a tea room with buttercakes (See bust.com).

It’s not everyone’s cup of tea, but a Marmite pop-up shop and cafe in the Quadrant Arcade, 2 Regent Street, is novel. Visit for some Marmite on toast and get your mits on a host of cult gifts. Aussies, keep an eye out for the Vegemite Marmite taste-off (See marmitepopup.co.uk).

Introducing a little mystery to Christmas, food blogger Ms Marmite is hosting an Underground Farmers and Craft Christmas Market – the farmers’ market in a flat, on December 5. The exact location of the Kilburn flat is revealed when you buy your £5 ticket (See wegottickets.com). 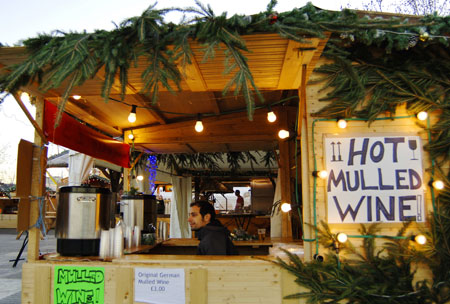 Real life huskies will be the star of the show at the London Wetlands Centre’s Winter Wonderland Weekend on December 11-12.

Its shop will be stocked with wildlife-themed festive stocking-fillers and you can wrap up your shopping with an amble about the wetlands’ 42ha  wildlife oasis. Enjoy!

London authorities are all too aware of the nightmare that is shopping on Oxford Street during Christmas. So, the kind folk are banning cars on Saturday, November 27 to spare us the hassle of trying to negotiate waves of shoppers.

The West End will be a completely car-free zone, with Oxford Street, Regent Street and Bond Street all closed all traffic.

Free entertainment will provide the atmosphere and there’ll be special offers and promotions in the big stores.