The debate over the bill, featuring speeches from 90 representatives, took place over two days ended with a majority vote of 242 against blocking the ‘wrecking’ amendment.

The Church of England and Church in Wales would be banned from conducting same-sex ceremonies, which are on track to be introduced in summer 2014. However, other religions would be permitted to opt in to gay marriage.

Lord Browne, former chief executive at BP said he thought that gay marriage was ‘good for business “People are happier and more productive and make more money for their company when they feel they are included and can be themselves.

“Giving gay couples the freedom to marry sends an important signal of inclusiveness. If that freedom helps gay people to be themselves in both their private and professional lives, it will eliminate one more barrier to a true corporate meritocracy.”

Human rights campaigner Peter Tatchell said “We are another step closer to our goal of equal marriage. It signals that the House of Lords accepts the principle that we should all be equal before the law.”

Ben Summerskill of Stonewall said “Britain’s 3.7 million gay people don’t deserve to be second class citizens in their own country. A tough fight lies ahead and we’ll continue to work tirelessly every single day to get equal marriage through the Lords.” 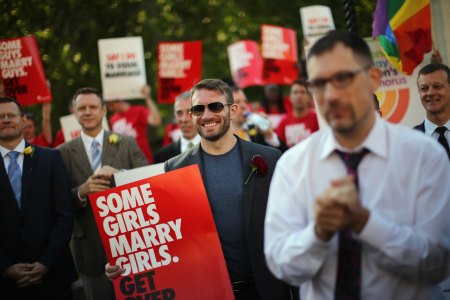 On the other side of the arguement, retired British Army officer Lord Dannatt called the bill “an abuse of the democratic process”

“Following due democratic process and procedure is a principle that I spent the 40 years of my professional life as a soldier upholding.

“I may not personally have understood or approved the circumstances of those who were members of the armed forces LGBT community but I had an obligation to respect them as individuals.

“Such respect and tolerance is being severely challenge by this ill-thought through Bill.”

The Archbishop of Canterbury Justin Welby said that he “could not support the bill as it stands.”

“For these and many other reasons, those of us in the churches and faith groups who are extremely hesitant about the Bill in many cases hold that view because we think that traditional marriage is a corner stone of society, and rather than adding a new and valued institution alongside it for same gender relationships, which I would personally strongly support to strengthen us all, this Bill weakens what exists and replaces it with a less good option that is neither equal nor effective.”

Colin Hart of the Campaign for Marriage said “The government may have won the vote today, but what was clear from the debate was the huge opposition to almost every part of the bill.

“We will continue to campaign to save traditional marriage and today’s vote and the concerns expressed by many peers mean we will be able to introduce safeguards that will protect teachers, registrars, chaplains and anyone who works in the public sector. And if the government refuse to accept these changes, they risk losing the legislation at third reading.”

According to the BBC, support for the bill in the House of Lords came from 80 Conservatives, 160 Labour peers, 73 Lib Dems, 68 crossbenchers and nine others.

Images via Getty.
Video via BBC.

Hotel sued for £160k after travellers bitten by bed bugs

The Goo Goo Dolls on their ’emotional’ new album