‘Lucky to be alive’: No lives lost in south-east Australian bushfires after lessons are learned from Black Sunday

But despite fires still raging and fears of more as temperatures were due to rise again over the weekend, firefighters are hailing it a successful operation with no fatalities so far.

Tasmania Fire Service chief Mike Brown, whose state has been hit the worst with at least AU$50m (£33m) in damage, said many lessons had been learned after 173 people were killed and 2000 homes were destroyed in the 2009 Black Sunday firestorm.“

The fact that so far we’ve had no loss of life does distinguish these fires from so many of the tragedies that Australia’s experienced in the past,” he said.

“The protection of life in the face of such catastrophic conditions is a very significant achievement.

“It’s a good outcome but at this point in time we really must use this as a learning opportunity for the future.”Under the system introduced after Black Sunday, a “severe” warning was declared in parts of Victoria, where six people were injured, on Friday.

“Catastrophic” fire danger ratings were in force in some areas on Tuesday, which was billed the worst fire day in New South Wales’s history.

The catastrophic rating means fires will be uncontrollable, unpredictable and fast-moving, with evacuation the only safe option.Prime Minister Julia Gillard said: “The word catastrophic is being used for good reason.

So it is very important that people keep themselves safe, that they listen to local authorities and local warnings.

This is a very dangerous day.”Gillard also praised the heroics of firefighters, battling tirelessly against raging blazes. And residents were also hitting the headlines for bravery.

A photo taken by Tim Holmes, 62, went viral around the world. It showed his wife and their five young grandchildren clinging to a jetty, neck-deep in water while an inferno tore towards their property. 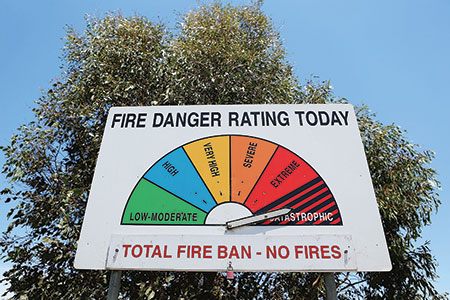 The family took to the water for three hours to shelter from “tornadoes of fire” roaring through Dunalley, Tasmania, which was destroyed in the blaze last Friday.

“The next thing we knew everything was on fire, everywhere, all around us,” Holmes said.

“There was no other escape. We had water up to our chins and could barely breathe, it was so toxic.”

Holmes sent the photo to his daughter, Bonnie Walker, to let her know that her children, aged from 2 to 11, were safe.

Walker told Australia’s ABC network: “We just waited by the phone and received a message at 3.30pm to say that mum and dad had evacuated, that they were surrounded by fire, and could we pray.

So I braced myself to lose my children and my parents.”The family escaped after the fire burnt itself out.

After returning to his home, Holmes said: “It’s all gone, every last item, but it’s a great sense of relief to think that we lost not one hair on a child’s head.”

The blazes, fuelled by the “most dangerous conditions for fires on record”, forced the Australian Bureau of Meteorology to add new colours to its forecasting chart.

Deep purple and pink have been included as temperatures were expected to hit 50°C after a high of 48°C last week. 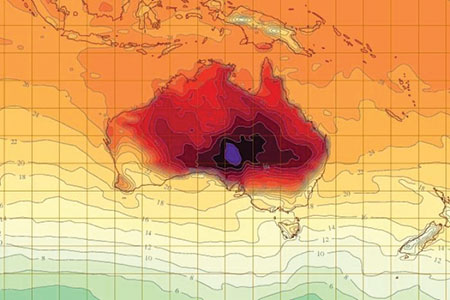 David Jones, the bureau’s manager of climate monitoring and prediction, said of the heatwave: “If you look at its extent, its duration, its intensity, it is arguably the most significant in Australia’s history.”

“You don’t get conditions worse than this, we are at the catastrophic level,” Rural Fire Service commissioner Shane Fitzsimmons said.

Researchers and scientists are pointing the finger towards global warming.

In its most recent assessment, the Intergovernmental Panel On Climate Change predicted the number of days when extreme fire threatens in south-east Australia will increase by 25 per cent by 2020, and up to 70 per cent by 2050.

And Gillard has said it’s a reality the country will have to face.

“Whilst you would not put any one event down to climate change,” she said, “we do know over time that as a result of climate change we are going to see more extreme weather events and conditions.

”The bureau forecast above average temperatures for the remainder of summer, compounding the fire danger created by a lack of rain across central and southern Australia over the past six months.

Although cooler weather swept in last week, with some areas plummeting from 40°C to 24°C in minutes, residents are being warned to “prepare, act, survive”.

Temperatures are expected to soar again next week and ministers are warning that the worst could be yet to come. 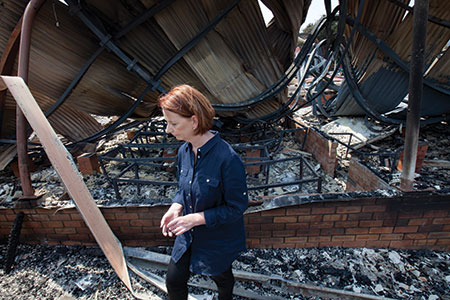 For the first time, Australians used social media to keep up-to-date and share warnings about bushfires.

Even PM Julia Gillard, pictured, took to Twitter, telling followers: “Take care and stay safe as we face extreme heat around our nation. Listen to warnings on the high bushfire risk.”

Fire brigades were also active on the microblogging site, urging residents to prepare for new fires as well as issuing advice.

Better to leave sweat on the road than half your skin if you come off.”

On a clear day you can see forever