It probably says a lot about us as a species that we’re so interested in blooper reels and clip shows where television goes wrong. No good DVD box set is complete without a blooper reel. Something in our nature just makes us find other people’s misfortunes hilarious. The Germans have a word for that, but the British may do it even better than they do. We should probably come up with a word for it ourselves.

It’s into that spirit of enjoying seeing things go wrong that Mischief Theatre entered a few years ago. The former LAMDA students have been amusing and entertaining audiences since 2008 with productions based around a simple concept; everything goes wrong, and the audience is in on the joke. So far they’ve given us a murder mystery play that goes wrong, an interpretation of ‘Peter Pan’ that shares a similar fate, and a performance of ‘A Christmas Carol’ which was broadcast on the BBC, and also featured everything going hilariously awry.

After performing four variations on a very similar theme, the company was probably at the risk of becoming stale. There are only so many ways you can present the idea of ‘a stage show goes wrong’ before the audience become accustomed to the jokes and stop laughing (although they still haven’t tackled Shakespeare, and we’d love to see that). Perhaps with that in mind, Mischief Theatre has branched out into a different form of entertainment – magic. And they’ve got two of the greatest of all time to do it.

If you’ve ever seen a magic show on television, or read anything about magic at all, you should need no introduction to Penn and Teller. The American comedy-magic pairing has been performing since the late 1970s, and are responsible for the longest-running Las Vegas residency show in history. Those of you who have played Mobile Slots are probably familiar with the ‘Vegas Magic’ slot, and that game may be the only version of Vegas Magic in the world which has made more money than Penn and Teller have. Given the talent, luck and incredible success that Penn Jillette and his silent partner Teller have enjoyed, they would probably jackpot the game on their first spin. 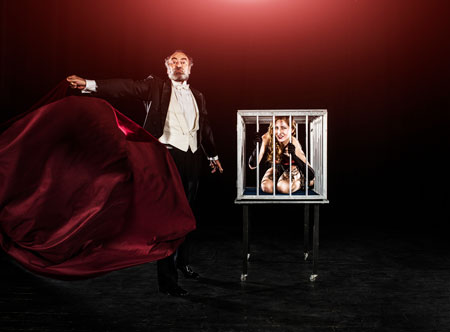 It’s Penn and Teller who are on board with Mischief’s new production (‘Magic Goes Wrong’), and the veterans are doing more than just lending their talents as performers. Both of them have taken an active role in writing the show. Given that Mischief Theatre is already funny, and Penn and Teller have been making people laugh for five decades, the result should be fantastic. The collaboration between the British theatre group and the American legends is down to a happy coincidence.

The last time Penn and Teller graced London with their presence on tour, they were looking for something to do during a break in performances, and called in on ‘The Play That Goes Wrong’ to pass the time. They fell in love with the idea immediately and invited the entire production to come and see them in Vegas. It was at the Vegas meeting that the idea of working together was first pitched, with writing work commencing almost immediately.

The creation of the show marks yet another phase in the career evolution of Penn and Teller, who won over a brand new audience with their ‘Fool Us’ magic shows. The TV talent shows, hosted by Jonathan Ross, invited and rewarded any stage magician who could perform a trick that Penn and Teller didn’t know and couldn’t explain.

Penn and Teller aren’t the only A-Listers who have been seduced by Mischief Theatre’s easy charm, though. There’s a big-name Hollywood director involved in the process, and he encountered the performance group in exactly the same way.

JJ Abrams, best known as a director of both ‘Star Wars’ and the rebooted ‘Star Trek’ franchise, also walked in on ‘The Play That Goes Wrong’ when he had a gap in filming. Recognizing the appeal of the play immediately, he contacted the producers and used his Hollywood contacts to help the show get a run in Broadway. Abrams quickly went from being a friend of the theatre to a full member of the group, and will be working on ‘Magic Goes Wrong’ with Penn and Teller as a co-producer.

Various members of the cast and crew have spoken to the press to promote the production, and have talked about the difficulty of making magic ‘go wrong’ in an entertaining manner. Teller (communicating in written form as opposed to verbal) has reassured audiences that there will be plenty of magic involved, just not necessarily the tricks that the performers appear to be trying to execute. 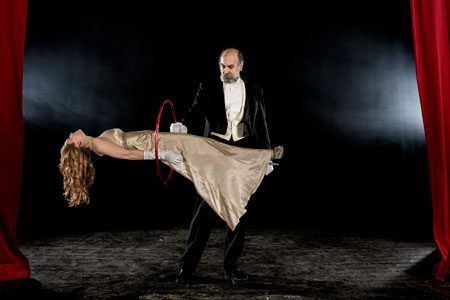 ‘Magic Goes Wrong’ is just one of three shows that the Mischief team will be responsible for during a full year-long residency at London’s Vaudeville Theatre, which commences in September this ear. Another brand new production entitled ‘Groan Ups’ will kick off the residency this September, and will mark a departure from Mischief’s usual style. The play is still a comedy but doesn’t contain any ‘gone wrong’ elements. Instead, it focuses on conversations between people at different points in their life, with the intention of trying to pin down when we actually feel ‘grown-up’ as individuals.

‘Groan Ups’ gives way to ‘Magic Goes Wrong’ in December, with previews commencing on the 14th ahead of an ‘official’ opening night on January 8th, 2020. Tickets for the magic show go on sale on Sunday 10th March. As of yet, details of the third show in the residency have not yet been announced, but it’s understood to be yet another new idea – and one that Mischief Theatre want to keep under wraps for the time being.

If you love comedy, magic or theatre – and it’s hard to imagine anyone who doesn’t enjoy at least one of the three – it seems a certainty that you’ll want to make sure you don’t miss out on ‘Magic Gone Wrong’, so booking early is recommended so as to avoid disappointment. The last thing you want is to leave it too long, go to buy tickets and find that they’ve magically disappeared!