Although Australia did manage to notch another win up for the autumn campaign at muddy Murrayfield, a 21-15 result against the young Scots helmed by Aussie Scott Johnson.

Missing players along with missed kicks by Christian Leali’ifano, five in all, kept the hosts in the contest after outstanding Israel Folau’s try and two penalties put Australia 13-6 up.

Greg Laidlaw’s boot was key for Johnson’s lads, with his four first half successes keeping them in the game.

A fifth penalty came for Laidlaw, but no try, although Folau was called upon several times to chase down Aussie fly-half Quade Cooper’s cousin Sean Maitland (pictured together below), the Scotland fullback, who had other ideas. 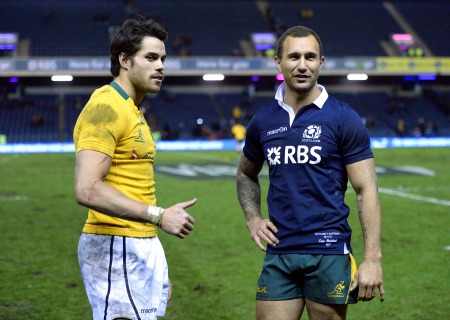 Apart from the win, it was another grim performance against the Scots for Australia, who lost this fixture last year in a rain-soaked Newcastle, NSW.

When McKenzine’s makeshift line-up found momentum their speed and class showed up, but the moments were few and far.

Folau was the shining light for his side though, spectacular in full flight when Cooper put his mate in space and the six foot five speedster was one on one with prop Ryan Grant – no contest.

For the second five-pointer, 20-year-old Reds winger Feauai-Sautia popped up on his opposite right wing to run on to another timely Cooper ball and through Maitland to score.

The Aussies had some extra work to do when a brain explosion from Rob Simmons saw him sin-binned – it could have been red – but Scotland didn’t make the most of the advantage.

Although Scotland got into some dangerous set-play positions in the final minutes, they couldn’t pull off a New Zealand – scoring tries isn’t in their play book yet. 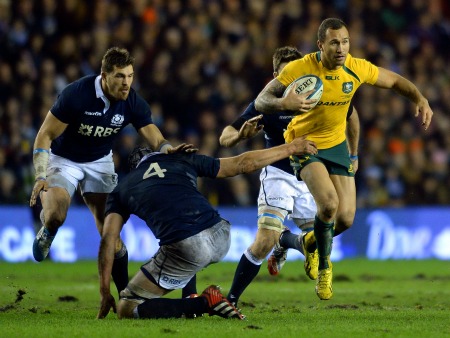 YOUR SPORTS WEEKEND IN A FLASH: All the results that matter in one click (Week ending Feb 16)