You have to be quite imaginative to build a beach resort in a landlocked country, and, I suppose, to think about holidaying there, but when a third of a country is beneath the waters of a single lake, it does start to make more sense.

Malawi (formerly Nyasaland) is a thin sliver of a country squeezed between much larger Zambia and Mozambique in sub-Saharan Africa. Lake Malawi is one of the largest bodies of fresh water on the continent, and the surrounding landscapes vary from mountains with waterfalls, to savanna and grasslands, to broad rivers and sandy beaches. Though desperately poor, Malawi has remained politically stable since independence in 1964, escaping the ravages of civil wars, militancy and famine which have plagued other African states. The Malawians themselves are gregarious, curious and hugely hospitable, earning their country the moniker The Warm Heart of Africa.

Arriving in Cape Maclear on Lake Malawi’s southern shore, you’d be forgiven for thinking you had somehow strayed into the Caribbean. Wooden beach huts with open verandas and a random assortment of kayaks front onto white sands and turquoise waters, a clear blue sky overhead. There are palms, flame trees and bougainvillaea, all in bloom in a riot of red, hot pink and orange. A few small fishing boats are drawn up onto the beach, and as I wandered out onto the jetty, a reggae track was blaring. A few locals hung around hawking souvenirs, and no one was doing anything fast, but hey: this is Africa. You leave frenetic life behind when you land. 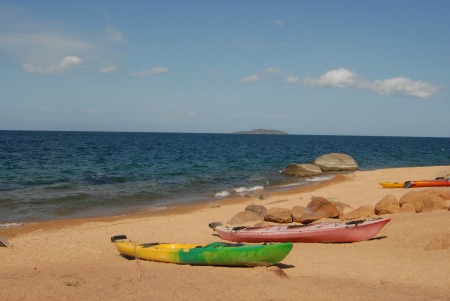 If your priority is lounging in the sun and drinking cold beers, there are any number of small huts to choose from. You can turn up without a booking, and probably stay all season. But I wanted something more – a taste of island life – so I took the motor boat from Kayak Africa (www.kayakafrica.com) to Mumbo, their private island 10km off shore.

Mumbo is a rocky outcrop, rising high above the waves. Historically it was never inhabited on account of its sizeable crocodile population, but the crocs were poached, and Kayak Africa moved in, giving the island a new lease of life. A handful of thatched huts now peak out of the jungly undergrowth, all of them overlooking the water, making it a perfect, Robinson Crusoe-esque retreat.

If you want an environmentally friendly island experience, this is it. There is no mains power on Mumbo, not even from a generator. The breeze from the lake cools the rooms, and the lanterns are solar powered. At a push, the solar lanterns will charge your smartphone too, though the absence of mobile reception makes this a bit of a technicality. There are compost toilets, which smell of nothing more than wood shavings, and if you want water for a shower, it it heated over the kitchen fire and brought to your bathroom in a bucket. Local fish are on the menu, as is Malawian-raised beef. 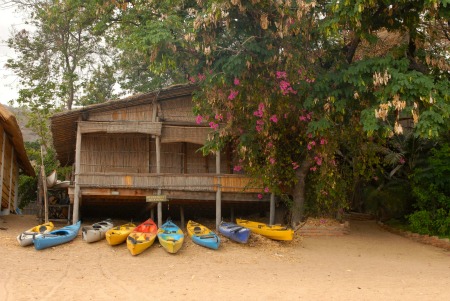 South African Matthew and his Brazilian girlfriend Sophia manage the island, and like their guests, they spend most of the day in the water. Cape Maclear is so called because the lake here is crystal clear, and with daytime temperatures typically well into the 30s, you take every opportunity for a dip. In its shallower parts, the water is almost as warm as a bath. The kayaks, life jackets and snorkelling gear are piled up on the beach, ready to go at a moment’s notice, and so long as the wind’s not too strong, you can circumnavigate the island in a couple of hours. If you don’t have the stamina, or you change your mind part way round, you can always come ashore and walk back to the camp along the tangle of woodland tracks. Water sports instruction is on offer if you want it (and learning to dive is particularly affordable), but for the most part people are happy just paddling back and forth, not exerting themselves unduly. In paradise, of course exercise comes second to relaxation.

However you choose to spend your day (and I spent the bulk of mine lazing in the hammock on my verandah), the sundowner boat ride is a must. It enables you to get a bit further from the shore, and also to appreciate the island’s birdlife. Sea eagles swoop down from the rocks to grab small fish from the waters, and smaller yellow sunbirds flutter by. As the sun sunk towards the horizon, casting its fiery reflection on the water, we dropped anchor and broke open a cool box well stocked with gin, tonic and ice. The boat rocked gently from side to side in the breeze. There was not another boat in sight, nor a single light. The place was utterly silent.

When to go to England