It’s while overtaking Bart Simpson and Marilyn Monroe that I check my watch and realise – with alarm – that we’re going too fast, so hiss at my running partner Simon to slow down.

“In case we burn out?” he asks, referring to the fear of many marathon runners. “No,” I reply, “because we’re being far too naff.”

We’re only at the third mile of the Marathon du Medoc’s full 26.2mile course, yet, if there’s one thing that’s been made clear to us, it’s that if you get a good time in this race, it means you haven’t had nearly a good enough time. And by ‘good enough time’ – I mean, drunk nearly enough wine. If you haven’t realised yet, this isn’t your average marathon.

It was at the Paris marathon expo in April that I first cottoned on to Bordeaux’s legendary annual drinking race. Routed through France’s Medoc region – famed for its red wines, stunning vineyard landscape and fairy-tale chateaus – it wouldn’t be unfair to describe it as the anti-marathon; water stations are replaced with ‘wine stops’, local delicacies such as oysters, foie gras and cheese take the place of the usual energy gels and granola bars, and fancy dress is the (compulsory) outfit of choice – the more extravagant the better. Basically, for a booze loving, running nut like me it was essentially Christmas, my birthday and Easter all rolled into one – just with a little more alcohol and food. I had to get involved.

This year’s theme was ‘countries and their carnivals’, one which had been taken very seriously by some of the participants – with a few even bringing their own home-made ‘floats’ to push around the course – and less so by others – such as the guy who’d merely secured a toilet roll to his head. We, on the other hand, had agonised over it for weeks. What the heck was an iconic, recognisable, English carnival outfit? Eventually, it was a YouTube video of dad-dancing police at Notting Hill that gave us our answer; we would go as carnival police. Genius. 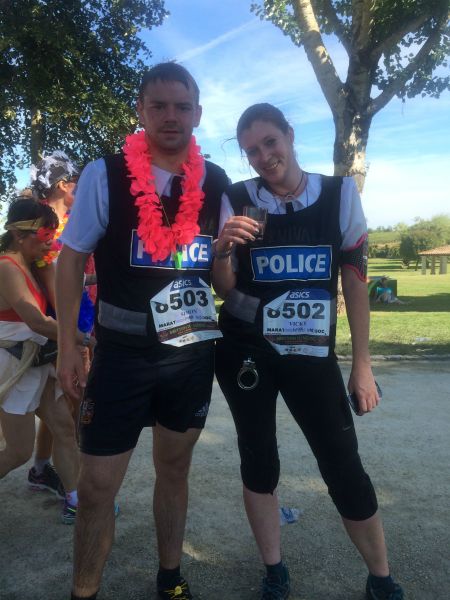 Being the 30th edition this year, an extra 1,500 lucky applicants had been accepted on top of the event’s usual 8,500 quota (although, another 40,000 still had to be turned down). It meant, however, a rather slow start as whooping Smurfs, twerking pandas and over-excited cavemen fought to find space down the narrow country paths. Well, that, and the fact that the majority of the runners – including Simon and I – were also extremely hungover, having attended one of the marathon’s renowned pasta parties the night before. Hosted by nearby chateaus, it’s a chance to carb up and drink lots of fluid before the big day – fluid of the grape variety that is. It meant that by the time we reached the first ‘wine stop’ – just over three miles in – we were more than ready to begin our ‘hair of the dog’ recovery plan. What could go wrong?

Mile 18. That’s what. At least for Simon. We’d been doing so well – too well in fact. At every stop – which come thick and fast – we seem unable to impose any sense of control, helping our selves to one – two – sometimes even three cups of the wine and gorging on, well, everything; fruit, biscuits, waffles, sweets, cake, cheese, bread, pate, before wisely mixing it all up with a jig to the many brilliant bands stationed along the route. Throw in some intense heat (it’s around 27 degrees and shade is as rare as a sober runner), and a few, fully clothed lake dips to cool down, and it could only end one way; projectile vomiting. It’s the screams from some Jedi Knights that alert me to my fellow ‘policeman’s’ ailment – who, by this time, is bent over at the side of the road, clutching his sides in agony. As the sickness begins to cease, I ask if he needs anything. “Another drink,” he says, seriously. Proud, I help him back onto the course and we continue on.

At mile 25 it becomes clear we’ve taken the ‘having fun’ rule a little too seriously. Aware that you had to finish the race in what – we thought – was a leisurely six and a half hours (both usually being four hour marathon runners) the cut-off float – decorated in brooms to “sweep up any stragglers” – is dangerously close, and yet we are dangerously too intoxicated to care. “Final push to the finish?” Simon suggests, before heaving up a second load of local delicacies. “Yep, let’s do it,” I agree, with a perfectly-timed dodge. Eleven minutes later we cross the finish line: merry, sunburnt and – late. Our final time is six hours 52 minutes – we’ve missed the cut-off time. 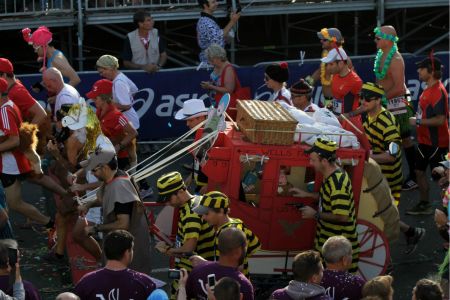 Slow and steady can win the race

Luck is on our side. It turns out, we’re not the only runners to have been a tad on the slow side – a factor being blamed on the heat and extra volume of participants this year (which we, obviously, fully agree with…). As a result, the officials have decided to extend the cut-off time by half an hour, meaning we are still able to pick up our finisher’s prize – and it’s a good’n. The usual medal is accompanied by – wine, of course. A souvenir bottle presented in a carved box, along with some engraved wine glasses. Gratefully accepting our prize (and mentally applauding the last-minute decision to book in luggage for our flight) we stagger off to contemplate the last seven hours. It’s undoubtedly been the most bizarre, hardest, booze-filled – and yet – exhilarating experience of my life. And it’s left me being able to think of only one thing: “Drink?” I ask Simon, who responds with an eager nod. One thing’s for certain; however likely I am to be thrown out of the marathon runner’s golden circle after this, I know I’ll forever have a place in Marathon du Médoc’s membership club – and that makes me very happy.

Climbing Uluru to be banned from 2019

Festival Guide: Day of the Dead

Cricket: Strauss happy for third Test to go ahead