McGrath, Warne, Lee… and now Johnson: Clarke says ‘I told you so’ after 5-0 Ashes annihilation

It was the best known of the Barmy Army’s songs going into the five Test Ashes series and set to be wheeled out over and over when its honoured recipient was actually picked in the Australian side.

The lyrics couldn’t be further from the truth now though, with Johnson having the last laugh with 37 wickets and the mantle player of the series in Australia’s 5-0 demolition (or if anyone still remembers the summer 3-0 loss that didn’t include Johnson, 5-3 in the 10 Test series).

Johnson was a baffling mess – with the exception of his efforts on the bouncy WACA wicket in Perth – when Australia lost the Ashes in 2010-11 and the year before in England in 2009. But as the most potent weapon of an outstanding bowling attack, he’s turned all that on its head.

So impressive was his performance his captain Michael Clarke drew comparisons to the great Test bowlers he’d played alongside, including the two greatest ever, but not before throwing an ‘I told you so’ to the media who wrote off the left-armer as an erratic liability going into the first five-dayer in Brisbane. 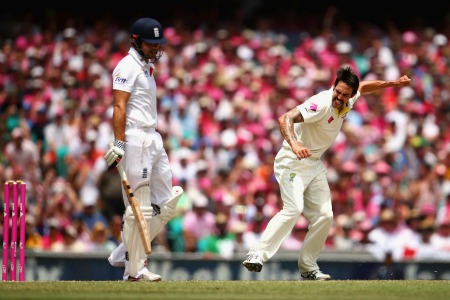 “I hate to say I told you all so but I told you all so,” Clarke said, deservedly being a bit smug after the dominant display from his side given they went into the series as overwhelming underdogs.

“Man of the series, who would have thought, except me and perhaps Mitch.”

The importance of the Ashes was shown when Aussie selectors pulled an in-form Johnson out of the India one-dayers before the series-deciding seventh match so he could prepare for the red ball.

Fears were not for Johnson’s ability, but which one of his alter-egos would turn up. But he regained his blistering pace, regularly clocking over 90 miles an hour, softened up England’s top order and cleaned up their tale ruthlessly. Sure, Ryan Harris and Peter Siddle, along with Shane Watson, were relentless with their line and length, but Johnson was the X-factor.

He’s now eight wickets from joining Test bowling’s 250 club, which he’s likely to join when he spearheads the attack headed to South Africa in February. The questions will still remain, can he do it again against better batsmen on less favourable wickets, but it would be unfair to take this moment away.

Clarke called his attack the best in the world before a ball was bowled in the series, even after a 3-0 series loss in England in which rain and Stuart Broad hindered their chances to win three of their own. He of course stands by that now, but with special mention for his previously maligned firebrand. 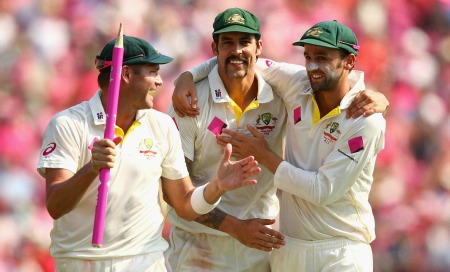 “I think he’s been an amazing bowler for a long time, no doubt about it, and his statistics show that,” Clarke said.

“The one thing a lot of people don’t understand is to be able to bowl at that pace is one thing, to be able to do it for five Test matches every single innings and continue to back it up it’s an amazing achievement.”

Clarke singled out Johnson’s trend-setting first innings spells in Brisbane and Adelaide that marked the tone of the series.

“Mitch has bowled a couple of spells through this series that are without doubt as good spells as I’ve seen throughout my career,” Clarke said.

“And I’ve been lucky enough to play with Glenn McGrath, Jason Gillespie, Brett Lee, Shane Warne, Mitch’s spells have certainly matched the greats that I’ve seen throughout this series, if not better.”

With those four names, along with Dennis Lillee and Craig McDermott, you have the 250 club.

“He deserves all the credit he receives, he’s copped a lot of criticism throughout his career, he’s been dropped from the team – that shows his character,” Clarke said.

“No one in the world can doubt Mitchell Johnson’s character ever again. He’s as tough a character as I’ve played with.”