Ever wanted to perform in front of an audience of millions?

Well, in London you don’t have to be a multi-platinum-selling artist to be heard by thousands of people every day – Underground buskers get a platform on which to showcase their talents and gain valuable experience playing live, all while earning a crust during the busy Christmas season.

An estimated 3.5 million people use the Tube on a daily basis.

And at 25 stations, more than 200 musicians perform at up to 39 busking pitches. To win a slot, and play for festival-sized crowds, buskers must first audition through Transport for London’s Underground Busking Scheme.

Once they pass and are awarded a licence, they are eligible to book a pitch and start playing for tips.

The standard of buskers around TfL’s sites is so high, London has become one of the most desirable places for street artists – and passengers – in the world.

Yoko Hallelujah came from Japan specifically to busk this way. She’s been strumming Beatles covers and her own songs in the tunnels for five years.

“It differs every day – donations are connected to the way people feel. If a Londoner is not in a happy mood, they won’t give us any money.” 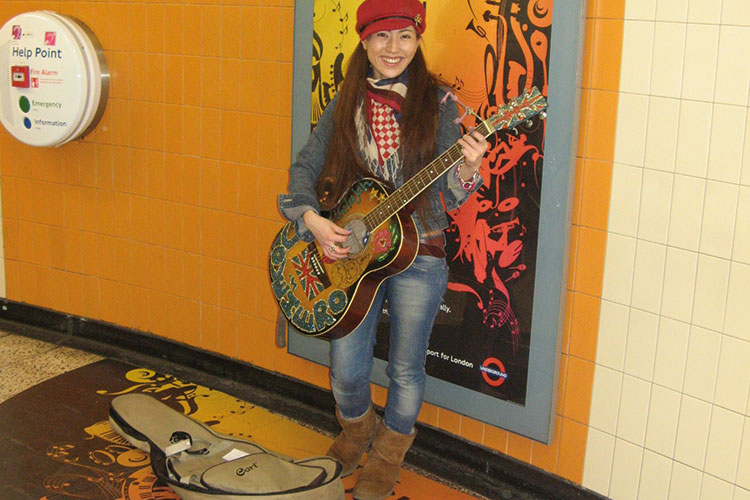 Hallelujah explains her busking has been a launchpad for the release of her own CDs around the world. She says perceptions about her means of delivering entertainment have changed over time.

“My friends now respect my busking and music, so do people back home in Japan,” she says.

“They offer positive encouragement, so I don’t stop.”

Balham’s Jamie West has been performing around the capital’s transport hubs for 10 years and it’s been good to the singer-songwriter – he won the first Young Busker Of The Year award in 2009, which led him to play the opening of the Olympic Village and even radio airplay.

Yet he still hits the streets and walkways.“Busking at Christmas is really good,” he says.

“Not just for the [money in the] guitar case, but also because people are more friendly.

”He plays folk, rock and blues during a set. “Right now, I’m listening to loads of Robert Plant and the Mystery Jets,” he says.

West is proudly a full-time musician.

“This year I released a single called Put Your Love Letters Up about the walls of Post-it notes communities made after the riots,” he says.

He gets to showcase his music daily, but admits punters can be unpredictable.

“One guy started dancing in front of me, then put his hands down his trousers momentarily. I had to stop playing to make sure he didn’t take it any further!” 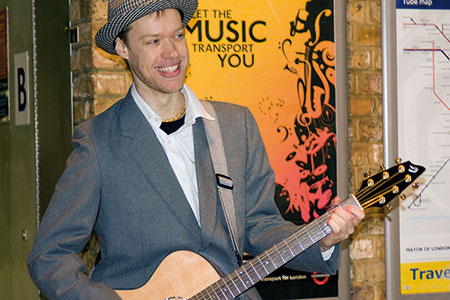 Londoner Matt Jones has played on pavements for 20 years. He loves the fact he can choose his working hours – four to five hours a day, he boasts – and doesn’t answer to a boss.

He plays classic, crowd-pleasing guitar songs.“It’s not going to make you rich, but it pays more than minimum wage,” he says.

“If you’re planning on practising in your bedroom anyway, you may as well get paid for it. Certain spots are more profitable than others.

I play Charing Cross and at busy Oxford Circus.”Indie-rock singer-songwriter Wilfy Williams wants to “sell as many records as Shakin’ Stevens or James Morrison”, both famous former buskers.

He moved from Portsmouth to play to London commuters three years ago.

“My main spot is Piccadilly in the evening, so I get to play for tens of thousands of people a week,” he says.

“While I’m not a rock star, I’m about as close as you can be without a record deal.”

For Williams, it’s all about the music, but in order to survive, he admits that he needs to make £30 a day from passers-by.

“If I’m having a bad money day, I’ll knock out Wonderwall (by Oasis), but I try and avoid it.”

He accepts record deals only go to the best, so artists have to find other avenues to get their music heard.

“This is the practice makes perfect route,” he says.

“Right now I’m like a seed on the ‘Underground’. I’m practising every day getting better and better, but when I’m ready I’m gonna burst outta here.” 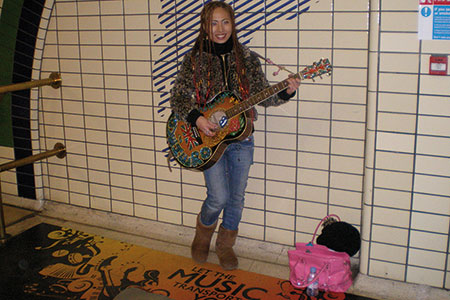 Become so good you’d be willing to give yourself money. The only way to get there is practice.

Tailor your act to busking – pack light and choose material that works with less accompaniment.

Email busking@tube.tfl.gov.uk to book an audition slot. If they like you, you’ll get a licence.

Throw them some coins on the Tube or have a sneak peek here: