In reference to recent generalised media reports currently covering the Steven Lawrence trial referring to ‘the black community’, she complained that the term was lazy and “monolithic”.

On her Twitter account @HackneyAbbott in discussion with freelance journalist Bim Adewunmi Abbott made the comment “White people love playing “divide & rule” We should not play their game #tacticasoldascolonialism”. 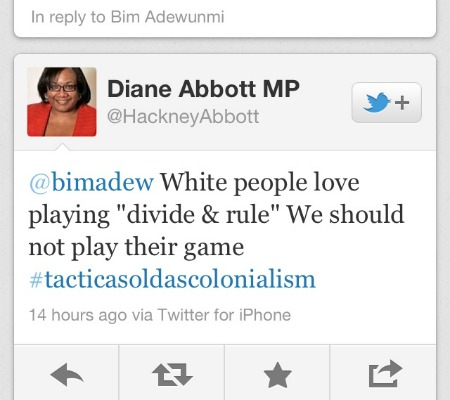 Some Conservative commentators have used the comments as an excuse to call for Abbott’s resignation.

In her defence, referring to the character limitations on Twitter, Abbott joked today:

“Tweet taken out of context. Refers to nature of 19th century European colonialism. Bit much to get into 140 characters.”

MP George Galloway said “Diane Abbott has been my friend for 25 years; only the obtuse would think her a “racist”.”

Businesman and star of BBC’s Dragon’s Den Duncan Bannatyne said “Personally I think Diane abbott should resign just for having no common sense.”

In 1987 Diane Abbott became the UK’s first black female MP. She joined the race to become leader of the Labour party in 2010 but was unsuccessful.

Easy transport option for NZ Open at The Hills and Millbrook