The new Mr England has gone from sleeping rough in parks after becoming homeless at 16 to hanging out with celebs and raking in money from modelling work.

Vaughan Bailey, 23, newly crowned Mr England, has revealed that just a few months ago he was sleeping in bus shelters or on friends’ sofas. Now, he has model agencies fighting over him and has been offered work by TV companies.

Bailey, from Erdington in Birmingham, said: “My parents broke up when I was 16 and the situation was really difficult. I didn’t know where to turn and I was homeless for a year, staying on friends’ floors, moving on from place to place and even sleeping rough a few times. I felt confused and very much on my own.

“My teens were a very dark time, and lots of my friends went off the rails and turned to drugs because they couldn’t cope.”

The strapping Mr England was initially saved from the streets by his interest in basketball which earned him a scholarship to Linderwood University in St Louis, US. However a knee injury forced him to return to Birmingham where he got in touch with a model agency after a friend suggested it.

Initially winning Mr Birmingham, Bailey went on to the finals and was crowned Mr England earlier this month.

“Yes, it’s an amazing turn-around in my life; but I’m determined to stay focussed and keep my feet on the ground. This is a notoriously fickle business and I’m determined to build a long-lasting career, not be a one-trick pony.

“I’m pretty level-headed but last weekend when I found myself sitting in the VIP area of a club chatting to Katie Price, I felt a bit overwhelmed.”

Well, congrats! It doesn’t get much better than sitting next to Katie Price… 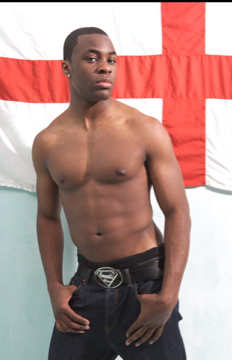 The naked truth: bullfighting is cruel, by Elen Rivas