The return of the ‘Special One’ to SW6 was one of the worst kept secrets in football, with the Portuguese manager having spent much of the last few months fiercely fluttering his eyelids at Chelsea and its Russian oligarch overlord.

Now though with the deal done, Mourinho has told Chelsea fans desperate to see a return to the days of Mourinho’s first, trophy laden stint at the helm of the club, that he has changed in the six years he’s been away.

“I think I arrived in my club, in my Chelsea, in the best moment of my career… So I have the same nature, but I’m much more mature with a different approach to things, I’m more ready to be in a club and stay for a long time.”

Speaking to Chelsea TV, Mourinho’s interview was quoted at length in the Daily Mirror and makes for some interesting, even heartwarming reading.

“I think we are ready to marry again and be happy and successful,” said Mourinho of his relationship with Chelsea’s Russian owner, Roman Abramovich, who in the last few years has disposed of managers in much the same way most men do with plastic Bic biros.

“I met the boss, the owner, and I think within five minutes after some short and pragmatic questions I asked the boss, ‘Do you want me back?’ and the boss asked me ‘do you want to come back?’ – and in a couple of minutes the decision was made.”

Oh, that’s quite sweet isn’t it. Despite all the millions of pounds he makes a year, Mourinho is, after all, just a human being with emotions. He just wants to be wanted.

Mourinho was also simply bubbling with love for the Chelsea fans, with whom he associates himself as one of their own, saying that in all the time he’s been away he never forgot them.

“I know the fans have a special feeling for me. I played against Chelsea with Inter and it was difficult because I was feeling it wasn’t a normal situation for me.

“The people in the stands felt the same as me. I belong to them and they belong to me. To them I can say, ‘I am one of you.'”

While all of this talk might be of concern for neutral observers, who found his self-aggrandising press conferences and fiery touchline persona to be, if nothing else, highly amusing, it must be taken with a pinch of salt. Only six months ago, Mourinho was busy fighting with senior members of his Real Madrid squad including captain Iker Casillas, Sergio Ramos and Pepe, not to mention the Spanish press.

In the last three years he has also been banned from the touchline, repeatedly baited Barcelona’s Argentine superstar Lionel Messi and poked current Barcelona manager Tito Villanova in the eye, during a heated scuffle between players and staff while Mourinho was still at Inter Milan.

It would seem then that the chances of seeing a more measured, mellow Mourinho prowling the sidelines at Stamford Bridge next season would be, at best, unlikely. Which is happy news for all of us. 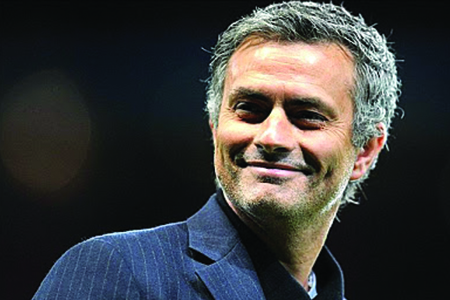 The care worn face that Mourinho wore for so much of the last La Liga season seems, also, to have been transformed. It must be true what they say about the regenerative powers of love.

“I am sorry we don’t start training tomorrow!” he said, with a wry grin. “The players may need a holiday but I don’t.”

Mourinho spoke of the players who have survived from his first stint in charge like Frank Lampard, John Terry and Petr Cech as the “soul of the club” but also expressed his satisfaction with some new signings such as Eden Hazard, Oscar and Spanish superstar Juan Mata.

No mention though for Chelsea’s much maligned £50 million striker Fernando Torres, who could be going the same way as his former Liverpool boss Rafa Benitez who Mourinho will replace at Chelsea.

“We have to improve the team. People are already thinking about how many millions Chelsea are going to spend but I mean improving by work.”

Yes, Jose, the work will be important, but I’m sure the millions of pounds will help too.