No Man’s Land and Father Comes Home From The Wars

With him, looking rather out of place in a shabby, ill-fitting suit is McKellen’s Spooner, his hair banded into a little ponytail and topped with a soft cap, suitable, he no doubt believes, for an ageing, impoverished poet who’s received scant recognition. Meanwhile Stewart’s inscrutable Hirst lives in the cold luxury of success. The two men have, apparently, bumped into each other on the Heath (one wonders what they were doing there!) and over the course of an alcohol-fuelled evening and the morning after, a verbal power-struggle ensues which suggests a decades old rivalry between them.

They may be well into their seventies, but these two knights of the realm haven’t lost their touch when it comes to performing on stage – Stewart’s Hirst’s almost catatonic late-night inebriation transforms to menace the next day, and the unsurpassable McKellen (his rumpled face registering every changing emotion as he tries to gain control of a shifting situation) is sometimes impish, sometimes scared as he’s served breakfast by his host’s henchman, Owen Teale’s gruffly sinister Burgess who makes even the offer of coffee sound like a threat.

The main setting for Suzan-Lori Parks’ three linked plays could hardly be more different – a dilapidated shack in West Texas in 1862, where conflicted black slave, Hero (an imposing Steve Toussaint) has to choose whether to accompany his Confederate master to war against the Yankees. Even though he’s been promised his freedom (not for the first time) if he does, Hero’s still in a potentially no-win situation – if he goes, he could be killed, if he stays, he and his fellow slaves (who are placing bets on his decision) will almost certainly be severely whipped. Part 2 sees Hero, isolated near a battlefield with his Colonel (John Stahl) and a captive Unionist soldier, realising just what he himself might or might not be worth, before (in the third part of what Parks eventually intends to expand into a nine part epic)  he returns home, now renamed Ulysses. 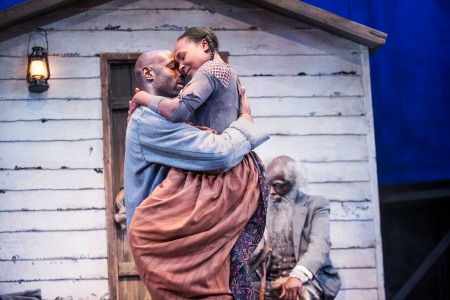 Parks loads the classical references (Hero’s partner is called Penny, his dog (deliciously played by Dex Lee) is Odyssey), but this does not stop Jo Bonney’s strongly-acted production (with singer/musician Steven Bargonetti always on stage) from being both entertaining and thought-provoking as it tackles an important period in American  – and African-American – history.

Mariah to tour Oz in November