Off the rails in The Whitsundays: Where the sailing adventure of a lifetime awaits

What excites a bunch of budget-savvy, bus-loving backpackers to hit the tracks on their east coast adventure? Queensland Rail (QR) has a pretty impressive answer having seen a 200 per cent jump in numbers in the last year thanks to its backpacker passes and fares.

No wonder, there are trips for $50. So, with some spare time and change we caught QR’s Cairns Tilt Train and The Sunlander to see what’s inside, where they go and what you can do when you arrive at a popular spot like Proserpine; a well-known Whitsundays pit stop where you can take a former America’s Cup yacht for a spin. 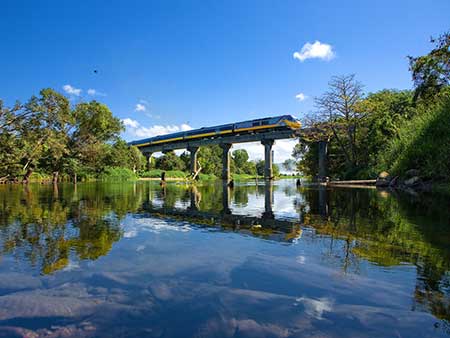 To the Far North

Coming back up to Cairns from Brisbane it’s actually great to hear a little more clickety clack of the tracks when you’re on board The Sunlander; one of Australia’s 10 most unique train trips voted by National Geographic and the Society of International Train Traveller’s top 25 must-do train journeys in the world.

She’s an earlier model than the Tilt and won’t be around for much longer with a new look rolling out in 2014. So don’t miss this train. QR’s Sunlander has very comfy accommodation for all backpacker budgets from single seating to single bunks or sharing a double or even triple cabin to unravel your bones overnight.

There’s always the option of lapping up some luxury though in Queenslander Class but a cosy, reclining seat in air-conditioning is superb with a good book and a good look at the view. 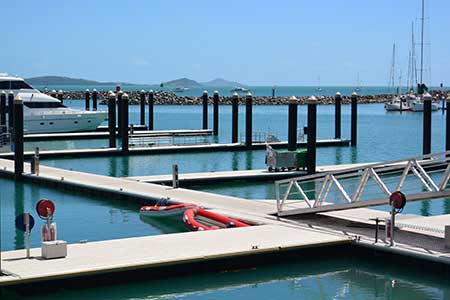 We’re always after a new perspective on backpacker travelling and alternatives that guarantee value for money. There’s no doubt the rail trail is a cheap, convenient and comfortable way to access QR’s 5,000 kilometres of track with a bunch of hop on and off options at all the tourism hot spots from the Gold Coast, Fraser Coast, the Whitsundays, Townsville, Cairns and the outback. That means you see and save at the same time.

For 44 years Chris Jones has worked with QR trains and “every time you blink there’s another picture frame right there, you never know what’s next”. QR’s Tilt and Sunlander trains can get you to some pretty awesome places and one is the famous Whitsundays. So, here’s what do when you jump off at Proserpine: sail. 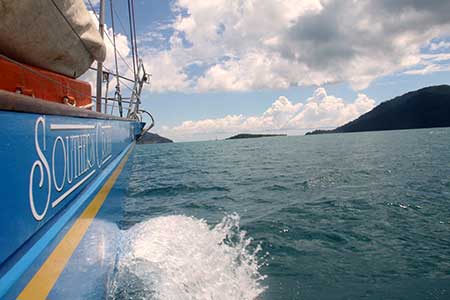 The Whitsundays on board the Southern Cross

Honestly, could my train stop have been anymore brilliant? I’m trying to comprehend what’s unfolding before my eyes as I waltz down the gangway at Abel Point Marina, Airlie Beach (a quick shuttle bus from Proserpine Station). Forget about pinching me, someone grab a four by two and make sure I’m awake.

A 9am sun is blasting out a blue sky and Southern Cross, a stunning 20-metre former America’s Cup challenger, is poised patiently on a mill pond of water.

Six-year seasoned and contagiously-spirited Skipper Warren Pearce (Waz) plants a handshake my way while on board 14 passengers from all around the world wait to be whisked away to The Whitsundays for two days; home of Heart Reef, the world’s number one beach, Whitehaven, and where humpback whales give birth. Some call it an adventure, others a must-do but most, “paradise”. It is. 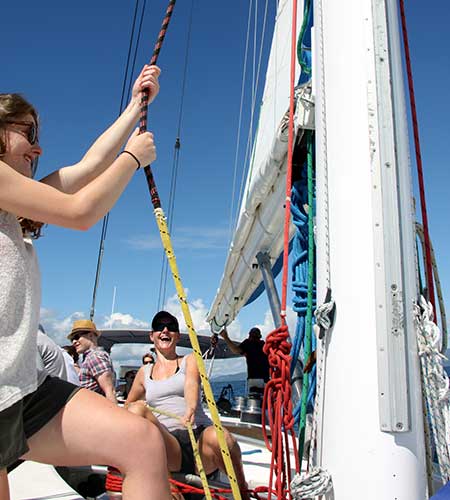 And these numbers say it all; 74 islands in the middle the Great Barrier Reef, 66 still in their natural state and these eight, Daydream, Long, Lindeman, Hook, Hayman, Hamilton, Brampton and South Moll, inhabited.

As we head through Whitsundays Passage there are islands in all directions and the 360 degree view is hard for some on board to believe. Patrick, 32, and Mercedes, 27, are from Heidelberg, Germany, and have four days in the Whitsundays. ”This place is a postcard”. They also quit their jobs to come to Australia.

“When we go back, we’re going to take some of that Aussie culture with us and become more easygoing” grins a sun-kissed Mercedes. She’s right. It’s insanely euphoric out here and these protected waters offer, as Explore Whitsundays Al Grundy puts it, “possibly the best sailing in the world”. 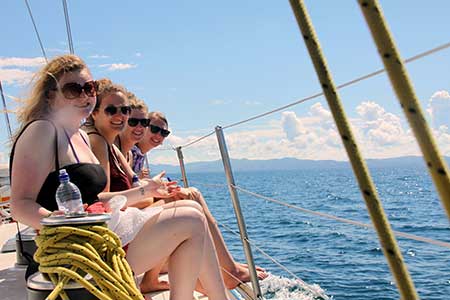 The wind picks up gently and deckhand Tina Wieczorek from Dortmund, Germany, who has “the best job in the world” she’s been told and Renske De Meijer from Maastright, Holland, who is actually on her Learn to Earn course, encourage a few new crew to help hoist the sails. And we’re off.

Paul 30, Chris, 26 and another Chris, 30 from the UK who have all “been planning a sailing trip for a while” admit they’re fans of Aussie bikini fashion. “It’s better than in Blackpool” they reckon. On that note, skipper Waz drops anchor at Langford Island between Hayman and Hook.

Delightful timing as we’re parked in water I can see through in front of an island I can almost touch and a sand cay I can’t wait to run around on screaming “Wilson!” (It’s a Tom Hanks thing). And, while salivating over the scenery a scrumptious lunch feast of quiche, salad, fresh bread and drinks is ready. Then it’s bon voyage Southern Cross and hello Hammer. 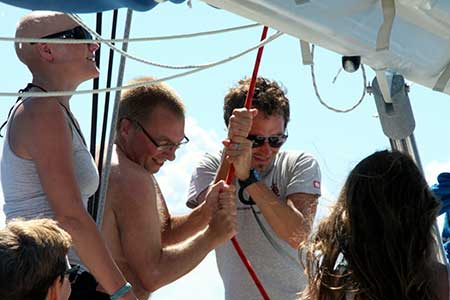 The Whitsundays on board the Hammer

Another old salt who looks good in all shades of sun protection is Mick Ekhert who has spent 13 years sailing and seen about 39,000 happy passengers over the years. Micko is the skipper of Hammer, another sexy, 75-ft pocket, ex-racing yacht with 22 people on board who are almost in a state of Zen they’re so chilled out.

But that’s what 48 hours with Whitehaven, Hook and Hayman will do for your soul and your holiday expectations. “Backpackers want value for money, what every traveller is looking for on a budget,” says skipper Mick. And you get it.

In fact, the sailing, snorkelling, scuba diving (for certified and beginners divers), accommodation, all meals, “seeing dolphins, turtles, sting rays and manta rays every time we go plus sunrises, sunsets and stargazing where we turn the lights off and watch the universe” is all included in a two or three day sail tour. 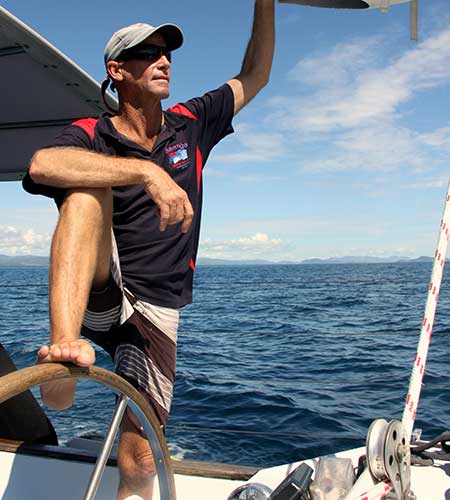 You just need to clean your plate, wash out the sand from your stinger suit and decide what sunscreen to wear. The crew also encourage you to do as little or as much as you like on board. “Some want to enjoy a quiet moment on the spit while others want to know all about the boat and how it works”.

A couple eagerly take the helm under the watchful eyes of Micko and his two-man crew which include local deckhand, trainee skipper and “glorified chamois technician,” as he puts it, Brendan Effeney, 21, and Fergus O’Neill, who’s 19 from Kent, UK, and recently cruised through a Pro Sail course.

“I love doing everything, the cooking, cleaning, working on deck and have met 1500-odd people in the last five months. I miss my own bed though but I’m a sailor at heart,” chuckles Fergus. 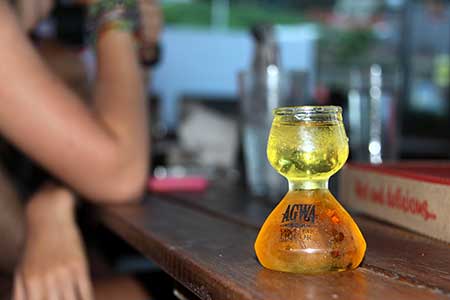 Before sundown it’s time for one last chance to look good in a lycra (stinger suit protection) so Fergus takes a few snorkellers out in the rubber duck (the tender) for a dip around Langford and I’m smitten by a sight I’ve never seen before in one camera frame; yacht, island, sand cay, a transparent sea, blue sky and way too many teeth grinning back at me.

We haul Nora, 20 and Eric, 23 from Kassel, Germany, back on board as well both gobsmacked after seeing their first turtle. “It was big and a metre away from us!” they scream.

Their awe is truly captivating but come 2.30pm it’s time to find a pair of land legs again. The deck is covered in bronzed, carefree expressions for the cruise home so I join in, lie back and snap the clouds, mast and sail smiling about how 23-year old Nathan from Foster, UK, describes this very moment. “It’s top draw”.

The writer travelled on the Sunlander train from Brisbane to Cairns (from $162pp). See queenslandrailtravel.com.au. Explore Whitsundays do 3 day/2 night tours on board the Southern Cross from $509pp. See soxsail.com.au.

Possible wreckage from MH370 found in the Indian Ocean off Perth

Tony Abbott: ‘I’m too much of a grog monster’ – Opposition in leader in bizarre radio admission

Looking his age: Cat in Britain celebrates 27th birthday by lying down, licking itself