The incident is one of several security hitches that have come to light in the last few days after a G4S security guard was accused of spitting at a soldier and lady in red gatecrashed India’s parade during the Olympic opening ceremony.

Scotland Yard has admitted that police responsible for security at the Olympic games lost the £40,000 set of laser keys after carrying out a security sweep of the stadium last week.

The keys were mislaid during a final security sweep ahead of the Olympic football matches that will be played in the Wembley stadium.

The blunder was significantly more serious than your average key-losing scenario and teams spent several days scouring the venue for the missing item.

The Evening Standard reported a source as saying: “These were hi-tech laser keys which cost anything up to £40,000 a set as they cannot be copied. They are the same as you get at prisons.”

However, the Metropolitan Police is playing down the incident. A spokesman said: “On the morning of Tuesday 24 July officers on Olympic police operations at Wembley Stadium reported that internal security keys, being used by them as part of searches, were missing.”

“Detectives also attended to ascertain if there was any evidence of criminal offences, there’s none at this time.

“There is absolutely no security concern in relation to the stadium as measures were taken immediately to secure all key areas of the venue.”

Security arrangements for the London 2012 Games have been beset by setbacks. Thousands of military personnel and hundreds of police officers had to be drafted in at the last minute to help secure Olympic sites after security firm G4S admitted it did not have enough security guards to do the job.

G4S has not yet put its worries to rest however and today one of the security firm’s staff was accused of spitting and hurling verbal abuse at a serviceman drafted in to help.

The security guard is alleged to have called the soldier a “baby-killer” after the soldier asked to search him, apparently in reference to the man’s time serving in Afghanistan.

G4S said it was “urgently investigating claims of an altercation between a security officer and a soldier”. 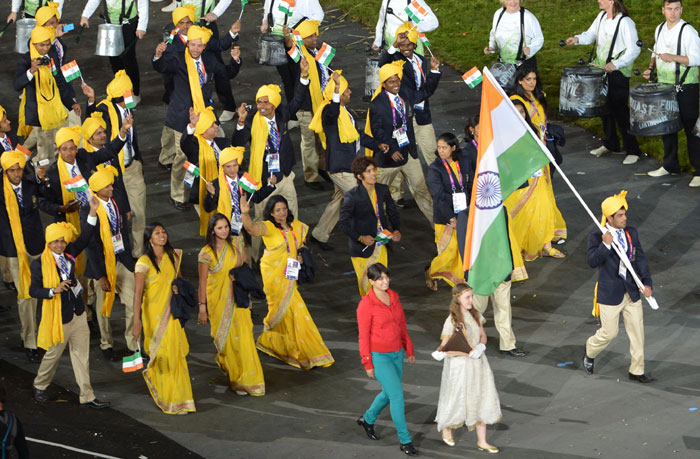 Meanwhile India is demanding that those in charge of security at the Olympics investigate the mysterious appearance of a lady in red during India’s parade at the opening ceremony.

Madhura Nagendra,25, gatecrashed the event and walked with the Indian team who were in saris, blazers and yellow turbans.

India claimed the ‘lady in red’ did not have accreditation and have written to Logoc requesting a full explanation.