Opinion: Stereotypical bloody Aussie cliche – A 37-year-old mother of two in the ‘burbs

It’ll be from a man, white more than likely, with a boorish or cocky tone, be wearing a wife-beater (singlet), Stubbies (shorts) and thongs (thongs, or flip-flops if you’re from the UK. Yes, we know a thong is a g-string but your name sounds almost as silly as jandels).

Obviously the reality is far from it, mate, and has been for yonks.

New Bureau of Statistics info tells us the average Aussie is in fact a 37-year-old mother of two who lives in a three-bedroom house in a suburb in a city.

So not this bloke.

As Australia ticked over 23 million people this week, we were told the “average Australian” is still born on the big island, just like her parents were. But give that time as 26 per cent of Australians are born off-shore while 48 per cent (such as this little black duck) have a parent born somewhere else.

One in five (19 per cent) Aussies speak a language that isn’t English – most commonly Mandarin due to the influx of new Australians from China – at home.

The largely white Anglo-Saxon Aussie cricket team now has names such Khawaja (Usman from Islamabad) and Henriques (Moises from Lisbon) in its ranks. 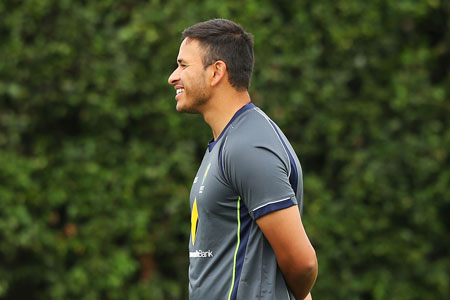 But is how that Aussie stereotype is portrayed overseas changing? Not really. I play sport in mostly English teams and among other things get called Barbie (courtesy of the meat-cooking device, not my unrealistic proportions, I’m sad to say) or Mick Dundee (I’d prefer to avoid wrestling a crocodile if I can help it).

Last night at an anything but fancy pub in east London a bloke, very much a local, heard me order a beer that wasn’t lager and said, “Shouldn’t you be drinking Foster’s, mate?”

I gave him the token line of “No Aussies drink Foster’s” and something about the Ashes – banter 101 – and he was on his way. The friendly local gave me a hilarious, “Have a good one cobber” as I left after the football (during which I was asked by a German guy who I was supporting between Barcelona and Bayern Munich and if they play football in Australia).

Foster’s has a lot to answer for when it comes to the image of the uber-tanned, laid-back “g’day mate” style Aussie bloke. Hardly an insult, although sometimes used as one, their whole “Good Call” campaign (see video) is just two Paul Hogans in boardies with a cool shed.

Foster’s sells on the false image of Oz cause it goes down a treat when selling cold beer, and more people than should buy it (seriously people, why?).

The bikini clad girls represent Australia more than the lads do though – only because they’re women.

Australia has a prime minister (Julia Gillard), a governor general (Quentin Bryce) and a richest person (Gina Rinehart), who are all women. Forgetting Gillard wasn’t voted in with a majority, Bryce was appointed and Rinehart’s fortune was gained after a pretty handy inheritance from her dad, their status reflects the country.

Oz has gone from six to one in favour of men after settlement in 1788 to a century ago the average Aussie was a 24-year-old guy and 50 years ago a 29-year-old male. Women overtook men in 1979, and have been stretching the lead and getting older.

So basically, the Aussie stereotype actually can be found on TV’s Home and Away or Neighbours, but it’s not the hunk on the beach, or even the babe destined for the cover of Woman’s Day when she hooks up with a footy star – it’ll be the mum with a bit of somewhere other than England in her genes.

Miley Cyrus is the new face of Marc Jacobs